Yes, it can continue for Joey Meneses with an improbable walk-off HR! 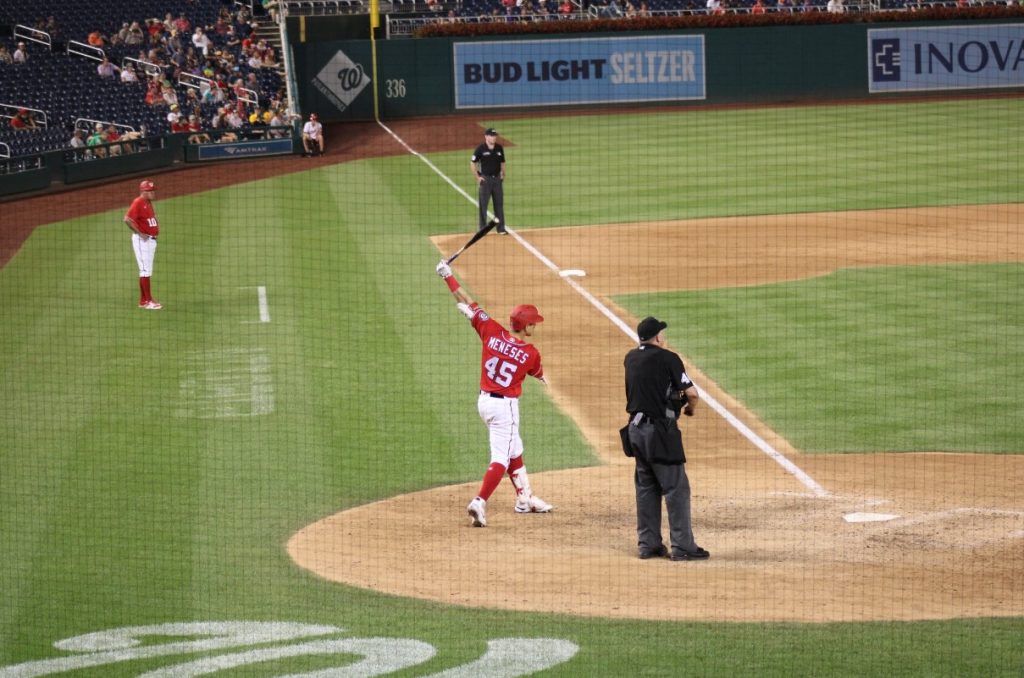 Joey Meneses seconds before he hit the walk-off HR; Photo by Sol Tucker for TalkNats

Last week, I wrote about the improbable run of Joey Meneses  and what makes him different from other older rookies, or in this case, he is a 30 year old rookie doing what no other player has done in a Nationals’ uniform. His movie script isn’t fully written and that’s why we play the games. Would you believe tonight he hit his first career walk-off in a 2-strike, 2-out, extra inning situation with his team behind by a run. It was a 3-run smash. As he rounded the bases, the fans who remained were chanting, “Joey, Joey, Joey, Joey.”

The home run was hit off of a low slider at the knees and went oppo with an exit velo of 102.7 mph and  34º of launch angle. The ball just had enough on it to clear the 14 foot out of town scoreboard in right field and landed in the first row 389 feet from contact. Some are comparing Meneses to Nats’ legend Howie Kendrick.

As I wrote last week, “I can’t tell you the rest of the Meneses story because it hasn’t been written yet.” Real life will play this to its natural conclusion, and you’re there for the ride, and tonight was one of the most magical rides like a scene out of a Disney movie. This is a true life story though. Even though the Meneses’ career is just 25-games completed since his MLB debut, he continues to surprise us on a daily basis.

“Obviously when you see someone on TV hit a walk-off, you think about it and think how it would feel. But in the moment, the adrenaline is very different for you. The feelings are very different. It’s just something very great.”

How did Meneses finally get a chance on a Major League diamond? As a result of the Juan Soto trade on August 2nd, this career minor leaguer got his call-up to the big leagues and has made the most of it. Many have called him a flash in the pan. Born in 1992, making Meneses thirty years of age just like Aaron Judge — and nobody is skeptical of the Yankees’ star or the mega contract he’s going to sign shortly.  While the longitude of Linden, California where Judge was born isn’t too dissimilar from Culiacán, Mexico where Meneses was born, their childhoods and path to the Majors were so divergent.

Over the course of his professional career, Meneses has split time between minor league teams, and international teams from Mexico to Japan to small towns you’ve never heard of like Pearl, Mississippi where mosquitoes are the size of butterflies but dreams are larger.

On the Meneses résumé is an NL East tour that started with the Atlanta Braves organization in 2011 as a teenager. He made it to the Philadelphia Phillies minor leagues in 2018 where Meneses won their MiLB MVP award. These were minor league jaunts that kept the dream alive. After the Phillies cut him loose, he played for the Orix Buffaloes of Japan and teammates with former Nats first-rounder Chris Marrero. Japan didn’t work for Meneses, and he returned to North America.

Over the course of 12 seasons in the minor leagues, Meneses hit for a very respectable average of .281. During his MVP season for the Triple-A affiliate for the Phillies, he had an average of .311, while hitting 23 HR’s with 82 RBIs.

As of tonight, Meneses is batting .354 with a 1.011 OPS in his short MLB career. He’s put up much bigger stats than the 23 year old, future Hall of Famer, who he replaced on the roster. But we know that he’s no Soto. He is Meneses. We know it’s only 25 games and 104 plate appearances. We just don’t know what comes next. We know from experience that these numbers cannot be sustainable in full season, or can they?

“He’s been doing it all year,” manager Dave Martinez said. “We’ve been watching him all year, even in Rochester, and he’s been hitting all year long, and nothing has changed. That’s one thing that I reiterate to him is nothing changes when you come up here. You drove the ball from right field to left field. Just do the same thing, stay on the ball, and he’s been awesome.”

Teams stay skeptical of giving players older than 26 a first chance. Jayson Werth was cut loose by the Dodgers at 27, but he got another chance because of that 1st round pedigree. Meneses was a mutt in the eyes of evaluators. But he was at the right place at the right time with the Nats.

Much like Yadiel Hernandez, this is a great opportunity for an older rookie. You have to stay hungry and remember those mosquitoes from Pearl, Mississippi, and those fans who booed you in Reading, Pennsylvania. As soon as you get complacent thinking they need you, it’s over at that point. You need them, and you’re only as good to them as your last hit.

When Meneses was called up, we wrote that he was borrowing other players bats to use. He finally got in a shipment of Old Hickory bats on August 23 per our conversation with Travis Copley of Old Hickory. This bat has his own specifications in a YP model of 🍁 maple wood that is 34 inches in length and 31 ounces, and JOEY MENESES branded on the bat barrel. You can’t see the metallic gold Old Hickory logo clearly because Meneses adds a thick shmear of pine tar. We can confirm that tonight he hit the walk-off home run with that bat. He used a different bat the night before, and went 0-4 and switched to the Old Hickory.

But we need you Joey Meneses. Even in a lost season, there’s a reason to watch. Joey, you are the Disney movie. You’re the real-life rookie.

Celebrate the 1st walk-off of 2022 pic.twitter.com/ZoTvQFTJ1m