Beyond the rankings: non top 30 prospects that can help the Nats 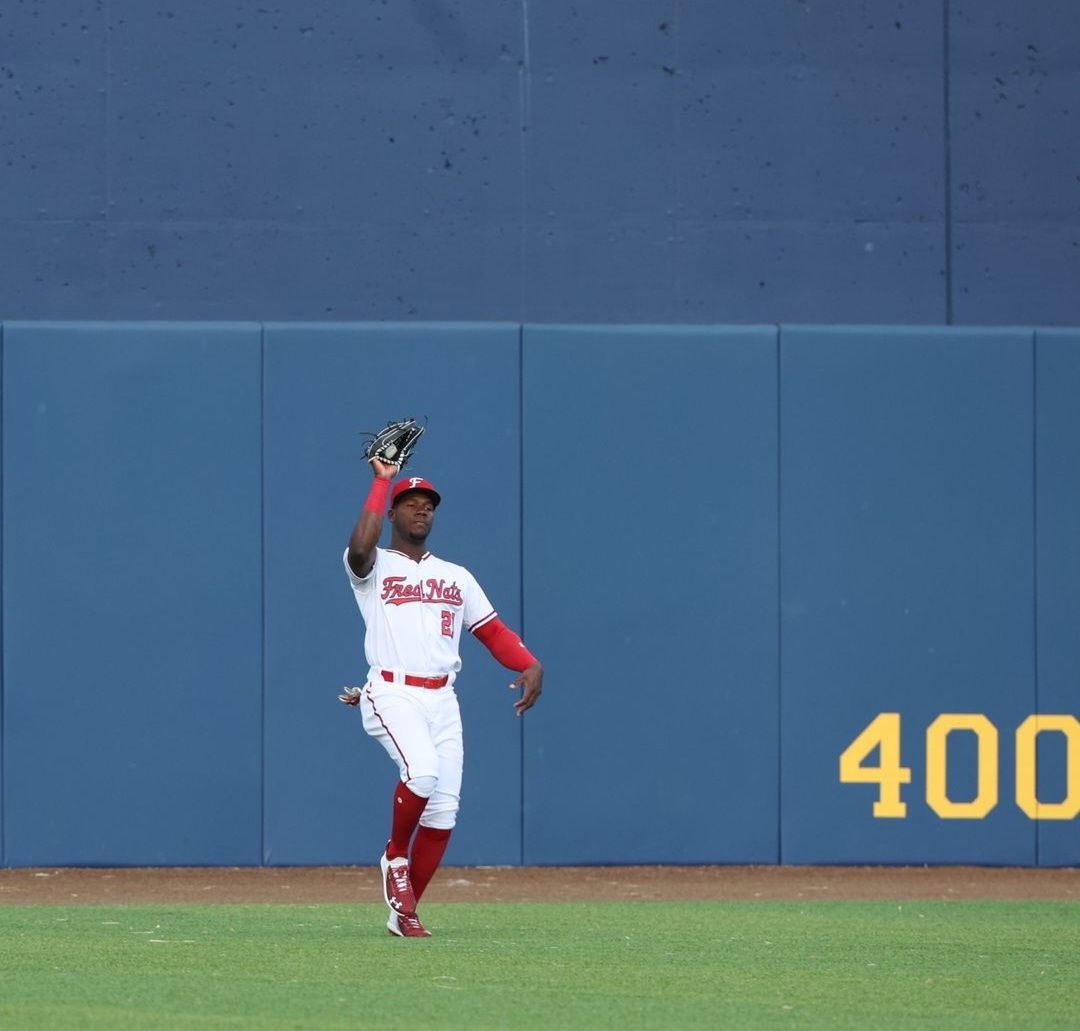 Every major league team prides themselves on having a strong farm system. The pinnacle of this talented pipeline for young players is seen in consensus lists that include the top 15 to 30 players in a given system. As the Nationals undergo their rebuild, it is important for their top prospects to play like it, but the hidden gems in an organization are the ones that can propel them to success. Recent examples include players like Yadiel Hernandez and Kyle Finnegan prove that being a top prospect is not everything in terms of being able to contribute. Countless examples of players like this exist and each contending team likely has multiple players who did not receive top billing. For the Nats, there are a number of these players currently in their system.

Nick Banks, OF: Banks is a 26 year old from Texas A&M who was drafted back in 2016, and is currently on the 7-day IL. He has taken time to develop as he was merely 18 when he was drafted. Nonetheless, he has blossomed this season in AAA. Playing in one of the most hitter friendly parks in all of AAA, Banks has sprayed the ball to all fields. He has never truly been a power hitter, but he has driven in runs at a respectable rate. His slash line of .355/.566/.961 illustrates some of his tremendous bat skills for the Red Wings. The Nationals have a lot of talented outfielders currently towards the top of their system. This puts a strain on his future outlook. However, injuries are a part of the game and having players who can step in and produce is a key facet of baseball.

Joey Meneses, 1B: As one of the most incredible stories this season, Meneses has made a true push for his MLB debut. The 30 year old first baseman has caught the eyes of many due to his incredible hitting stats so far this season. He has already clubbed 13 long balls with 39 RBI with a slash line of .335//581/.967. The Nationals have struggled to find any sort of depth at first base behind Josh Bell, trying to convert different players to learn position. Possibly, the Nationals have an answer to this question residing in the minor leagues. Afterall, the same situation that worked out for Yadiel Hernandez might just be in play here with Meneses.

Jackson Tetreault, P: For anyone who has followed along with the Red Wings’ season, two things are apparent: the team can hit and Tetreault has seriously impressed. Although he is not carrying the same prestige as a pitcher like Cade Cavalli or Cade Henry, he has been more productive this season. In his 12 starts this season, he has a 5-3 record with a 4.19 ERA in exactly 58 innings. Similar to the stats of the hitters, Tetreault’s statistics do not tell the entire story as Rochester does play in a very hitter-friendly stadium. One thing that might translate well to the MLB is his control. His 52 strikeouts compared to just 24 walks have turned heads in the Nationals front office as he has truly made a name for himself and will likely be seen in the MLB before long.

Jake Alu, IF: In the past calendar year, Alu has done nothing besides hit. One of the best pure hitters that many casual observers have yet to notice, Alu has once again improved at the plate. This season, he is batting .257/.444/.759 with seven dingers and 30 RBI. The batting average does not tell the entire story for Alu, illustrated by the fact that his slugging and OPS are so much higher. With the Nationals dealing with injuries and ineffectiveness at different infield spots, a ripple effect could allow for Alu to receive another promotion in due time.

Matt Brill, P: Matt Brill has certainly been around the block. He has never pitched above AA. Brill is enjoying his most productive season to this point. As the primary closer for the Senators, he has done nothing besides dominate. His record of 2-1 and miniscule 1.93 ERA already give him the attention of many evaluators. Adding onto those totals are 9 saves that have seen him get 18 punchouts and only surrender 11 walks and a singular home run. With the Nats hurting in the bullpen, there is a real chance that the organization will give Brill the chance to continue his strong season at a higher level.

Alex Troop, P: Alex Troop has been waiting for this season ever since he was drafted in the 9th round out of Michigan State back in 2017. The left hander has been used in both the rotation and bullpen thus far. He has been spectacular in both roles. His 2.67 ERA in 33.2 innings mirror this claim. However, the astounding strikeout to walk ratio of 43:9 is arguably more impressive. One thing that has been noticed by many this season for a lot of the Nationals’ young pitchers has been a lack of control. For an organization predicated on pitching, Troop has fit right in and is turning in his best season to this point.

Omar Meregildo, 1B: As previously noted, the Nationals have very little organizational depth at first base. One of the young players looking to change that narrative is Omar Meregildo. The 24 year old from the Dominican Republic has been tremendous this season. His slash line of .278/.500/.858 is excellent, but so are his nine home runs and his 34 RBI. All of this combined to make him one of the best hitters this season in Wilmington. One area of concern might be his strikeouts as he already has 63 of them this season.

Seth Shuman, P: Shuman was one of the players acquired from the Oakland A’s at the Trade Deadline. Historically, the A’s are known for their prowess in pitching development. Shuman is no different seemingly. In his first full season pitching in the Nats’ organization, he has put up exemplary numbers. He has a 1-0 record with a 2.41 ERA in 33.2 IP. Compounding these stats, he has accumulated 30 strikeouts and only 7 walks. He has kept the ball in the yard, only surrendering two home runs. Shuman is likely going to see himself moving up to face some stiffer competition in the coming weeks.

Tyler Yankosky, P: Perhaps the best pitcher for Wilmington, Yankosky has surprised just about everyone in the organization this season. A 19th round pick out of Millersville University, a small school in Pennsylvania, Yankosky has been fabulous. So far, he has a 2.08 ERA in his 26.2 innings of work. The most astounding stat for him, though, is the fact that he has yet to walk a batter. Considering the fact that he has played so many games without a walk, Yankosky has made a name for himself and is well deserving of a bump in competition in the near future.

Rodney Theophile, P: Theophile is not only a hidden gem in the organization, but a player who has improved greatly from just a season ago. In 2021, he had a record of 4-11 and a 5.56 ERA. For a player who was 21 at the time, those are not horrible. This year, though, he has looked like a different pitcher. In 48.2 innings, he is 5-1 with a 1.29 ERA. Theophile has honestly become one of the best pitchers on a Fredericksburg team that has become more known for their impact bats. Another aspect of his game that has improved has been his control. After walking nearly half as many batters as he struck out in 2021, that percentage is closer to 25%. Only time will tell if this is sustainable for Theophile, but he will be a pitcher to watch in the near future.

Leandro Emiliani, 1B/DH: The FredNats have one of the best minor league lineups in the country, but one of the lesser known names deserves recognition. Leandro Emiliani has played at a very productive clip. The 22 year old from Colombia has a .266/.566/.897 slash line, eight homers to go along with 27 RBI. In addition, he has cut down on his strikeouts, fanning only nine times so far this season. In a lineup with a lot of pop, Emiliani has made a name for himself and put himself on the radar of many executives.

Viandel Pena, 2B: Unlike some of the other players currently in the Fredericksburg lineup, Pena is not a power threat. He is more like Dee Strange-Gordon than anything else. Pena is hitting .299 this season with a mere 20 RBI. However, he uses his speed and quickness to impact the game with eight doubles, four triples and 13 steals so far this season. If he continues to develop his bat and can hit for a little more power, he might be on the fast track to the next levels.

All of these prospects, different as they might be, have the potential to impact the future of the Nationals. Some of them will get that opportunity, while others will not be so lucky. The one thing that every organization relies on is the ability to develop prospects who are less talented or have less prestige as “blue chip” players. Regardless, the Nationals have some very capable contributors in the minor league system and some are going to be ready to help very soon and for a long time.

This entry was posted in Analysis, Draft, Prospects. Bookmark the permalink.
← Previous Article | Next Article →