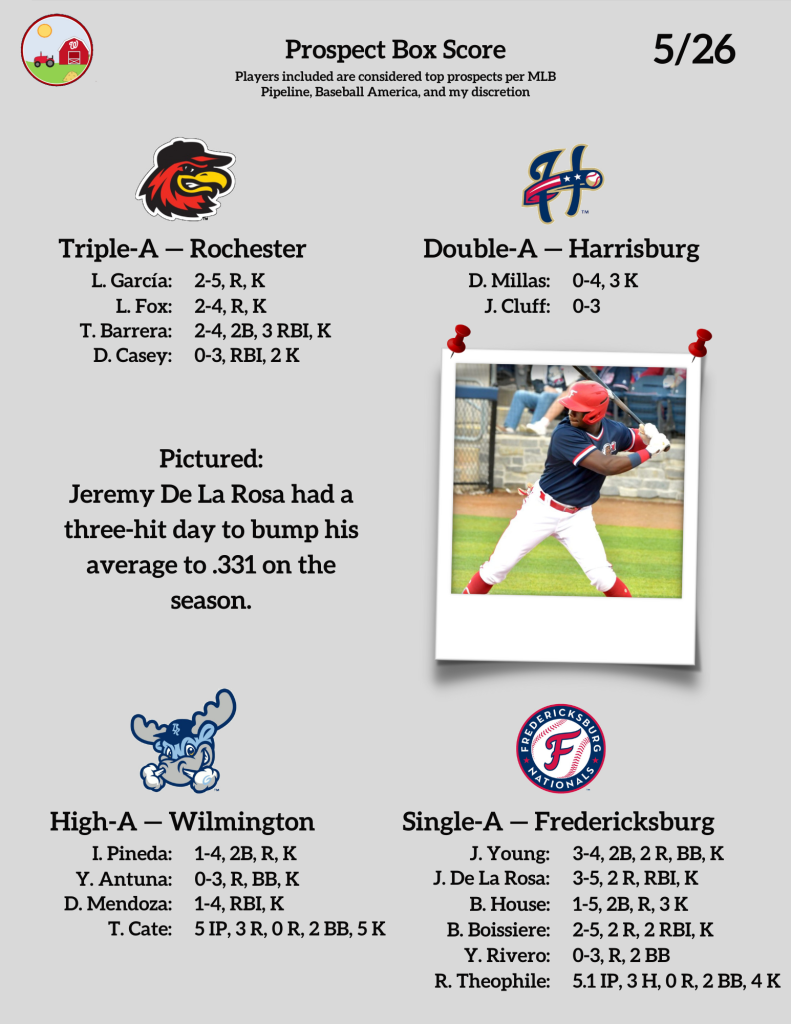 Luis Garcia was back in Rochester’s lineup following a collision on Tuesday, so it seems that he’s good to go injury-wise. Certainly a relief.

Rodney Theophile was on the bump for the FredNats and he was tremendous once again. He gave the team a much needed quality start, going 5 1/3 of shutout ball. Theophile is on the old side for Low-A, as a 22-year-old, and 1.45 ERA with 55 strikeouts in 43.1 IP is surely good enough for a promotion to Wilmington.

The offense broke out with 16 hits including three-hit days from Jacob Young, Jeremy De La Rosa, and Andry Arias.

More great pitching from the bullpen and Fredericksburg won 12-1.

The Blue Rocks looked to even up the series against the IronBirds, but the offense could only scratch across two runs. Cole Daily and Jose Sanchez both had two hits.

Tim Cate spun five shutout innings with only three hits allowed – a good outing from an otherwise struggling prospect. The back-end of the bullpen surrendered five runs and that’d be all she wrote.

The Senators dropped another one after spotting the Curve five runs early in the game. They just can’t seem to keep up with Altoona’s offense.

Ehire Adrianza played third base, shortstop, and second base in the game as he works towards a comeback to the big leagues.

Jack Dunn had two hits and two walks along with a tremendous catch crashing into the centerfield wall.

The Red Wings had to use six pitchers in the game to keep the Mets to seven runs.

8 runs in the 7th and 8th thanks to two Joey Meneses homers and three RBI from Tres Barrera would propel the Wings and Jordan Weems came in with one out in the 9th to shut it down.

The Nats’ minor league system had a much better night than the previous few, but still a lot to work on all around.