Nelson Cruz is a luxury item; Nats make their biggest move of the winter! 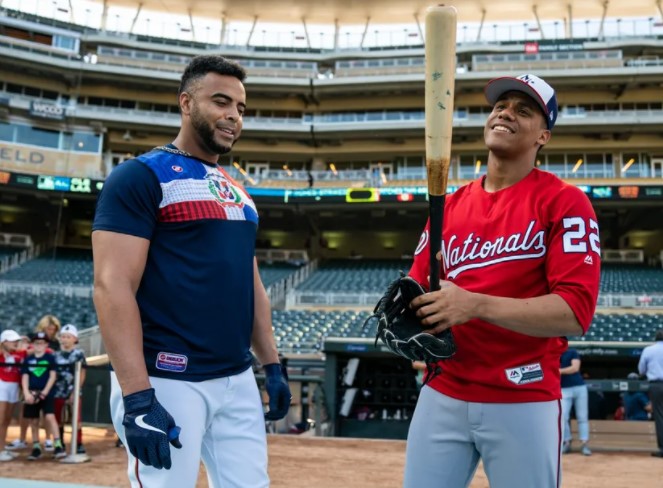 Yes, technically it is still winter in atmospherical terms for another five days. While the Boys of Summer are in Spring Training, the lock-out has made the month of March a frenzy to make final pre-Opening Day roster moves. The Washington Nationals have made a whole bunch of moves, not all official yet, but nonetheless they should all happen as reported. The biggest move so far, for the Nats this year, was the deal for Nelson Cruz.

Cruz, 41 ¾, has his next birthday on July 1 when he will turn 42. Compare that to Ryan Zimmerman who is nearly five years younger. The universal designated hitter certainly boosted up the value of most big bats available in the market. Cruz cashed in for a guaranteed $15 million payday with a $12 million one-year salary and a second year mutual option with a $3 million buyout. Here is the crazy math that if the Nats trade Cruz near the July 31 deadline and another team picks up the remainder of his contract, the Nats will only be on the hook for $8 million. But this is a gamble for Mike Rizzo and the Nats payroll. If Cruz isn’t smashing home runs at his normal pace, he might not be tradeable.

This move also has some symbolism to it. The Nats had to show they were spending. They had to outbid other teams to get a highly coveted player like Cruz, and the Nats’ ownership had to show their fans that they were going to put some new star power on the field. They also had to show Juan Soto that they were not going to sit on the successes of 2019 and prior and tank in 2022. Soto knows Cruz, and by the looks of Soto’s Instagram yesterday, he turned it into a welcome to D.C. for Cruz and “The boomstick team.”

“I mean, when you see a guy like that … just amazing,” Soto said. “You’re seeing a Hall of Fame player. Getting to know where he comes from and where he is right now, it’s just amazing what he’s done — not just for baseball but for the Dominican Republic.”

Maybe the craziest part of this new Soto-Cruz relationship is that Cruz, who is also from the Dominican Republic, signed with the New York Mets as an amateur international free agent months before Juan Soto was born in 1998. Also, Zimmerman made his MLB debut weeks before Cruz during that 2005 season. Zim, of course debuted with the Nats, Cruz, briefly with the Milwaukee Brewers for all of five at-bats before he was traded in a blockbuster to the Texas Rangers.

While Soto referred to Cruz as a Hall of Fame player, time will tell on that after Cruz was suspended in the Biogenesis debacle in 2013. He is just 51 homers from the 500 Home Run Club.

“[Three] days ago I talked with Juan Soto about the possibility that I could sign with the Nationals,” Cruz said to Hector Gomez. “The Nationals are a team with high expectations, a lot of tradition, and now I will have the great opportunity to join Juan Soto, the best hitter in the National League.”

“Another important fact for which I accepted the Nationals’ offer was because the team executives told me they’re going to make a lot of big moves to make this team competitive.”

Interesting words from Cruz especially the part that the Nats executives told him that “they’re going to make a lot of big moves to make this team competitive.” Define “a lot” because it is hard to see that the team will make more than one or two big moves.

Our sources have told us that general manager Mike Rizzo is active out there and not every player he wants, can be acquired. The player also has to say yes, and Cruz said yes. Will others? So far in the fold are a lot of fringe players, and some old familiar names like Anibal Sanchez, Gerardo Parra, and Sean Doolittle. Yesterday, Ehire Adrianza and Steve Cishek‘s deals became official.

Those two signings brought the Nats’ 40-man roster to a full 40. The team will have to make a series of roster moves once Cruz and Doolittle’s deals become official. That will mean we could see DFAs, 60-day IL moves, and/or trades to get players off the 40-man roster.

Speaking of trades, yesterday a Nats’ source told us that Rizzo has been looking at trades but would not trade any top prospects. Any big trade would most likely be for a salary dump type of situation. Sure enough hours after our tweet, the Reds dumped Eugenio Suarez with Jesse Winker to the Mariners for a package of mostly quantity over quality. The best minor leaguer to go to Cincinnati in that trade was their №7 rated prospect. Of course that prospect might have been the equivalent to a №4 in the Nats system like Cole Henry as it is difficult to compare apples and oranges in this case.

The point is, Rizzo is looking at more than just trying to sign free agents, but again, it takes two to tango to get any deal done, and in the case of blockbuster trades — it is like a line dance.

This entry was posted in Feature, MikeRizzo, Roster, SpringTraining. Bookmark the permalink.
← Previous Article | Next Article →