The signing of Cristhian Vaquero is official! 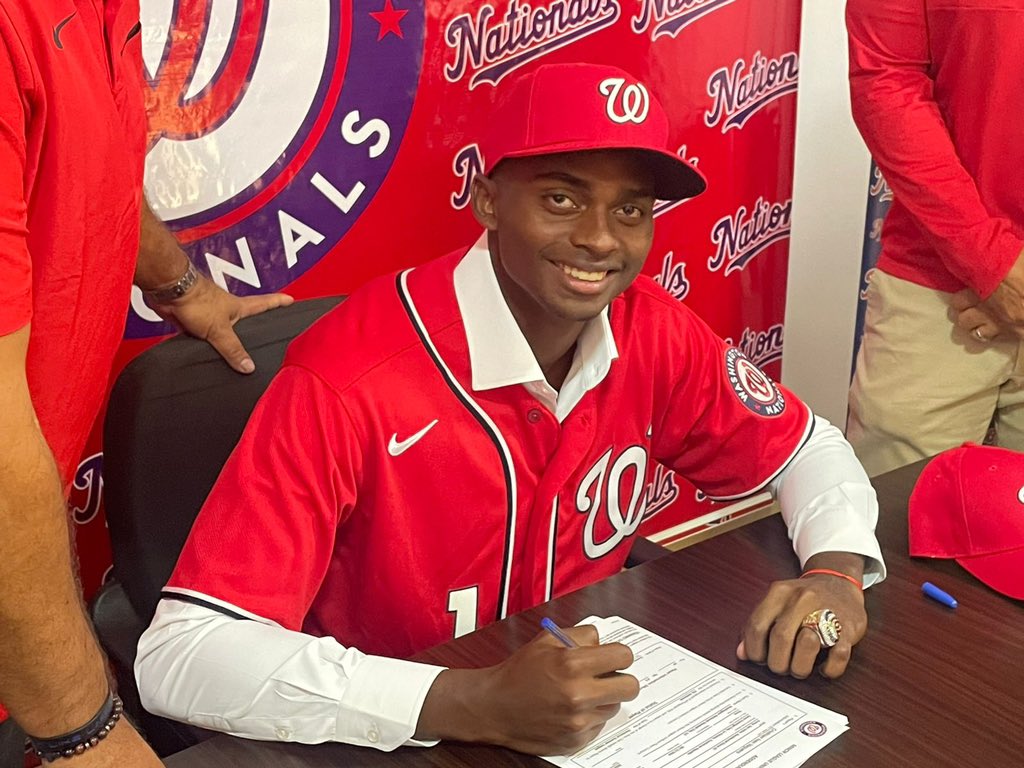 Photo provided by the Washington Nationals 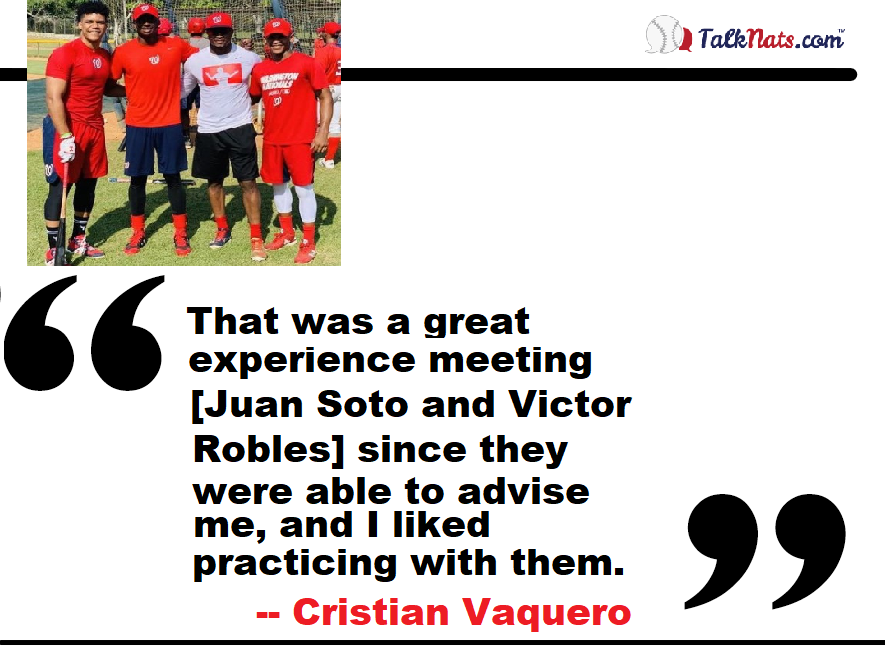 The Washington Nationals had an unofficial agreement with Cristhian Vaquero in place for well over a year. And finally the waiting is over as the Nats made this signing official and added another top prospect to their farm system. Vaquero will start working out at the team’s Dominican Academy.

With the international signing period pushed back from July to January, Vaquero turned 17 already on September 13. According to Baseball America’s rankings of signing bonuses,  Vaquero will receive the largest signing bonus in this class.

Cuban OF Christian Vaquero is expected to sign with the Nats for close to $5M. Known as The Phenomenon.

In the newest rankings on MLB Pipeline, they have Vaquero as their second best international player eligible to sign at this point. They have Roderick Arias, a shortstop from the Dominican Republic, as their top player. MLB Pipeline writes this on Vaquero:

Vaquero was originally a left-handed hitter, but he learned to switch hit once he left Cuba, which has resulted in improved pitch recognition and more confidence at the plate. At 6-foot-3 and close to 190 pounds, he is a physical specimen with tons of raw strength and power. He can really cover ground in center field, shows a strong arm and has a chance to be a plus defender at the position. He plays hard with lots of energy and shows tons of natural instinct in practice and in games.

Consider this: If Vaquero was in the US, he would be a high school sophomore and on track to be a top five pick in the Draft in a couple of years.

Originally from Cuba, both of Vaquero’s parents were athletes on the island. He has been working out in the Dominican Republic with trainer Javier Rodriguez, a member of MLB’s Trainer Partnership Program. The Nationals are the favorite to sign him.”

The start of the international signing period which was traditionally on July 2, was moved to January 15 after the COVID pandemic changed everything in 2020. For prospects from Latin America and the Caribbean, and foreign locales all around the globe including Australia, South America, and Europe, this international signing period is the beginning to a pro baseball career.

For those wondering, it appears Vaquero will be represented by Scott Boras as his agent. Boras who just turned 69, will be close to 80 years old when Vaquero is set to be a free agent around 2032.

Currently measured at 6’3″, Vaquero has grown into a larger frame and should continue to broaden to a wider base. Keep in mind, as mentioned, he is just 17 years old. The teenager began showing advanced baseball ability at an early age. He made his first Cuban National Team at the age of eleven. The Cuban National Team competition took him to events at Disney’s Wide World of Sports Complex as well as to Chicago. It was there he had the opportunity to meet fellow Cuban Jose Abreu of the Chicago White Sox and quite possibly convinced him to head to the Dominican Republic to further a baseball career in the U.S.

Vaquero was born into an athletically accomplished family. His mother Elizabeth competed as a swimmer on the Cuban National Team. Also, while in Cuba, his father competed nationally in Judo. Vaquero counts his two major baseball influences as Ken Griffey, Jr. and Mike Trout because of their five-tool ability.

With Vaquero projected to sign with the Nationals, he could move quickly into their Top-10 prospects and strengthen the farm system. Last year the Nationals signed Armando Cruz to the largest international signing bonus. This seems to be a trend for the Nats to make sure they spend the most on one player to get who they believe is the best player.

“I want to say that I thank God, my parents, and the coaches of this Academy, mainly Javier [Rodriguez] for everything that I am living in these moments,” Vaquero told me.

In January of 2020, Vaquero got to visit the Nats complex in the Dominican Republic, and got to meet Juan Soto and Victor Robles and work out with them.

“That was a great experience meeting them since they were able to advise me, and I liked practicing with them,” Vaquero continued in our conversation.

Yes, Vaquero, a natural lefty, has been batting as a switch-hitter with Rodriquez. His tools boast plus speed, a strong arm, and the makings of a player who you could see in centerfield which is the position he has been playing.  With the bat, he has been showing increased bat speed and power. 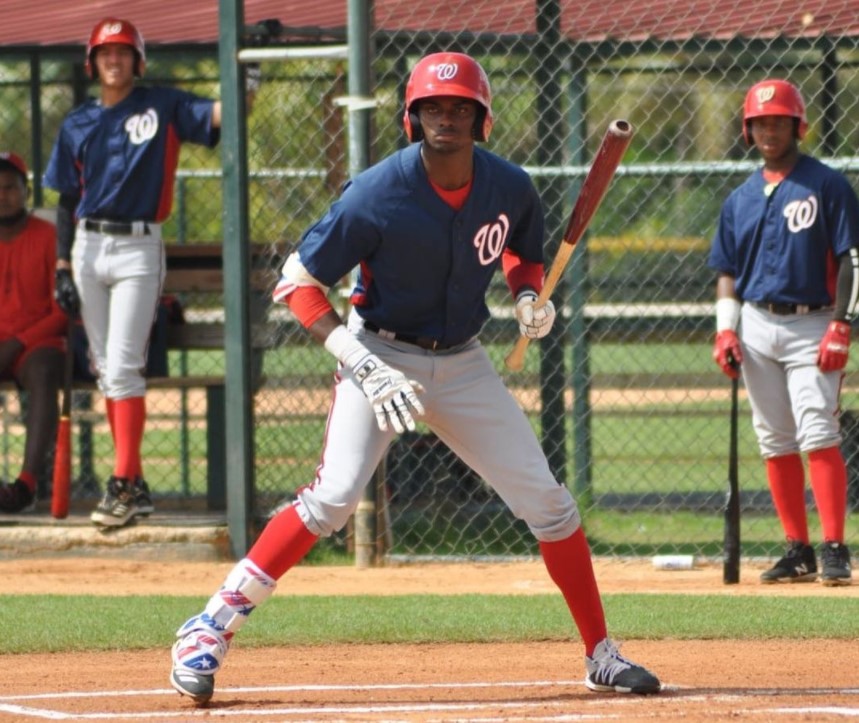 If Vaquero, aka The Phenomenon, becomes the star player who many expect, the Nationals will have been a big winner on this day.

This entry was posted in MikeRizzo, Prospects, Roster. Bookmark the permalink.
← Previous Article | Next Article →