What’s next this offseason for the #Nats? 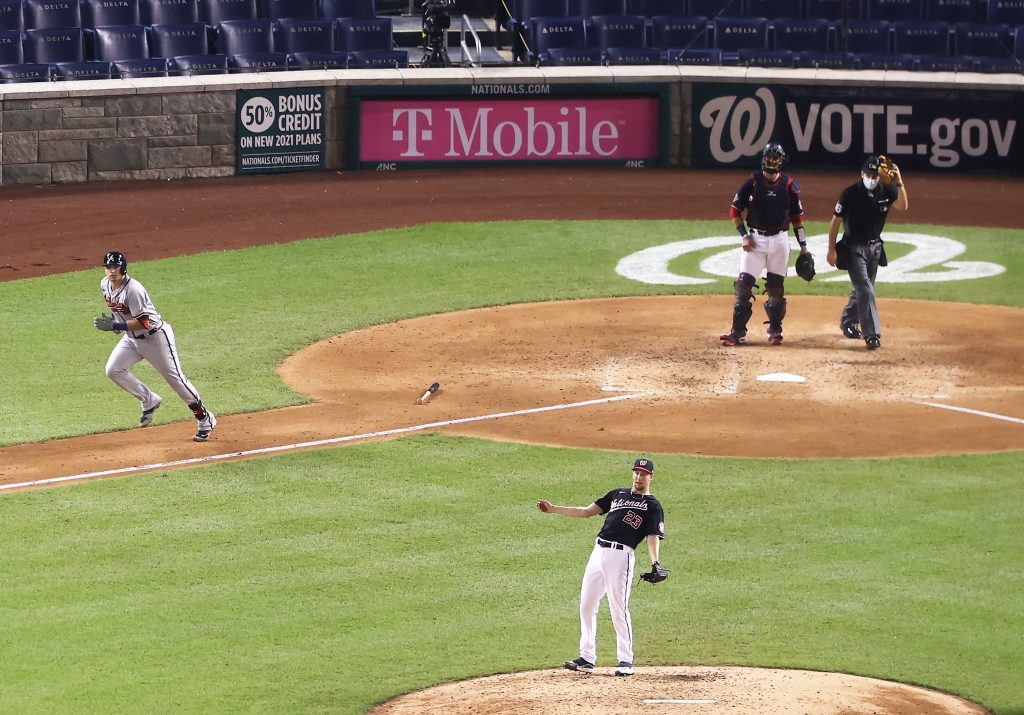 Erick Fedde watches one fly during a June 2021 game against the Atlanta Braves.

As we all “enjoy” another “thrilling” MLB postseason, the Washington Nationals are getting ready for what will be the most unusual offseason they have had in quite some time.

Nats management has been careful about the “r-word”. No one wants to definitively say the Nats are a rebuilding team, with general manager Mike Rizzo preferring to say this is a reboot. No matter how you slice it, the Nats were really bad in 2021, not much better in 2020, and don’t look like they have a lot of help on its way from one of baseball’s lowest-rated minor league systems.

On the flip side, payroll is way down, so is the roster’s median age, and the Nats have a lot of control over what their 2022 Opening Day roster looks like. They have few pending free agents and a number of players “on the bubble” who might or might not suit up for the team next year. Much of this is up to Nats management.

At present, the Nats have 37 players on the 40-man roster:

You’ll notice just two of these players already have 2022 contracts: Corbin, who is now midway through a six-year deal signed before the 2019 season, and Escobar, who signed a one-year contract extension earlier this month.

It will be interesting to see what the Nationals do with their bullpen this winter. If you want to try out something interesting by yourself, bet365 bonus is here for you!

Mike Rizzo, the team’s general manager, may feel that his team requires an experienced closer, as well as a veteran setup man, to relieve some of the strain on the team’s younger players. Rainey, however, is the member of the current bunch most likely to factor into the late-inning mix.

Rainey will enter spring training as one of the more fascinating pitchers on the club, due for a little increase through arbitration (if he qualifies as a Super Two player). The Nationals will want to see him in good shape. They’ll be looking for his fastball to stay in the upper 90s. They’ll also want to see his slider consistently shatter.

Even if they find someone else to pitch the ninth, Rainey will continue to pitch in a setup role. If they don’t, they’ll likely name him closer before the season starts, hoping he’ll be ready to take a significant stride forward in a career that has included plenty of eye-opening moments as well as plenty of close-your-eyes meltdowns.

Once the Los Angeles Dodgers (ugh), Atlanta Braves (ugh), Houston Astros (ugh), or Boston Red Sox (ugh) win the World Series, a few things will happen in short order. The morning after the World Series is over, eligible players will officially file for free agency.

The big name here, obviously, is Zimmerman. He’s the longest-tenured National and carved out a respectable role this year as a platoon bat, starting almost exclusively against left-handed pitchers. Rizzo has already said Zimmerman will be back if he wants to play again in 2022, although the 37-year-old is openly contemplating retirement. But all five of these guys were essentially role players this year, and Avilán was a nonfactor after tearing his UCL in April.

On the fifth day after the World Series, teams will lose exclusive negotiating rights with their free agents, who will then be free to sign with any team. Also by that day, teams are required to activate players from the 60-day injured list, either returning them to the 40-man roster or designating them for assignment. The Nationals have five players on the 60-day IL:

If you’re following the math here, the Nats project to have 33 roster spots available at this point, with the four pending free agents on their 40-man roster subtracted from the 37 players currently on said roster. That’s more than enough to accommodate the four players from the 60-day IL who will need to be activated by the fifth day after the World Series.

Next up on the calendar is November 19. This is the date by which teams will have to set what are officially known as “reserve lists”. In plain English, they need to add any prospects eligible for the Rule 5 draft to their 40-man roster by this date to prevent them from being exposed and potentially selected by other organizations.

A quick primer: The vast majority of Rule 5-eligible prospects will pass through the Rule 5 draft without drawing interest, and a significant number of players taken in the Rule 5 draft won’t stick on their new team’s active roster all season. Under the current rules, a Rule 5 player being removed from an active roster is designated for assignment and placed on waivers. If he clears waivers, he has to be offered back to the team from which he was taken in the Rule 5 draft. (That was what happened with Miami Marlins pitcher Sterling Sharp, who was taken from the Nats in the Rule 5 draft in December 2019 but returned to the Nats after he was DFA’d in August 2020.) If a team does claim a DFA’d Rule 5 player off waivers, the same obligation transfers to that team, requiring them to keep him on their active roster for the remainder of that season or else DFA him and offer him back to his originating team if he clears waivers.

The Nats have a whole mess of minor leaguers who are eligible to be selected in the Rule 5 draft. But to narrow down the candidates, we ought to look at their delegation to the Arizona Fall League, which is often considered a showcase and high-level evaluation for potential Rule 5 draft picks. There are eight Nats minor leaguers currently “on loan” to the Surprise Saguaros:

Continuing to follow the math, the Nats project to have 37 players on their roster at this point. If they so choose, that would give them just enough roster space to protect all three of their Rule 5-eligible players currently playing in the Arizona Fall League, including Casey and Pineda, who passed through last year’s Rule 5 draft without being selected.

The Nats will have more decisions to make by December 2. This is the deadline for teams to tender 2022 contracts to players. Realistically, this deadline only matters for players who are eligible for arbitration, for two main reasons. First, players who are “pre-arb” can usually be designated for assignment and outrighted to the minors at will (unless they have been outrighted before, in which case they can reject outright assignment and elect free agency). Second, teams can simply dictate a one-year salary to players who aren’t arbitration-eligible, usually at or slightly above the major league minimum. That means it’s a formality in most cases for teams to tender contracts to pre-arb players.

The Nationals project to have up to ten players who are eligible to have their 2022 salary determined via arbitration:

To further explain: Bell and Ross can be tendered 2022 contracts, but they will be eligible for free agency after the 2022 season. In some cases, entering the final year of arbitration eligibility makes it likelier that a team will seek to work out a multi-year deal with a player they wish to keep under contract. In others, it makes it likelier a team will not tender a new contract, because that only means giving up one year of team control as opposed to future years.

As for the Super Two case: Under the current rules, players become arbitration-eligible under two circumstances. The most common is that they reach three years of major league service time, which is also the point at which they gain the right to reject outright assignment and elect free agency. The other is when they have two years plus nearly a full year of service time accrued. Rather than being a set number of days, the Super Two “cutoff” is calculated after every season.

Fedde, Harper, Stevenson, Suero, and Voth could be on the chopping block after rough 2021 campaigns for each player. Ross could also be non-tendered if the Nats aren’t confident he will be a healthy contributor in 2022. The Nats will make their own decisions on a player-by-player basis.

The Rule 5 draft itself is scheduled for December 8. Under the rules of the draft, only teams with space on their 40-man roster are permitted to make a selection. The Nats have not taken a player in the Rule 5 draft since 2010, when they took pitchers Elvin Ramírez from the New York Mets and Brian Broderick from the St. Louis Cardinals. Ramírez never played a game for the Nats and was returned to the Mets after the 2011 season. Broderick appeared in a few games for the Nats but was returned to the Cardinals in May 2011. (He later returned to the Nats organization as a minor league free agent, topping out at Double-A.)

While it would surprise no one to see Rizzo once again pass on the Rule 5 draft, there’s a chance this offseason could be different. The Rule 5 draft is typically used by rebuilding teams who can afford to take a flier on a prospect or two who might not be MLB-ready but could be a long-term asset. Of course, Rizzo doesn’t like the word rebuilding…

The elephant in the room

Beyond all of these dates for potential Nats activity, the big date is December 1, when the current collective bargaining agreement between MLB and the MLB Players Association expires. This time a year ago, many pundits were confidently predicting a lockout or work stoppage would be inevitable after the 2021 season. But whether because of the ongoing playoffs or otherwise, much of that chatter has died down.

MLB and the union are known to have exchanged proposals on a few key points during the season. Still, it’s unclear whether a deal can actually come together by the start of December. J.J. Cooper of Baseball America wrote today that even if there isn’t an agreement in place, minor league activity and the Rule 5 draft will likely continue more or less as normal.