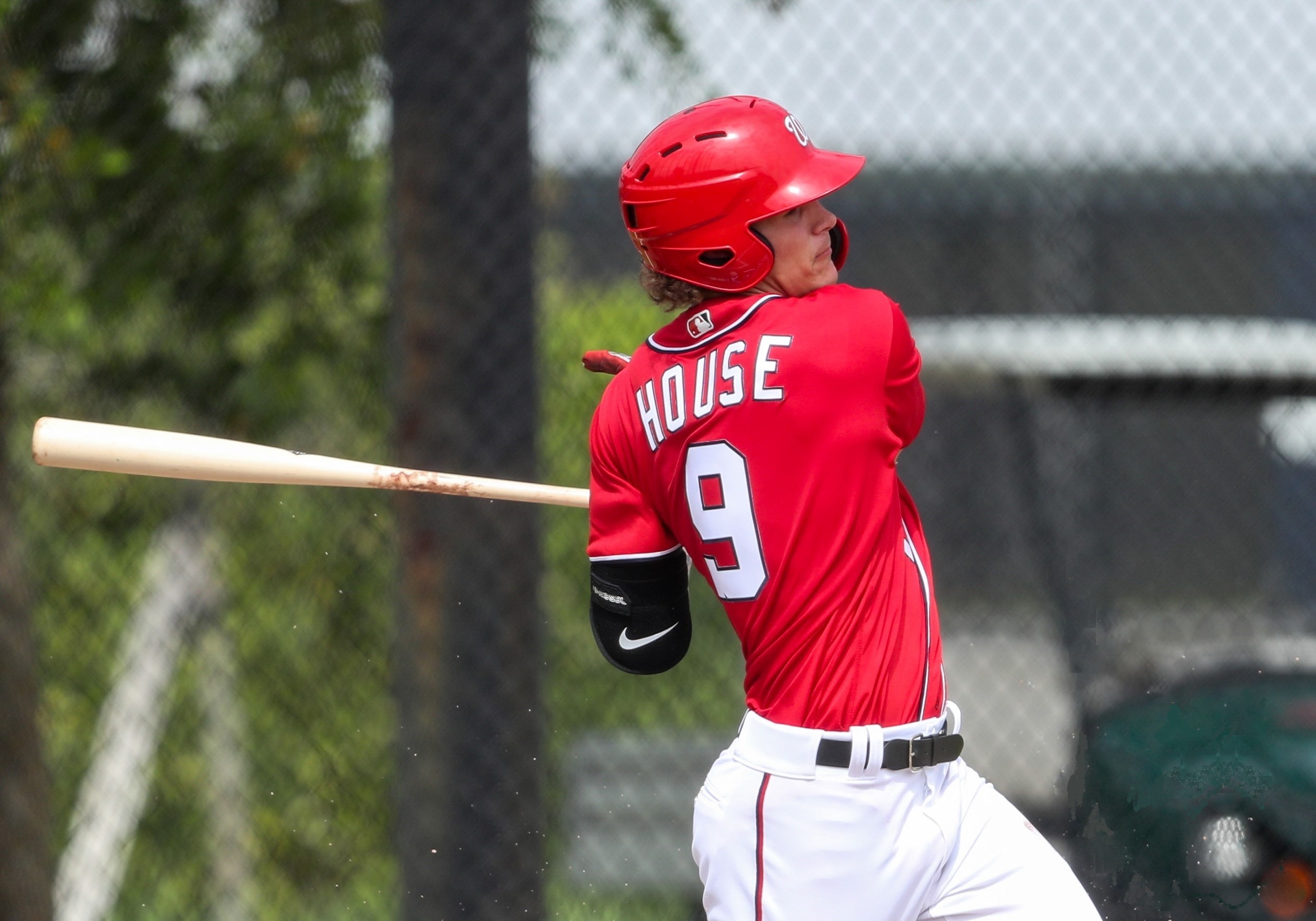 Photo by Tom DiPace for TalkNats

For three weeks, the Washington Nationals first round pick in this year’s draft had to get acclimated to baseball as a Nats farmhand at the team’s training facility at the Ballpark of the Palm Beaches in West Palm Beach Florida.

The plan was to ease Brady House into pro ball with a debut into the Florida Complex League this week. He has made quite the debut in his first two games on Monday and Tuesday. He started at shortstop and stroked two singles in three at-bats on Monday in his pro debut game then on Tuesday went 2-3 again plus a walk and one of those hits was a grand slam home run off of a pitcher who is 5 years older. He hit the slam off a pitcher named Cleveland, and it must have felt like he hit the baseball to Cleveland! Not too shabby for a young 18 year old teenager to make his presence felt like that.

The FCL has plenty of teens, but also some recent college graduates, and players on rehab like House’s teammate, Cole Henry, who threw three shutout rehab innings yesterday on his way back from an arm injury.

Just by signing House as the  № 11 overall pick, the Nats upgraded their farm system greatly as Baseball America immediately ranked him among the Top-100 prospects in all of baseball.

House signed days before the deadline for a $5 million bonus which was over slot and sources had told us the young phenom needed at least $5,xxx,xxx to forego his college commitment to the University of Tennessee.  The top prospect is repped by WME (William Morris Endeavor) and they just got into baseball a few years ago. For those who don’t know, WME is a behemoth in the agency biz in all aspects of Hollywood. House is their top prospect too.

The Nats were able to make it happen in signing House, but it also cost them in overall pool money because the team didn’t have enough to ink Mack Anglin in the end and he will return to Clemson instead.

A day after signing his deal, House was in the house at Nats Park to take in a game just a day after the Nats had their biggest sell-off ever at a trade deadline. It had to be bittersweet in a way. House said he had always liked Trea Turner, and in an instant, Turner was gone. But House could be the next greatest shortstop or infielder in Nats history. Time will tell. 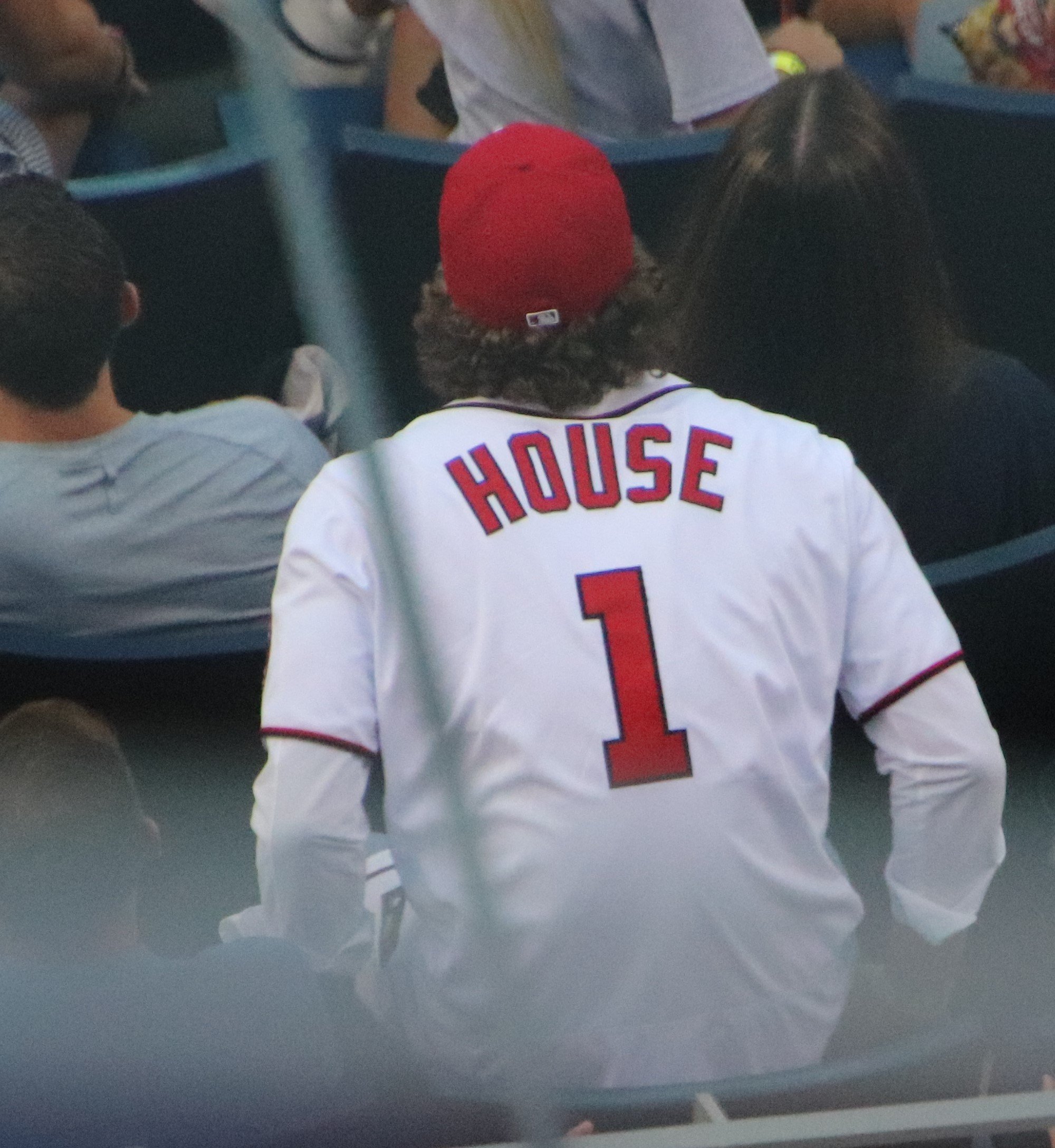 It was not House’s first game attended at Nats Park. It certainly won’t be his last. It will take years of hard work to get there and stay there on the field.

“I think I was 12 or 13, it was whenever my travel ball team was traveling up north,” House said. “We went to a Nationals game. I was with my mom, my brother, me and my grandma, and I just remember the atmosphere being electric and that’s what I’m looking forward to going into this is just the atmosphere and the fans and playing with hopefully a bunch of those top elite prospects.”

The 18-year-old said the Nats were “where I’m meant to be” after getting to know several of the team’s scouts who followed him through his high school years, Team USA and showcases. The 6-foot-4, 215-pound high-schooler was ranked the No. 8 prospect by MLB.com, and Baseball America analyst Carlos Callazo said on ESPN that “you could make a case that [House] has the best offensive upside in the class.” Here are more highlights from other draft evaluators on House.

He said that he’s been called a “Ryan Zimmerman-type” player which you might remember Zim was a shortstop at that age and moved to third base in college at Virginia. He should find that comparison as a compliment especially since House was drafted by the Nats.

“People are already kind of describing me like a Ryan Zimmerman type,” said House, “So I got to live up to that, for sure.”

On the same day, Zimmerman and House hit big home runs in the state of Florida. He might not be the most well-known Brady who this franchise has ever drafted, but he could be the best ever and his pro game has started in grand fashion.

He’s the No. 60 prospect in baseball according to @MLBPipeline.

He crushed a grand slam in his 2nd professional game.@Brady_house7 // #NATITUDE pic.twitter.com/0SLulnJpAO