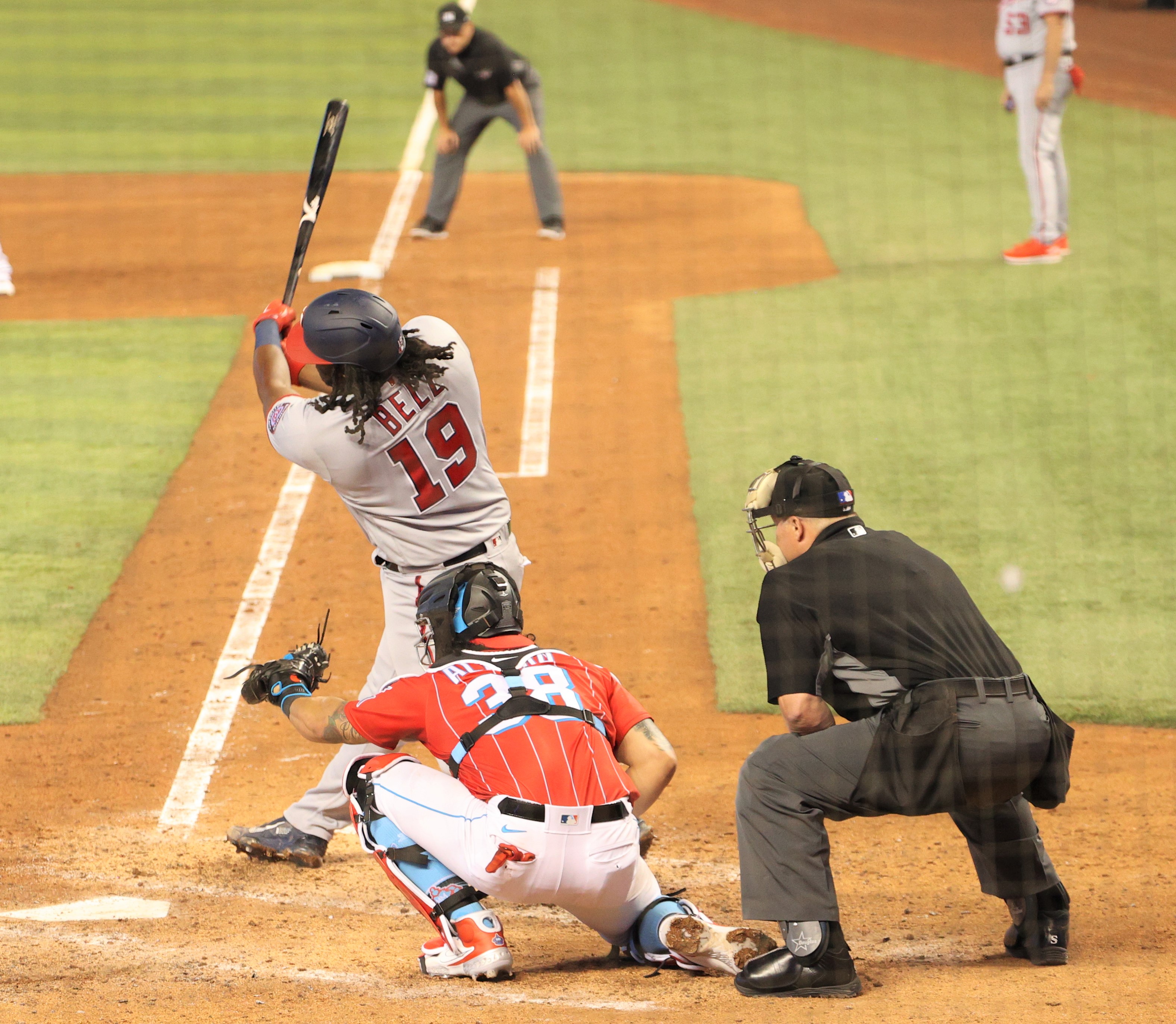 Following their walk off win on Sunday evening, the Nationals continue their homestand by welcoming the Miami Marlins to town. The Marlins, like the Nationals, have struggled to find consistency in the month of July. The teams are currently in fourth and fifth place, respectively, but are looking to make a push. Although the Nats won an exhilarating game against the Padres Sunday afternoon, it does not hide the fact that not only are they banged up, but they blew the game twice with their best relievers. Nonetheless, a win is a win, and that win was ever so desperately needed.

As the Nationals saw down in Miami, the Marlins are shifting towards a more youthful lineup. The majority of their pitching staff is very young. Trevor Rodgers, their rookie sensation on the mound, and Jazz Chisholm Jr. exemplify this renaissance. Between them and left fielder Jesus Sanchez, yet another rookie, the Marlins have begun to audition some of their top talent. Players like JJ Bleday and Max Meyer, two of their top prospects, are both expected to see some action later in the season. The Marlins have a rich, deep farm system that has them set up very well in the coming years.

As good as their farm system is, their current team is no slouch. Jesus Aguilar and Adam Duvall are two very potent bats in the middle of their lineup. There has been a lot of buzz with those sluggers about whether or not they will go to a contender at the trade deadline. Nonetheless, they are both still hitting and bolstering their respective cases in their upcoming free agencies. The biggest thing that will be noticeable for the Marlins this week will be who is playing for them. Rather, it will be who is not playing for them. The team is injured to a similar degree as the Nationals in prior weeks. Chisholm went down yesterday. Many of their better pitchers have met a similar fate. It is safe to say that the Marlins are far from full strength.

As far as their pitching is concerned, Rodgers leads the group, but Sandy Alcantara and Pablo Lopez are two more quality arms. In addition, Zach Thompson has been terrific since making his MLB debut. The Nats saw first hand what he is capable of on June 26 when he threw six innings of one run ball with 11 strikeouts as well. In addition, the Marlins have some interesting arms in their bullpen. By no means are they established pitchers in the league, but Anthony Bender has been solid for them in the bullpen. Additionally, Dylan Floro and Yimi Garcia are both worthy of mention due to their seasons so far. Although his numbers are not quite there, Zach Pop has been a great strikeout pitcher for the Fish since his debut. In 33 innings pitched, he has averaged exactly one punchout per inning.

For anyone watching baseball this past week, or the news in general, it is no secret that the Nationals have been at the center of one of the most unique situations of the season. It is not due to anything they did, but it is due to something that happened at Nats Park. The shooting outside of the 3rd base gate that saw three injured was a tragedy. The Nats, though, said all the right things in the aftermath. Davey Martinez gave a resounding speech on how the fans are like the Nationals’ family. For all the things one can say about the franchise, they have certainly handled this unique situation very well. The entire situation stretches farther than just baseball, though. The Nationals have done a great job in cleaning up the area surrounding Nats Park. They have built the high rise buildings that are a staple of a downtown ballpark. Additionally, the Navy Yard area has really seen a facelift in the time since Nats Park opened, and the Nationals deserve credit for the work they have done in this community.

The on field play, though, has not looked quite as pristine as the Nationals brass would have hoped. Juan Soto is as hot as he has ever been this season. In the time since the Home Run Derby, he has been smacking the ball to all fields. Sunday, he went 3-4 with a double, single, and home run all hit to left field. That is a tremendous sign for the team and fan base alike. When he is hitting the ball with authority to the opposite field, there is very little opposing pitchers can do to stop him.

Supplementing his potent bat, Trea Turner has been doing more Trea Turner things. He has been flying around the bases with regularity. Then there is one of the biggest surprises of the last month: Alcides Escobar. He punctuated a great game yesterday with some late inning magic. He hit a solo home run, his first as a Nat, to bring the Nats within a run. Then in the ninth, he whacked a walkoff hit to right centerfield to give the Nationals a Curly W. On the other side of the ball, the bullpen has shown cracks in recent weeks, but Max Scherzer has not shown a single one. He has been superb this year and is keeping the pitching staff afloat at the moment.

The Nationals desperately need to start collecting some wins in the next few weeks before the Trade Deadline. Their upcoming schedule sees the level of competition regress dramatically after they recently played the elites in the league. Following the series against the Marlins, the Nats face the Orioles, Phillies, and Cubs in their next few series. They are all professionals, so there is no reason to take them lightly, but they are clearly nowhere near as talented as the Padres and Dodgers. That means the Nats must take advantage of  the opportunity to rough up some scuffling clubs. As always, there is no better time than the present to start winning some ball games.