The Nats walk-off by Alcides Escobar in a wild winner! 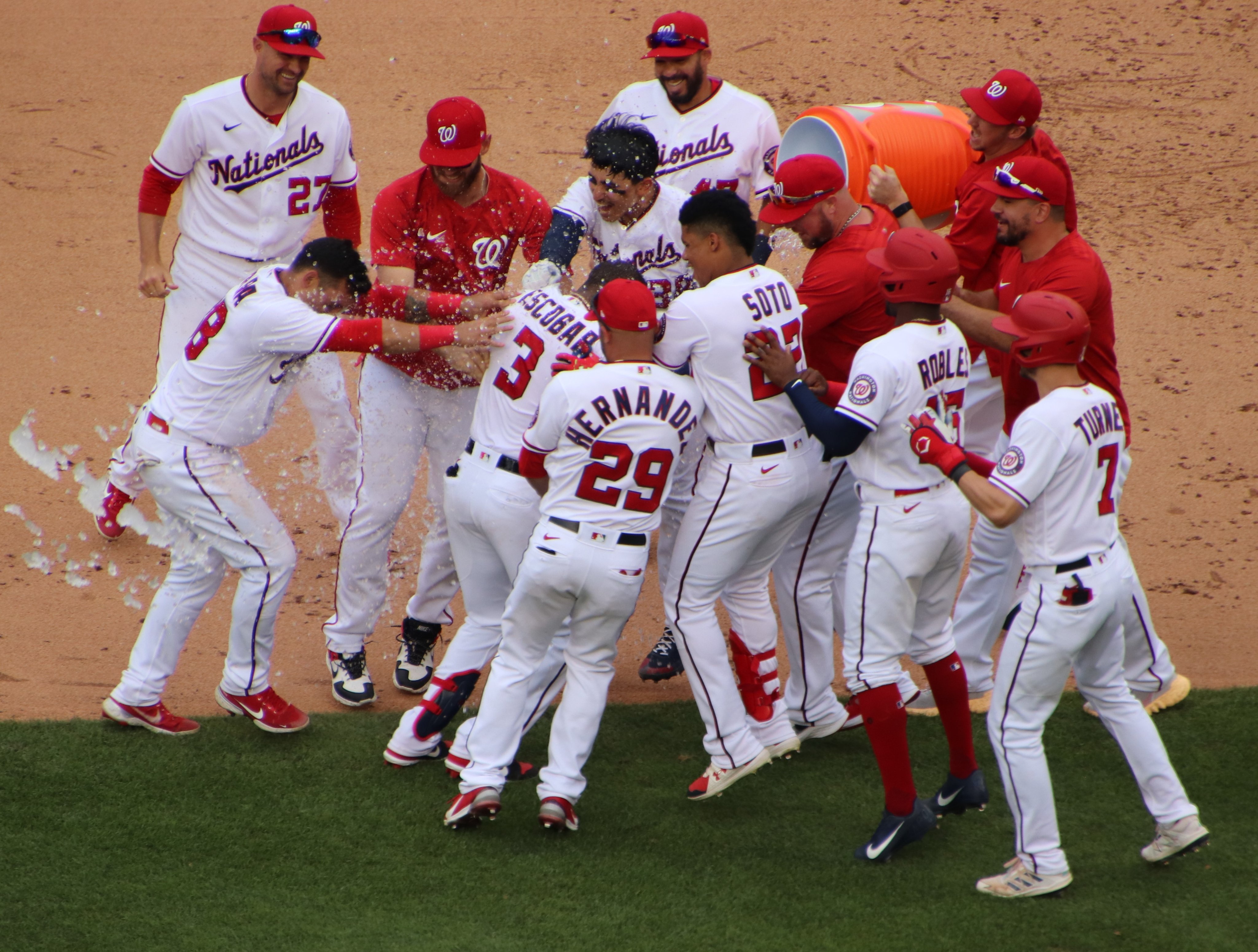 Pick your hero today from Alcides Escobar who hit the game winning hit in the 9th inning or Juan Soto who hit what should have been the game-winning two-run home run in the 8th inning. After a traumatic night with gun violence outside Nationals Park, the team reminded us that they have not given up even though the team was mired in a 6-game losing streak which was just erased by Escobar who picked up Brad Hand who got collared with the blown save.

“Especially to be able to give the fans that great win today after having that unfortunate incident yesterday, where most of us felt a little bit of a moment of fear of what happened,” Escobar said via interpreter Octavio Martinez. “Luckily everything worked out and we were able to win today’s game.”

It was the Nats very first win in 37 games this season to comeback from at least a 2-run deficit after the 7th inning and win the game. Now 1-36 in those games.

You can’t forget recent call-up Tres Barrera who scored the winning run in a game that he went 2-4 with a walk. You also can’t forget the 4-runs the Nats scored to take a lead in this game with great baserunning by Trea Turner, Josh Harrison and Andrew Stevenson who all used their speed to score on close plays. 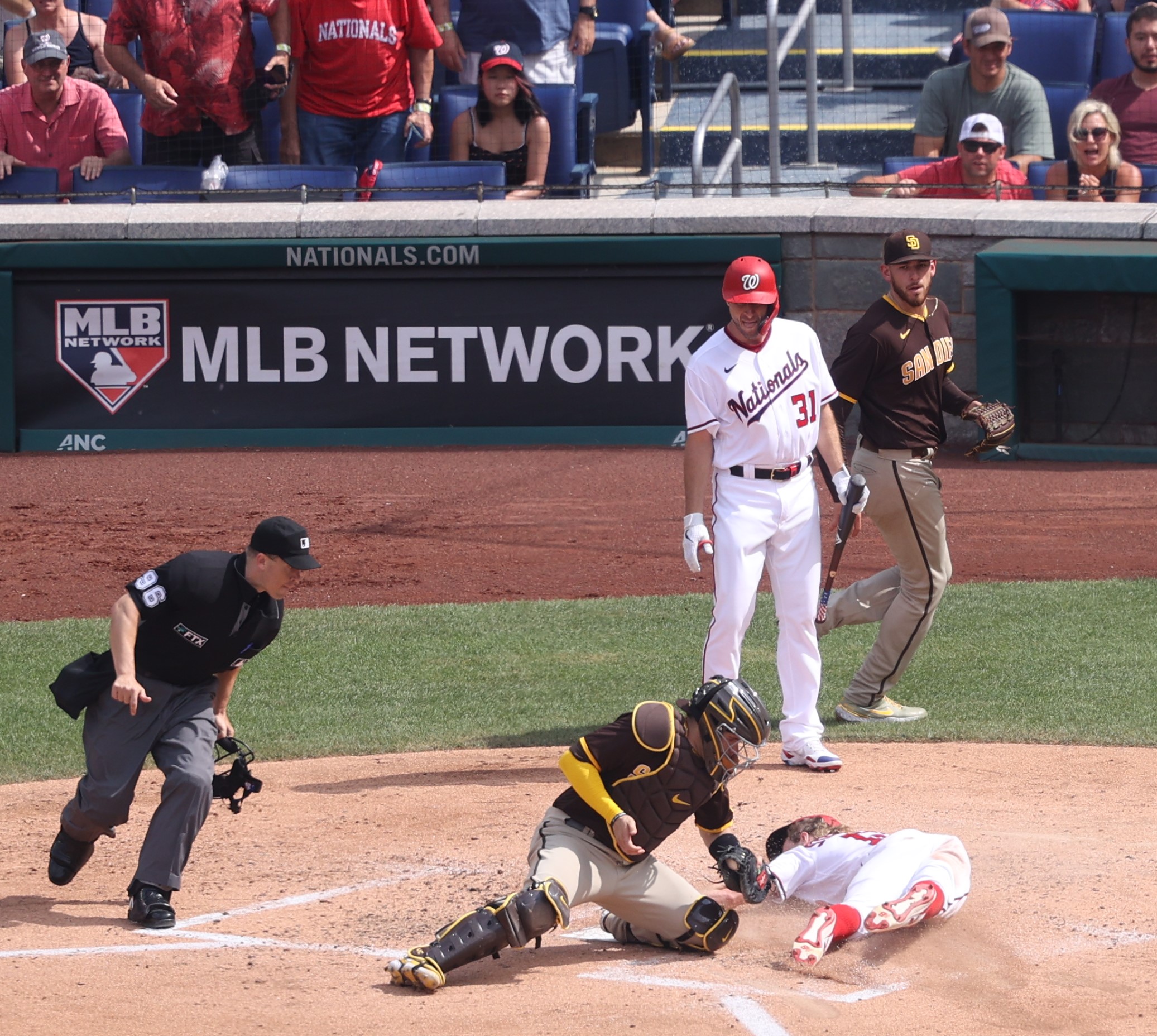 Stevenson scores with the plate blocked; Photo by Sol Tucker for TalkNats

Unfortunately starter Max Scherzer blew the four run lead and exited at the end of 7 innings in a 4-4 tie. The Nats bullpen was not good but Daniel Hudson was victimized by an error that threw him off of his game. The score went to the favor of the Padres by a score of 6-4. The Nats answered with an Escobar home run, a Turner double, and a Soto 2-run homer to take a 7-6 lead, but Hand gave up a walk that eventually scored on a bloop single to make the score 7-7. In the 9th inning, it took a Barrera single, Victor Robles HBP, and the Escobar long walk-off single.

“We all traded blows there. Fortunately we hit last and get that run that counts and the lead. Always exciting on a walk-off. Alcides is playing excellent baseball for us,” Scherzer said.

In a scary part of the game, Turner was beaned behind his left ear squarely with a 93 mph fastball. Turner somehow stayed in the game and as usual made his impact felt.

For Soto, he has now hit 3 home runs in his three games since the HR Derby. His oppo taco home run was a great sign for the star outfielder. He now has 14 home runs for the season.

“I think it means more to myself and the players knowing that the fans came back after yesterday,” manager Dave Martinez said. “The [fans] came to support us, and it was huge. Our players, they feed off of that. It was a good day, for all Nats fans and for the Nationals.”

Credit to general manager Mike Rizzo for finding Escobar. He has been a difference maker for this team. He really isn’t known for his offense, but he really came through today. He saw Padres centerfielder Trent Grisham cheating in on him and he just hit a liner over his head for the walk-off hit.