Nats win a key game to start this road trip with 7 runs! 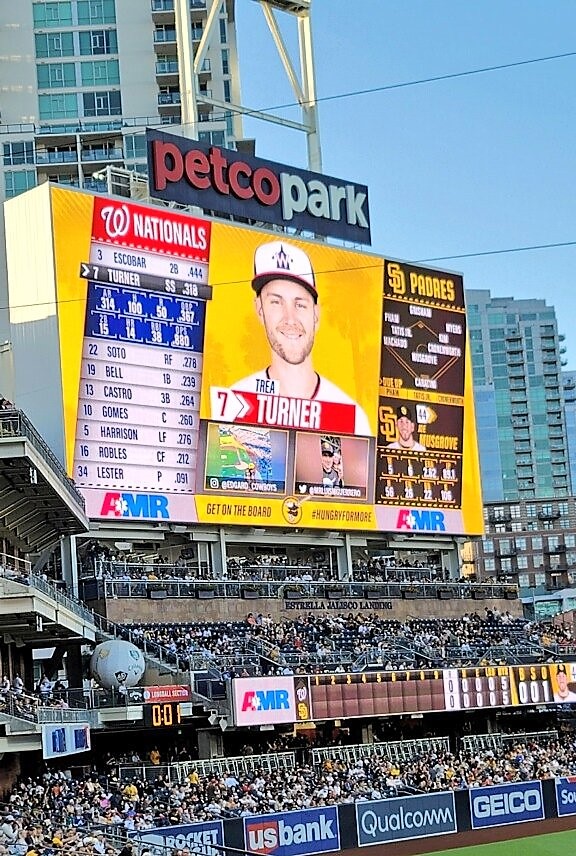 Turner started the scoring with a HR above the AMR sign; Photo by Steve Mears for TalkNats

Contact hitting is a lost art, and Alcides Escobar showed that he has learned a few tricks in his time away from the MLB game. He went 3-4 with a key safety squeeze and 2 RBIs in this one to raise his batting average to .583 on his 7 hits this week in 12 at-bats. The game started off with a 410 foot upper deck home run from Trea Turner who returned to the lineup for the first time since Wednesday. It was Josh Bell with the game winning run via a 412 foot home run, and some of the other big contributors were Victor Robles and everyone in the bullpen.

Unfortunately starter Jon Lester only lasted 3 1/3 innings and the bullpen had to cover 5 2/3 innings for him. All five runs (2 earned) ended up on Lester’s ledger tonight. But it was another very short start as he is averaging almost 4 1/2 innings per start.

Only Kyle McGowin had any trouble tonight, from the bullpen relievers, allowing an inherited runner to score on Lester’s final line. The rest of the bullpen was nails going from Wander Suero to Sam Clay to Austin Voth to closer Brad Hand . Those four relievers threw FOUR perfect innings. Hand earned his 19th save of the season to shut the door with a final score of 7-5. The matchups from Suero forward were crafted well by the Nats’ manager.

“The bullpen did a great job,” manager Dave Martinez said. “They kept us in the ballgame. They all chipped in.”

Lester was given a 5 run lead and with 2 outs in the third inning an error happened by Starlin Castro. It was a slight bobble and the runner was called out and reversed on review. Then Lester melted down and gave up 3 unearned runs and then gave up a long home run to Fernando Tatis and exited with a runner on second base that McGowin allowed to score to tie the game at 5-5. The fifth and sixth innings became a pitcher’s duel in the bullpens until Bell homered to break the tie, and then Escobar, the new guy, hit a long ground-rule double for the added insurance run to get the Nats to 7 runs.

The Nats will skip Patrick Corbin tomorrow, and Martinez said he will pitch on Wednesday. But we don’t know the reasoning for pushing him back, and that will leave a void in who will pitch tomorrow. It could be a bullpen game with Jefry Rodriguez or an opener, or the team could bring up a spot starter.