Who will be the emergency infielder? 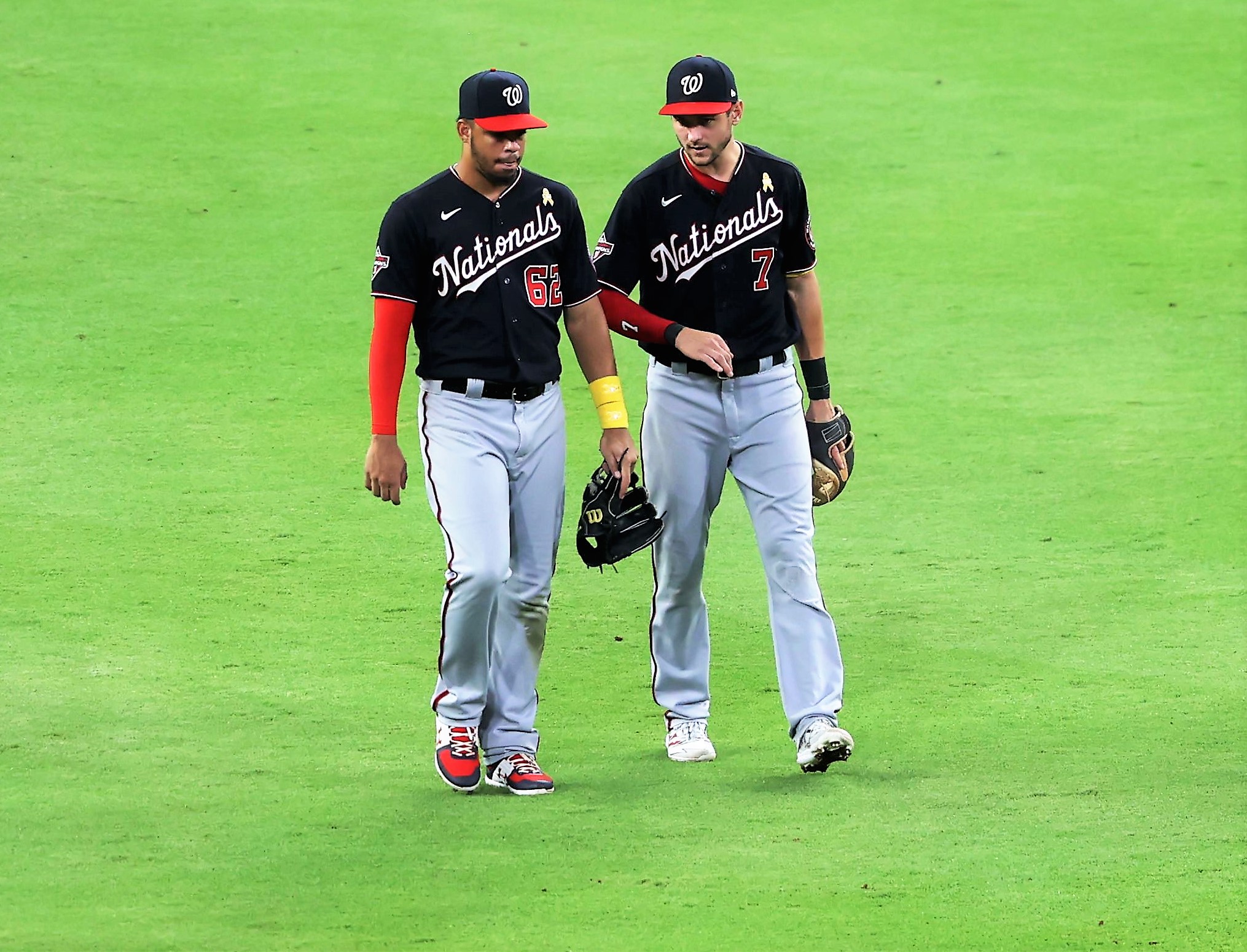 Trea Turner has emerged as a leader and a mentor as he was seen discussing strategy with the young Luis Garcia; Photo by Sol Tucker for TalkNats

The Nationals need an emergency middle-infielder, and they need one soon. Usually the protocol for having both of your shortstops injured would be to call up someone from the minors, unfortunately for the Nats, their two most MLB ready call ups in Luis Garcia and Carter Kieboom are both injured. Long-time utilityman Adrian Sanchez is also hurt. Even dipping into Double-A ball yields an injured Jackson Cluff. Every middle infielder in the Nationals’ minor league system is hurt and/or not on the 40-Man roster. Of the healthy candidates not on the 40-man, nearly all of them are too young and inexperienced to make any significant impact at the Major-League level. Thus the solution for last night’s rain-shortened affair was to simply wing it, and trust in veteran catcher Alex Avila’s experience to guide him through his first appearance in the middle of the infield.

But the Nationals may need a replacement for Trea Turner while he recovers from a swollen middle finger. So here’s a few options…… some more creative than others:

Before we get ahead of ourselves with wild speculation, I have to remind everyone that Jordy Mercer was only sidelined from last night’s game for a continuous cramp. There’s a good chance Mercer is ready to play in the very near future, possibly even today. While a boring ending to the crazy series of lineup moves that occurred over the last 24 hours, it’s the most beneficial move for the Nats. They won’t have to delay Turner or Mercer’s return further by moving them to the Injured List, and they won’t have to DFA anyone on their current 40-man roster to add a replacement. So while I’d love to see some shenanigans at Second Base, let’s all hope for Jordy Mercer’s quick return.

If Mercer’s cramp is prolonged, or god-forbid is another injury entirely, then the most likely outcome is that he is put on the IL-10, with Yadiel Hernandez or another player being Designated for Assignment or some 60-day IL move, so the contract of Jake Noll can be purchased. Noll has played 21 games at second base this season, including his last 3 starts. If the minor leagues were not a rotating chair of positions with every position but those occupied by your top prospects being filled by a committee. He would surely be considered Rochester’s starting 2nd Baseman. Noll also has experience at 1B,3B, and LF, bringing versatility to an already short bench. Noll has slashed .298/.337/.482 in his time in Rochester so far, he’s surely a better fit at the position than Avila, if Turner or Mercer cannot return to the diamond urgently, then the Nationals should waste no time giving Noll the call.

If this season has proved anything at all, it’s that team morale matters a whole lot more than any metric could prove. The team has been on an absolute tear since the return of Gerardo Parra, against some pretty tough teams too. If the clubhouse is feeling a bit blue about the skeleton crew it appears to be running with, then Rizzo should call up some meat to cover the bones, and who better than the man they call the truck? I am, of course, talking about Howie Kendrick. The man obviously needs no preamble, Howie is a Nationals legend. He hits bombs, and just happens to play second base. The mere mention of his name sends Dodger fans into flashbacks of Game 5 of the NLDS. His addition, even for a 10 day stint, would undoubtedly be a boost to the clubhouse. And with the weird 2020 season, the fans never got to say a proper thank you to Howie for his Postseason heroics. If I’m Mike Rizzo, I have to at least give Howie a call. You never know, the Truck might just have a bit left in the tank…