Next Three Up: Nats Welcome Mets and Rays to DC 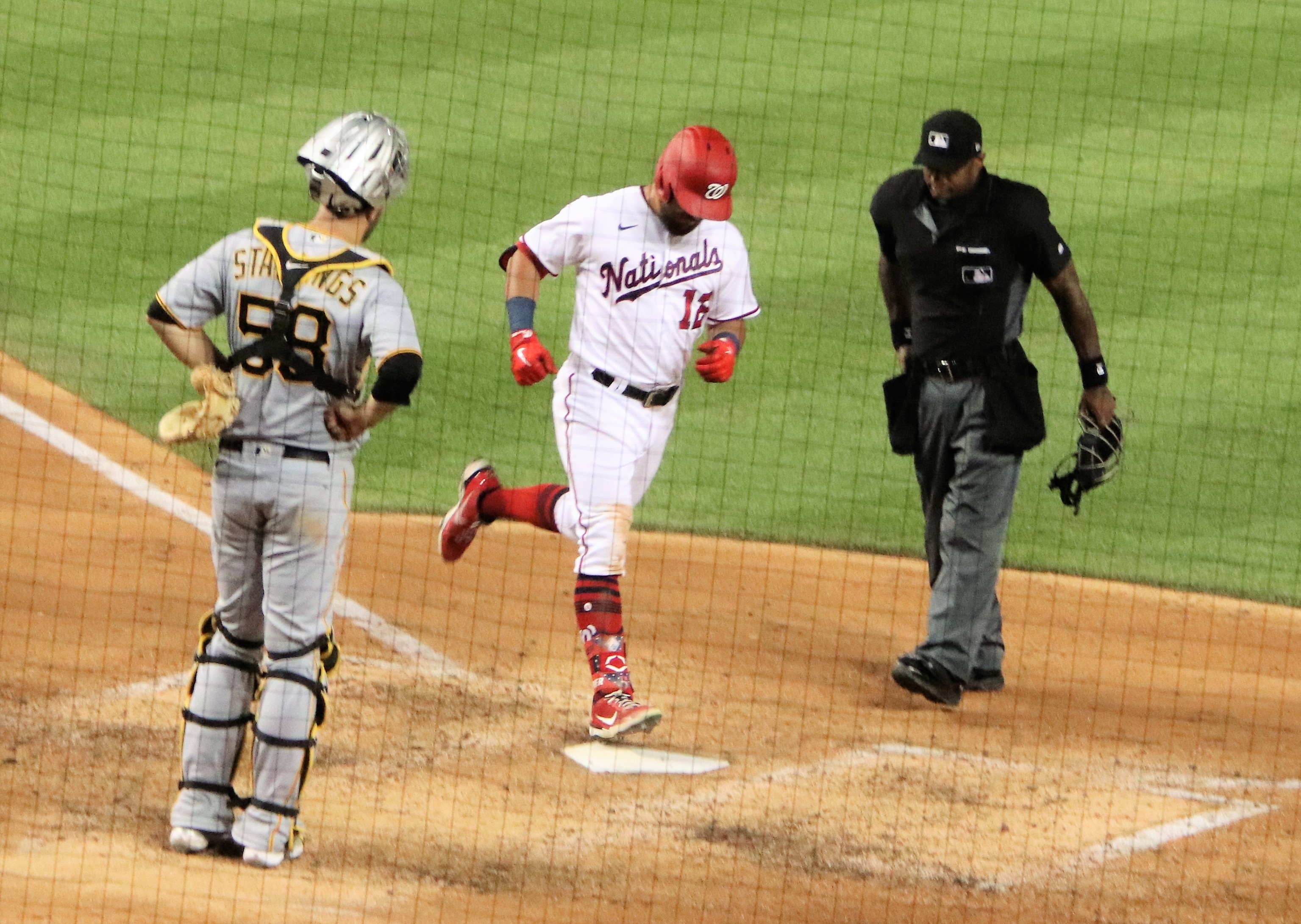 After a split in Miami in that four-game series, the Washington Nationals return home to face a rough schedule prior to the All Star Break. That all starts with a quick one game visit from the Mets to make-up a game from the Opening Day series. That April series was canceled due to Covid-19 positive tests in the Nationals clubhouse. On Tuesday, the Tampa Bay Rays come to Nats Park to conclude their season series with another short series that will last a mere two games.

After departing from Washington just about a week ago, the Mets find themselves right back in the Nation’s Capital. The Nationals have had a tumultuous week that saw them extend their winning streak to five games, then drop two to the Marlins before winning Sunday. However, the Mets have not been able to experience the same highs that the Nats have in the past few games. The Mets have been stagnant in recent games and have been surprisingly mediocre for a team that leads their division and employs the best pitcher in baseball.

Including the doubleheader that the Nats and Mets played on June 19, the Mets have had three doubleheaders in the past seven days. Much of that is due to the massive amounts of postponements early in the season. Their pitching staff is not only stretched as thin as possible, but incredibly banged up. Their transaction log reads in the same manner as a poem by Edgar Allen Poe, one that describes the deep cuts and bruises that one endures on a day-to-day basis. After leaving DC, they have lost Jeurys Familia, Robert Gsellman, Tomas Nido, Joey Lucchesi, and Jonathan Villar to the IL. The Mets have, however, activated both Jeff McNeil and Michael Conforto. Those two are huge pieces for their offense, and both swing lefty bats. Nonetheless, to say that the Mets are hurting for pitching might be the biggest hyperbole in a while.

A lot has changed in Tampa since the Nationals left a little more than two weeks ago. Tyler Glasnow, who dazzled against the Nationals, is gone for the majority of the season. He had been pitching with a serious arm injury and is now shelved for the season. The biggest move has been the call-up of Wander Franco, the number one overall prospect. Franco boasts all the tools to be a superstar in this league. Strangely enough, he has gotten off to a slow start after a home run in his MLB debut. He is currently hitting .136 entering the series, but the consensus is that he will turn it around in quick fashion, and hopefully he figures it out after he leaves Washington, D.C. on Wednesday evening.

The Rays have actually struggled a bit since the Nationals visited them earlier in the month. A week after Nats departed, the Rays lost six straight games. They have turned things around over the past few games against the Angels. Still, the Rays are playing at a lower level than they are accustomed to as an organization. No matter what, they are a team that can give anyone fits. Their pitching and defense are unrivaled and winning one game against them felt like such a tall task for the Nationals. In their second game in St. Petersburg, the Nationals led the entire way until the Rays made multiple comebacks. Ultimately, the Nats won the game, but that single win felt like the teams had played a total of seven games instead of just two.

Everyone knew that the Nats would make their push towards the top of the division. There is simply too much talent on the roster for the team to not play up to their potential. The question was always just when they would make their ascent. The Nationals are entering these games against the Mets and Rays in 2nd place in the NL East. However, with the Dodgers immediately following the Mets and Rays on this homestand, the Nationals need to continue to find ways to win.

As far as individual performances Juan Soto continued his excellence on the road this season. It is now time for him to deliver with the home crowd behind him. Josh Bell hit two massive home runs on the road swing, both emotionally and physically. Max Scherzer came off the IL and picked up two victories for the club. Then there is Kyle Schwarber. There is no need to rattle off all the records and milestones he has surpassed. He has definitely made his mark on the Nationals lately. The team has been so frustrating because of the way that they have played according to their competition. They have been able to trade punches with the league’s elite like the Giants, Rays, and Yankees. However, they have failed to capitalize against the Diamondbacks, Orioles, and Blue Jays.

Potentially that bodes well for them. They will embark on a stretch where they exclusively play against the elite teams in this league. All that being said, it is not a good thing for the Nats to anticipate the All Star Break with this type of schedule. Many teams will just try their best to make it to the break without any major injuries and consider it a success. The Nationals are given the opportunity to prove to themselves, the fans, and management that this group is capable of making a legitimate postseason push. Beating the teams ahead of them is the only way for them to ensure that they will move up in the standings.

There is not a lot of history between the Nats and Eickhoff, but who expected Alex Avila to have the most production against him? 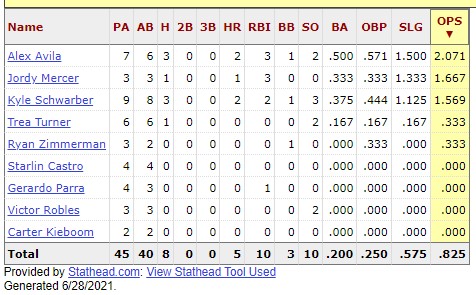 We know the Nats had some great postseason battles against the 41-year-old lefty Hill. Most of the current Nats have very little history against him. 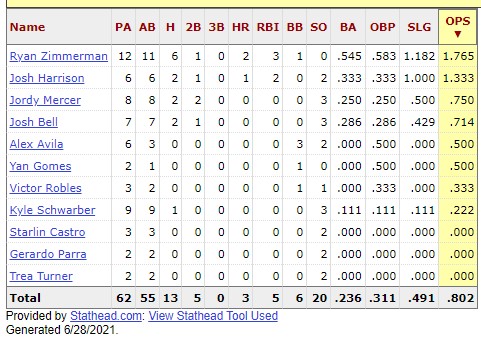 These Nats have faced Wacha when he was with the Cardinals and the Mets. 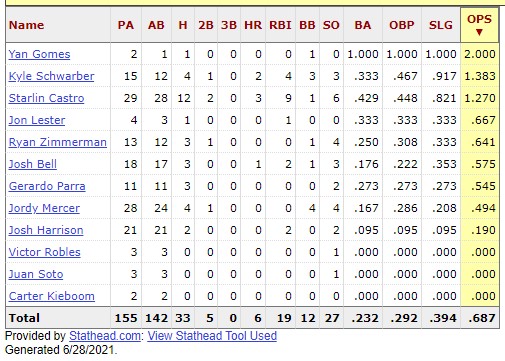