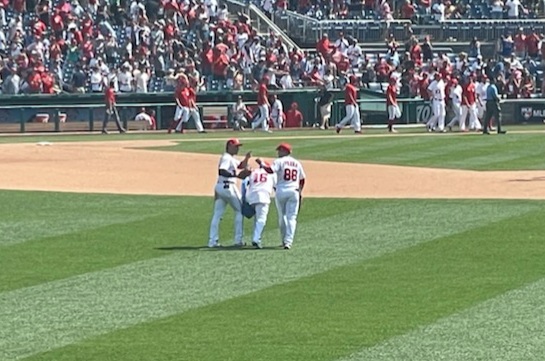 The Washington Nationals have now inserted themselves as legitimate contenders in the NL East by taking down the first place Mets in 3 of 4 games this weekend. While the Nats are 5.0 games behind the Mets after this Nats’ win, this lead is surmountable, and the Nats have 93 games remaining in the season to chip away at that lead.

This game opened with another Kyle Schwarber leadoff homer, and he finished the game with 3 to seal this win. The home team got to the Mets starter Taijuan Walker who had an ERA of 1.00 in 3 day games, and the Nats put the hurting on Walker. His ERA entering the game was 2.12, and he exited with a 2.42 ERA.

“I’m a big believer in that hitting is a feeling,” Schwarber said. “Don’t get me wrong — there’s mechanics. There’s approach, things like that, but when you step in the box and everything feels right, you’ve already got a big advantage. It’s just a matter of trusting everything else, and that’s what I’ve been doing.”

The offseason work that hitting coach Kevin Long did with Schwarber prior to Spring Training took a while to show the results, and if you remember Long’s work with Daniel Murphy back in his Mets’ years, it also took a while to come together. Schwarber put the bend back in his knees and now is getting the barrel on the ball.

“It’s been amazing to watch, fun to watch, and he’s lifted up his team tremendously,” Martinez said.

With Schwarber’s hot streak, it seem to have rewarmed Trea Turner again to where he found his power stroke, and Juan Soto is the next one who has to get the barrel below the ball to get that hard contact in the air. Today, Turner finally stole a base with Soto batting, and it was the perfect timing as Soto grounded out to the second baseman and instead of another tailor-made doubleplay, this time Turner got to third base and later scored on a Josh Bell single. We can say “finally” on that. Soto leads the team by a wide margin in doubleplays with 11 in only 59 games.

In the  top offensive categories, Turner leads in batting average, runs scored and stolen bases, Soto leads in OBP, and Schwarber leads in HRs, RBIs, and OPS by a few points over those two teammates.

On this Father’s Day game, it was also the return of Gerardo Parra to the roster, and he came through with a double in his first at-bat and the stadium of the largest crowd this year at 30,371 fans erupted. Baby Shark played before and after the double, and it felt like 2019 all over again.

The game was started by Patrick Corbin, and he settled down after a first inning home run until he hit the wall at 85 pitches in the 7th inning and gave up a lead-off home run followed by a walk, and was pulled in a 3-2 game with the tying run on first base. In came the other Kyle, Kyle Finnegan that is. He quickly induced a doubleplay of pinch-hitter Dom Smith and then another quick out for a great “hold” that really saved the game as the Nats in the bottom of the inning got their 3rd home run by Schwarber in the 2-run variety to put the Nats up 5-2, and Tanner Rainey and Brad Hand closed the game out.

For those who are scoreboard watching, the Mets and Braves have a doubleheader tomorrow and that could have an impact on the standings one way or another as there are three outcomes:

Expect the standings to look very different in the NL East next Sunday. Also, tomorrow begins the day the umpires start checking pitchers and catchers for foreign substances.