Jordan Zimmermann announces his retirement from baseball, and still one of the greatest Nats ever! 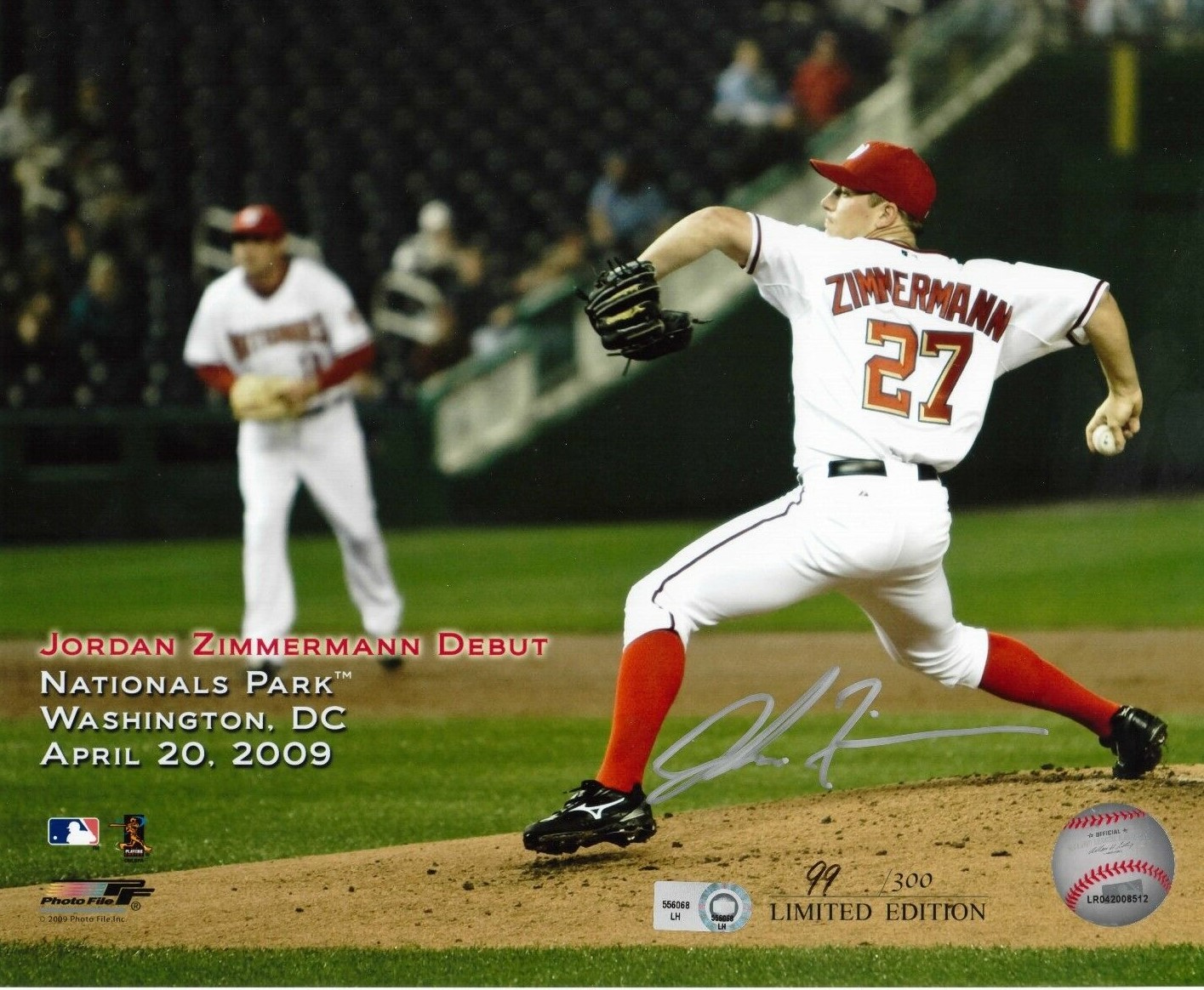 A photo I got licensed with MLB; Photographer Cathy Taylor

Back in the day, the Washington Nationals were not too popular at the time Jordan Zimmermann was to make his MLB debut on April 20, 2009. The team had just come off of a season when they lost 102 games, and this 2009 season might only be saved if they had a great season from Zimmermann, and even then they might only win 70 games.

It was a cold rainy night. The Capitals were in the Stanley Cup playoffs to compete with the Nats for fans on that evening, and first pitch was rain delayed to 9:15 pm that night. While the announced attendance was 12,473, there were only hundreds who stayed around for 1st pitch, and they all moved to the lower level. I was there to watch Jordan Zimmermann who I had signed to an exclusive deal to handle his memorabilia. The Nationals won 3-2 and JZim got his first win of the 70 he would have for the team that drafted him in 2007 with a comp pick when Alfonso Soriano went to the Cubs.

There was optimism that this kid from Auburndale, Wisconsin could be part of a Nationals rotation that was set that year in 2009 to draft Stephen Strasburg at No. 1. You could envision Strasburg, Zimmermann, John Lannan as a formidable 1-3 in a rotation. Weeks after Strasburg was drafted and made official, JZim injured his throwing elbow.

Before the news was broken, I spoke to Jordan, and he was obviously down at the time and told me he needed Tommy John surgery. A kid of not many words, and he said to me that I didn’t have to continue the memorabilia deal we had. He felt like he let me down, and I just told him we will move forward. He showed what type of person he was. He was a person of high integrity — someone who cared.

By the time Zimmermann rehabbed fully, he was already considered the sidekick to Strasburg who was already built up to be Cy Young before he ever threw a pitch in an MLB game. The 2011 season showed that JZim was going to be a big part of this Nationals rotation after an excellent season and a 3.18 ERA. He improved into 2012 even more with a 2.94 ERA, and was kind of lost in the shuffle as Gio Gonzalez was acquired and was named an All-Star with Cy consideration. That was the year of the controversial Strasburg shutdown as the Nats made their first ever postseason.

Some might remember Jordan Zimmermann coming out of the bullpen in Game 4 of the NLDS with an electric inning and a fist pump that had the crowd in a frenzy. Later in that game, Jayson Werth hit his iconic walk-off. Of course you all remember how the 2012 postseason ended against the Cardinals.

In 2014, JZim completed the season with a no-hitter in the game many people called “the catch” by Steven Souza Jr. That was just supposed to be the prequel to the postseason with high expectations for the first Nats’ postseason with a healthy Strasburg and Zimmermann who would go 1-2 in this NLDS with Doug Fister seeded as the No. 3 and Gio as the No. 4. For the Nats, it was one of the greatest postseason pitching performances as JZim was headed to a complete game 1-0 win with two outs when manager Matt Williams handed the ball to his closer Drew Storen who just needed to get Buster Posey out to seal the win. You know the ending of that game.

The following year, JZim’s final one in a Nats uniform, owner Ted Lerner shocked baseball by signing Max Scherzer to the richest deal ever for a right-handed pitcher. As Steve Mears wrote over the weekend, it was like a move from George Steinbrenner’s playbook to improve a strength. Bryce Harper infamously said, “Where’s my ring?” We all kind of thought it. Scherzer, Strasburg, JZim, Fister, and Gio. Maybe the best rotation ever? Unfortunately, not even close. Scherzer won the Cy Young and Harper won the MVP, but Stras dealt with injuries, and the bullpen failed over and over, and besides Harper and Yunel Escobar, the rest of the offense disappointed. That team did not make the postseason.

After that 2015 season, manager Matt Williams was not retained, Zimmermann left for free agency with Fister, and shortstop Ian Desmond. The roster was reconfigured, and the Jordan Zimmermann era ended with two postseason appearances, a no-hitter, an immaculate inning, and some great memories.

Unfortunately, Zimmermann’s career spiraled down after he signed with the Tigers and on this day he retired as a member of Wisconsin’s baseball team, the Milwaukee Brewers. Zimmermann’s career saw his best days in Washington with two All-Star appearances and two Top-1o Cy Young finishes. Certainly one of the greatest players to ever don a Nats’ uni. Also one of the finest people you will ever meet.