The Nats have won 30% of their games via the Walk-off! 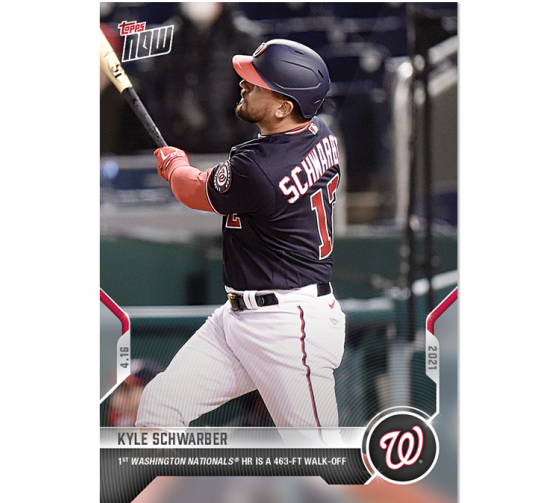 The Washington Nationals have won 30 percent of their games via the walk-off, and two of those (20%) on Kyle Schwarber walk-off monster home runs. The Nats leftfielder crushed that Rawlings baseball with an exit velocity of 115.4 mph on a cold and windy night when nothing before that came close to home run distance in this game. With a 2-1 final score that was at 0-0 in regulation, Schwarber did his thing in extra innings with his team trailing 1-0. The baseball they say traveled 454 feet which was 9 feet shorter than his walk-off homer exactly two weeks ago.

While Fangraphs pregame had Schwarber as the least valuable Nats player at a -0.5 WAR, he has singlehandedly won two of the team’s ten games in the final at-bat of a game. That has to be worth a lot of value.

“He’s just trying to make hard contact there,” manager Dave Martinez said. “If [Schwarber] gets the ball up in the air, the ball is going to go far.”

The game was started by Jon Lester who debuted for the Nats and went 5.0 strong with zero runs given up thanks to two stellar defensive plays behind him. Unfortunately, the Nats offense couldn’t make him a winner as the Nats hit into four doubleplays, and had chances with runners on 3rd and less than two outs in two situations and couldn’t score a run.

But better late than never with the heroics. In the new rules in extra innings that started last year, the teams get a runner on second base to start extra innings and the Marlins scored in the top of the 10th inning to draw first blood on a broken bat bloop single with two outs. The good news is that Schwarber turned Brad Hand into the winning pitcher.

In the Statcast era, Schwarber now owns two of the longest walk-off home runs. Here is the list:

If the Braves lose tonight, the Nats will be tied for second place in the NL East, and 1.0 game behind the Phillies for 1st Place. The key for the Washington Nationals is to keep winning.