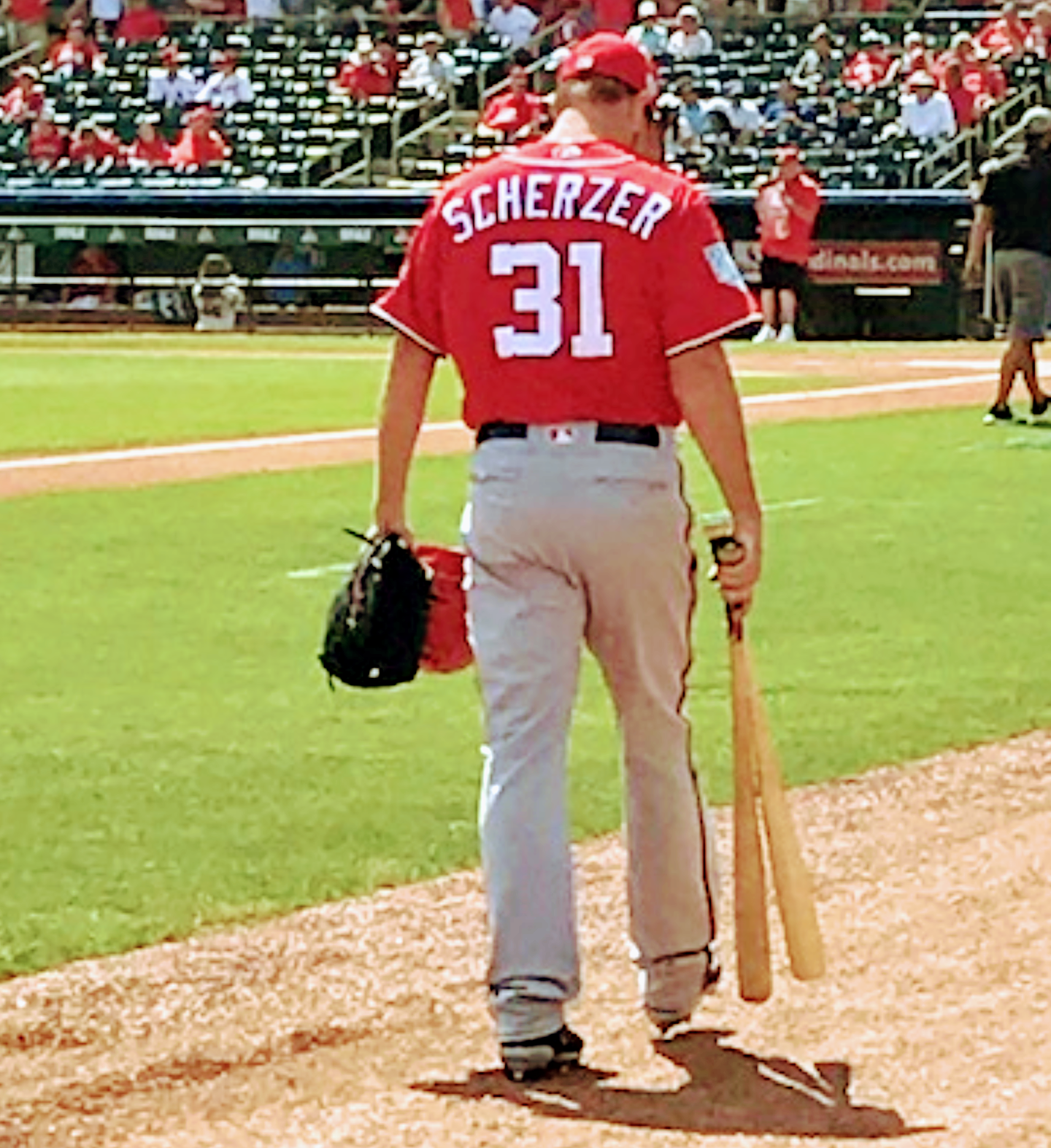 Was it ever a question as to who the Washington Nationals’ Opening Day starting pitcher would be? Officially, Max Scherzer was named after today’s game to his sixth Opening Day start by manager Dave Martinez. Joining him will be 25 other players on the Opening Day roster. There looks to be twenty-one locks, leaving five spots up for grabs. General Manager Mike Rizzo likes his veterans in key spots, and certainly he will make final decisions with his manager and coaches before the team boards the plane a week from Monday for Dulles Airport.

One of the unknowns right now in projecting an Opening Day roster is the number of bullpen arms the team will carry. The Nats manager this morning said that the stamina of their starting pitchers at the end of camp will determine whether he goes with nine relievers in the bullpen with four bench players or the new standard of eight in the bullpen and five on the bench to start the year.

“We’re still trying to sort all that stuff out,” Martinez said. “It all depends where our starting pitching is. … But we still haven’t made any decisions on which direction we want to go.”

For my purposes, I am going with the former rather than the latter which gives a spot to Erick Fedde as an extra long-man. In mid-April, Fedde would then be optioned to Triple-A and be replaced by an extra bench player who I would expect to be either Gerardo Parra or Yadiel Hernandez. The issue is that Parra still is not at 100 percent after recovering from knee surgery.

“[Parra] has actually been pretty good,” Martinez said. “He’s still about 85-90 percent. But he’s moving around pretty good. We’re trying to get him as many at-bats as possible. I know he’s had some at-bats down in some of these sim games he’s been playing, but getting in a real game for him is good.”

So far this Spring, Hernandez has been one of the best bats on the team, but he has also faced a lot of lesser arms after he has entered games as a substitute. Last week, Martinez said he did not see how he could carry another outfielder who could not play all three outfield positions. At the top of the offensive performers, it is Josh Harrison, Josh Bell and Ryan Zimmerman ahead of Hernandez.

“I love having [Bell]. He is unique. He is a switch-hitter with power from both sides. He loves to play the game. He is a great teammate in the clubhouse,” Martinez said. 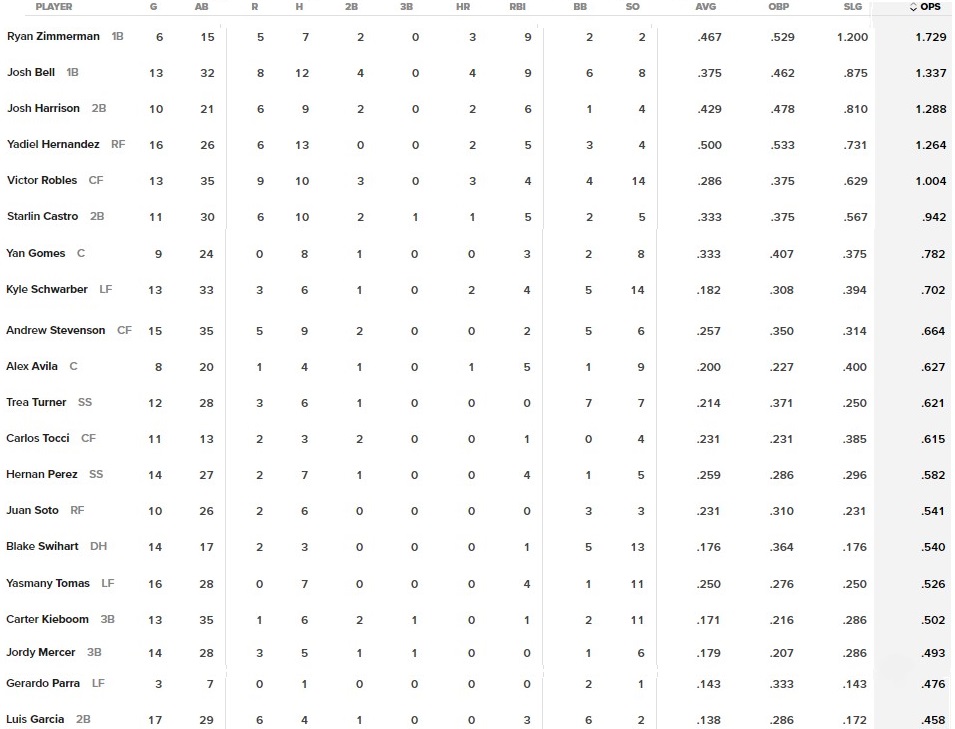 You have to wonder if Rizzo will want a veteran reliever like Luis Avilan or T.J. McFarland or go with Sam Clay. Who? Yes, Clay has really put it all together and has recorded a 0.86 WHIP in Grapefruit League play with a 2.57 ERA with the only runs coming off of a 2-run homer from a Clay slider. As we know, Clay had not given up a home run in years until Yuli Gurriel got him for a 2-run shot for the only runs that Clay has on his record this year.

“[Gurriel] hit a slider. I thought it was a good 3-2 pitch,” Clay told me tonight. “Didn’t miss location. He got out in front of it and put a good swing on a good pitch.”

The other advantage is that Clay is on the 40-man roster and has minor league options. But having options can also be a disadvantage, as Clay could be yo-yo’d as is often seen with young players who are moved between the active roster and the minors.

One of the pitchers who is competing for a spot is Austin Voth. He had a good outing on Saturday and helped his chances for a spot in the bullpen.

“I feel I put myself in the position to either be the fifth starter or go into the bullpen. I’ll be whatever they need me to be,” Voth said.

The starting five  in the rotation looks to be set with Joe Ross getting the final spot in the starting rotation over Voth and Fedde. Choosing who the eight or nine best relievers are is based on the eye test, statistics, and and small sample sizes. 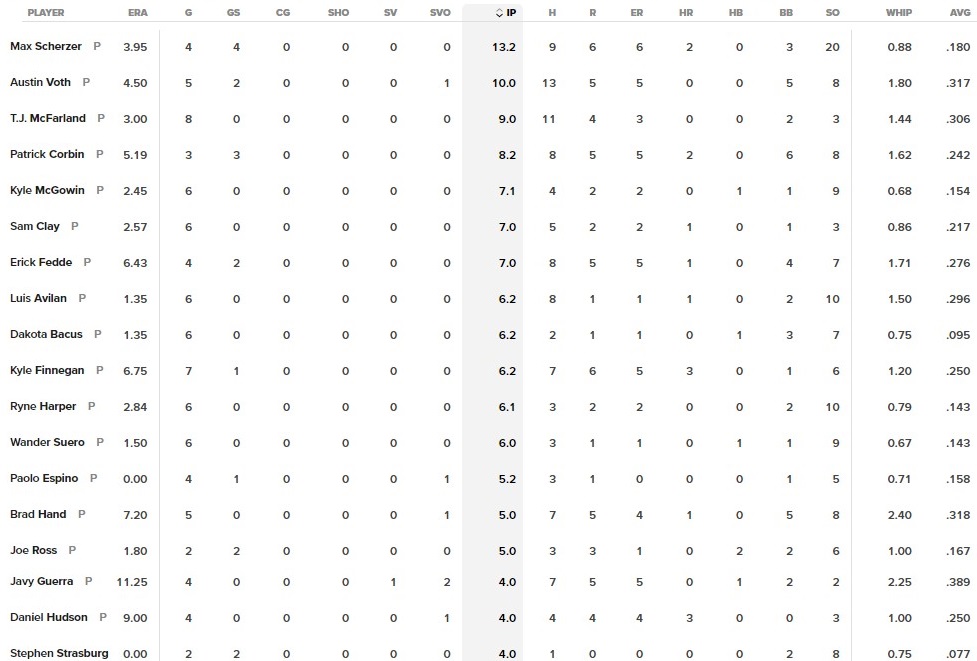 The pressure of Spring Training is much different from that of Opening Day. We have also seen roster moves in the first few days of the regular season like when Jake Noll was optioned after the fifth game of the season. This is why Rizzo likes his tried and true veterans who have been there before.

There are officially 48 players still in big league camp, and here are the 26 players who I am projecting for the Opening Day roster. Of course there is a chance of this changing, and a very good chance that Rizzo and Martinez have a different roster as they call the shots.