Game #17 Austin Voth gets the start in West Palm Beach 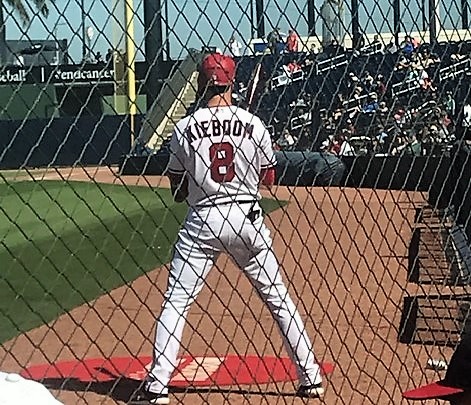 We have been waiting a long time for Carter Kieboom to square up a ball. It had been ten long days since the 23 year old tallied in the H column in the scorebook. His manager, Dave Martinez, told him to just put good contact on the ball and not to worry about the results. It is easy to say while you are watching your batting average drop below your listed Walton High School weight of 185, and the boos and jeers from the sparse crowd that has been reduced to about 1,000 fans due to COVID constraints, can be heard clearly by the players. Fortunately, last night it was Kieboom who had the last laugh with a booming double to the opposite field. His manager took him out of the game to finish on a positive note.

“He hit the last ball really well,” Martinez said after the game. “He drove the ball to rightfield so that was a good sign. … Absolutely, like I said this game is result-driven.”

Sure it is result-driven, but Davey had just told us the other day that the process is what he is focusing on and not the results.

“Down in Spring Training, I don’t look for results, as far as getting hits and stuff,” Martinez said a few days ago. “I want him to go up there and relax and hit the ball hard. That’s all I’m asking for him to do down here, and then just have good at-bats.”

Kieboom is back in the starting lineup, but Victor Robles will get a day-off after he tweaked something in his back after a slip on a fielding play. They do not think it is anything major.

“Hopefully, we’ll get him back out there tomorrow,” Martinez said during his pregame Zoom session with reporters. “He’s going to take some swings and go through his regular routine. But he said he felt fine.”

The first major medical issue in camp as reported yesterday is the blood clot in Will Harris‘ right arm. He is in St. Louis for an examination with vascular surgeon Dr. Robert Thompson of the Washington University Center for Thoracic Outlet Syndrome at Barnes-Jewish Hospital. Thompson has treated a number of professional athletes with blood clot issues as well as thoracic outlet syndrome. After the examination, they will come up with a plan, which could require surgery.

As with any issues with players landing on the IL, other players will get an opportunity. That is how it works. While nobody is expecting a player to get Wally Pipp‘d, there are spots open now in the bullpen. A pitcher like Sam Clay is one of the bright spots of the spring. Only one pitch has blemished his record. He has looked like a pitcher who might get a chance. The other player looking for a spot is outfielder Yadiel Hernandez who is competing with Josh Bell for the most barreled up balls this spring. While Bell has his spot solidified, Hernadez is fighting for a bench spot.

With just seven “A” games remaining on the Grapefruit League schedule, it will be a fight to the finish while at the same time the unknown if the Nats will go with a 5-man bench and 8-man bullpen or keep an extra bullpen arm to start the season and go lean with a 4-man bench. This is one of the other storylines for almost every team.