Game #3 against the Marlins with some familiar faces in the lineup! 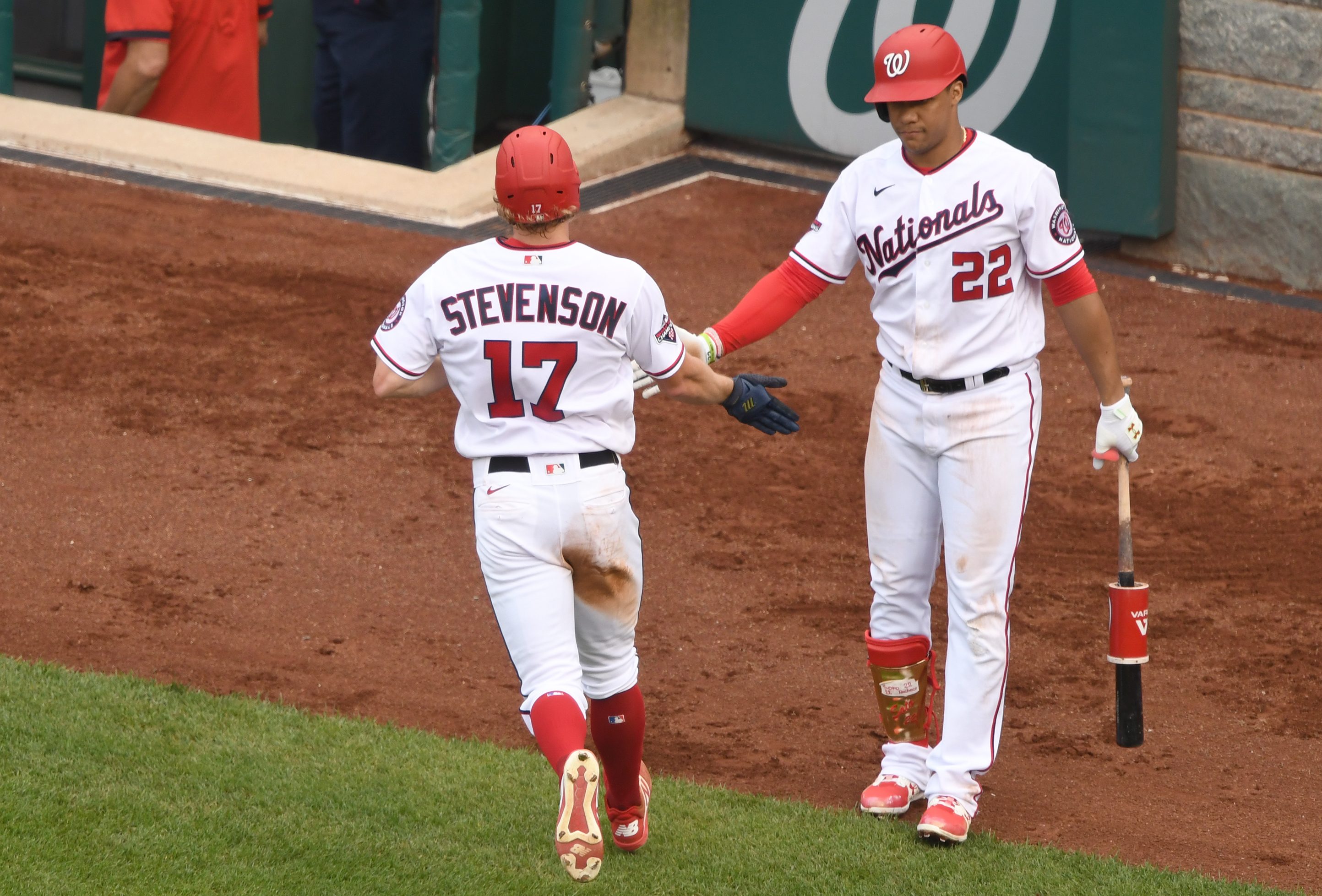 There is a whole lot of discussion going on as to whether Andrew Stevenson has an option remaining based on the 2020 rules. This may very well be decided by an arbitrator as Stevo and many other 40-man players now have another option. It would allow the Washington Nationals to place Stevenson in the minors again — not that it is part of a plan as Stevenson appears to be a lock for the Nats bench at this point — but plans change.

While there are evaluators who have named the Nats’ farm system as the worst in the Majors, general manager Mike Rizzo addressed this in January on a virtual call with an invited audience of VIP season ticket holders as to just what he sees as the future of the farm system:

“When you hear the names Jackson Rutledge, Cade Cavalli, Cole Henry, and Tim Cate — these are starting pitching prospects who could impact the big league club as early as some time in 2021,” Rizzo said. “And Yasel Antuna and our great position prospects, and don’t forget we have Luis Garcia who would be a college sophomore now at 20 years old and played in the big leagues.”

Sure, general managers pump up the volume all the time on their farm systems, but the Nats farm has been producing position players for a while, and even Ryan Zimmerman had heard it before on Nats’ pitching prospects, so sure he is skeptical or at least was.

“You hear a lot of times about [top] prospects and then unfortunately you watch them throw and you’re kind of like, ‘Ehh,’” Zimmerman said about the past. “But I just feel like sometimes you read about these guys and then it’s a little underwhelming [when you actually see them], I guess is what I’m trying to say. And to have five, six, seven guys where you’ve read about them and then you watch them throw and they actually live up to what they’re supposed to be — it’s kind of exciting. It’s been cool to have that youth in camp.”

That is quite the endorsement from the only player who has been in the Nats organization for every year of their existence. Zim said he did not want to name names, but certainly there were a few that flamed out like Josh Smoker, A.J. Cole, and even Ross Detwiler. There were some who did not make it because of injuries like Matt Purke, and others who were traded away before they could shine in Nats’ uniform like Lucas Giolito, Jesus Luzardo, and Robbie Ray to name a few who became stars elsewhere. Then there were the most recent top prospects of Erick Fedde, Austin Voth, and Joe Ross of which all three are just battling to be a fifth starter, and none have shown that they are top of the rotation pitchers. Time will tell if Rutledge, Cavalli, Henry, Cate, Andry Lara, Mason Denaburg, and Seth Romero become stars, and time is what they have.

Manager Dave Martinez broke news this morning that Jon Lester would leave camp to have his thyroid gland removed. Clearly this will change the short-term plan, and it is possible Lester will not be ready for the first week of the season when his spot was to come up in the rotation. As many will remember, Lester survived lymphoma cancer in 2006 and went through chemotherapy, and returned to pitch for Red Sox in mid-2007. More importantly, thoughts and prayers for Jon as he goes through this surgery and recovery.

Big news on Jon Lester leaving camp to have surgery to remove his thyroid gland. Prayers are with him and a speedy recovery. https://t.co/mqCQ1glQYb

For today’s Spring Training game, we might see some of those youngsters pitching. Today’s starter is Fedde who will go one to two innings on a pitch count. This is his second start of the Spring, and he threw 28-pitches three days ago. Clearly, Lester is scratched for tomorrow, and the Nats will now pitch a bullpen style game with Kyle Finnegan as the opener. The lineup is one you have not seen before and Juan Soto will make his Spring debut after fouling off a pitch off of his foot over the weekend. 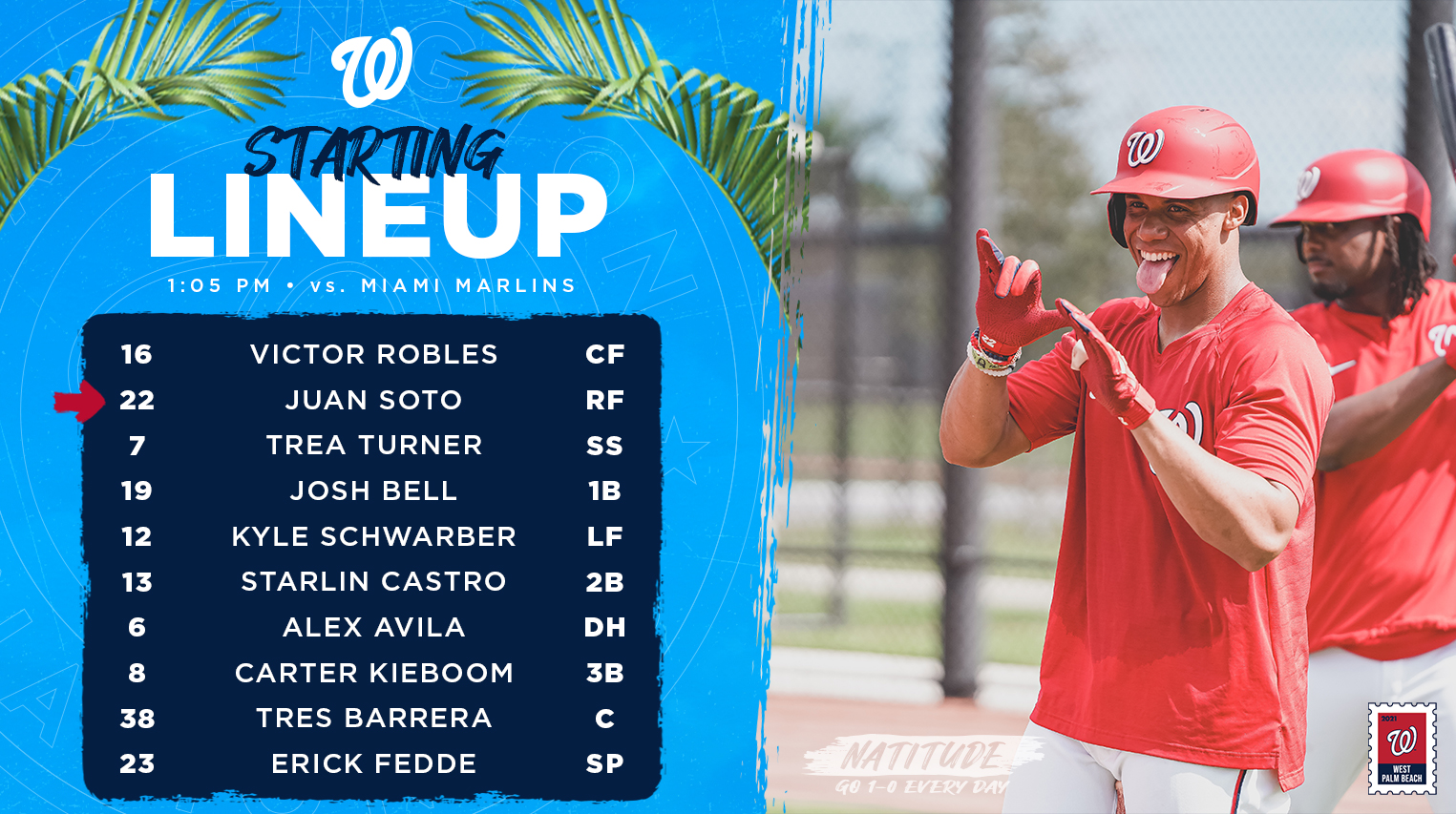 Graphic from the Washington Nationals