#Nats follow a familiar script in another familiar loss 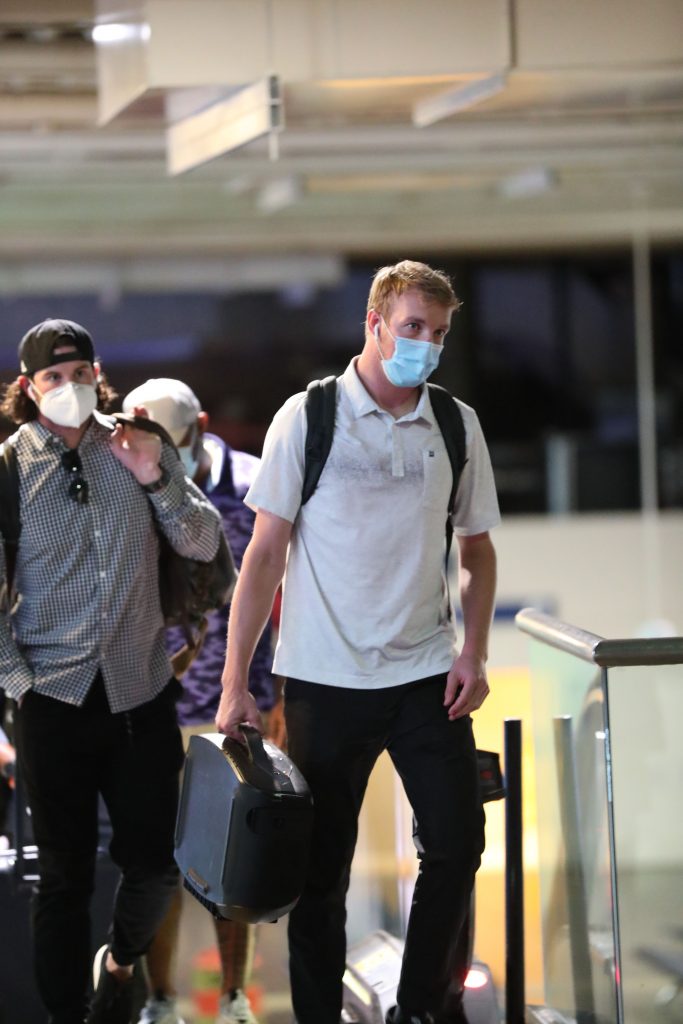 Erick Fedde is good about observing mask etiquette, but not as good about keeping the ball in the ballpark. (Photo by Hal Jak for TalkNats)

You’d think when you have lost 20 games, you would have found some new ways to lose. Unfortunately, the Washington Nationals treated fans tonight to a virtual carbon copy of the game they lost yesterday…and the day before that.

If you missed the game, picture this: A young starter who entered summer camp not assured of a rotation spot struggles to keep the ball in the yard, giving up two home runs as he puts his team in a big hole early on. The offense, led by red-hot 1-2 hitters Trea Turner and Juan Soto, begins to chip away at the deficit, only for the bullpen to push the game further out of reach.

“But wait,” you say. “I can picture that! That’s just the game that happened yesterday in Boston!” OK, now picture it at Citizens Bank Park instead of at Fenway. There, you didn’t miss much.

Oh, except the parts you missed. Like Turner going 4-for-5, and at one point teaming up with nine-hole hitter du jour Michael A. Taylor to go back-to-back. Or Soto slugging two no-doubters, driving in Turner both times. Or Sean Doolittle, looking for the first time this season as though rumors of his demise have been greatly exaggerated, striking out two in a 1-2-3 inning that even saw batters swing and miss at his fastball and everything (just like old times!).

Other than that, there’s not much to report.

Erick Fedde only allowed six baserunners in the game, but unfortunately, all of them scored, three of them on a bases-clearing double by Jean Segura in the fourth inning. Fedde took the loss, although he bettered Sunday’s losing pitcher Austin Voth by managing to not completely torch the bullpen with a season-high six innings.

Wander Suero almost wriggled out of a self-made jam after a leadoff single followed by a double put two runners in scoring position with nobody out. He struck out speedy center fielder Roman Quinn and then induced a harmless flyout to left from Andrew McCutchen, but as Yan Gomes called for a 1-1 fastball up and out of the zone to slugger Rhys Hoskins, he instead left the offering out over the plate and Hoskins duly rifled it into left field for a two-run double that ended up being the difference in this one.

The Nats had a few close calls, with rookie Luis García coming up in key spots in the second and eighth innings, driving a pitch deep to left, and then watching it fall into the outstretched glove of a Phillies outfielder to end the threat. Gomes, who also tore into a pitch in the fourth only to watch it die on the warning track in right field, saw his hitting streak end at ten games.

Manager Davey Martinez said before the game that the Nats are happy with the team they have, explaining away his boss Mike Rizzo’s decision to stand pat at today’s trade deadline. In fact, Martinez used the team he has tonight, deploying both Josh Harrison (1-for-2) and Brock Holt (0-for-1) as pinch hitters to gain a favorable platoon matchup in leadoff spots. We’ll see how he configures tomorrow’s lineup as the Nats have now lost three games in a row and stand at eight games under .500 entering the final month of the season.