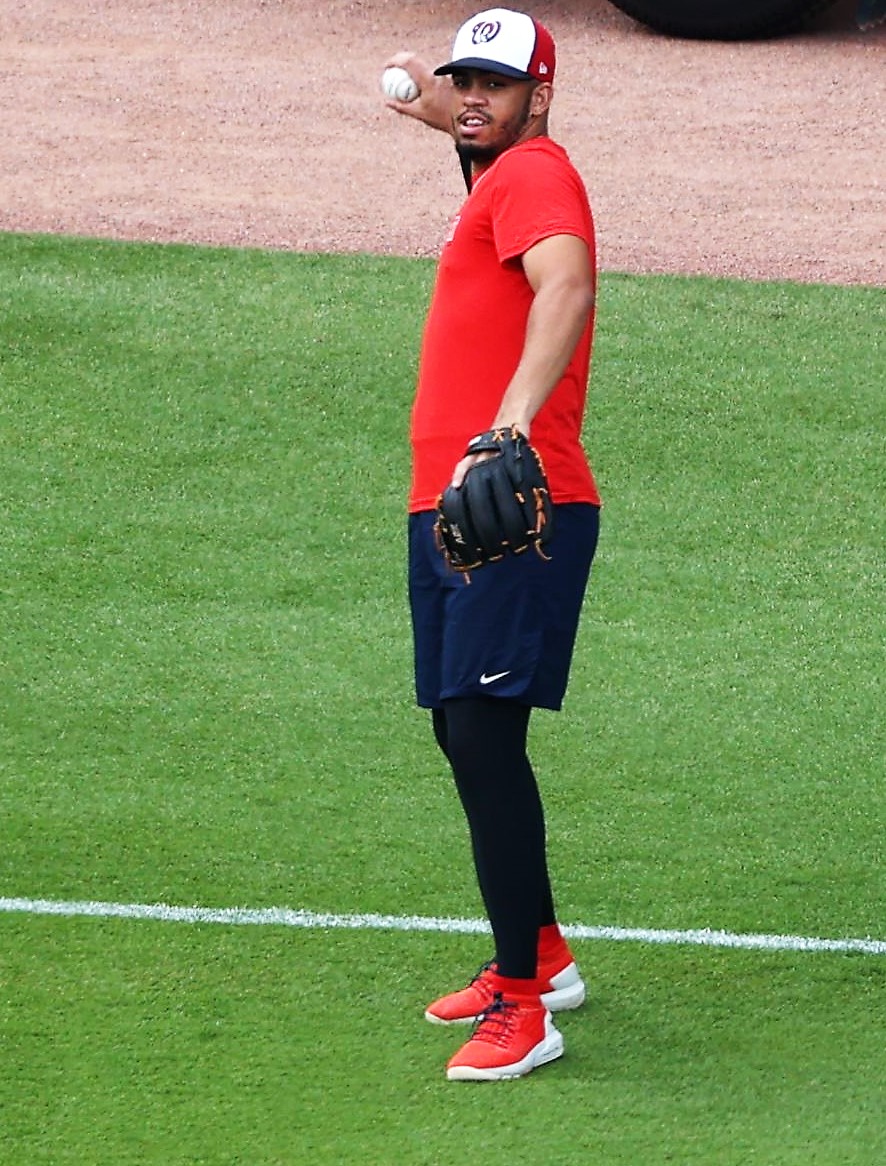 There is a new mid-season update from Baseball America that has Carter Kieboom ranked as their 17th top prospect, and Luis Garcia as their 100th top prospect. No other Nats players made the list as expected. As always on that list, Minor League performance does not guarantee Major League success and vice versa. Several of the players from that Baseball America list have struggled during their callups. One of the most notable callups is Jo Adell of the Los Angeles Angels. Truth be told, he has given up more home runs as a defender (see blooper reel) than he has hit which is zero. His .211 batting average based on 38 at-bats is not a huge sample size, but it is not a stretch to say he is struggling. Adell is № 3 on that list in all of baseball.

Their synopsis: “Garcia was overmatched as a 19-year-old in Double-A last year, but he still shows advanced contact skills for his age and the tools to be an above-average or better defender in the middle infield. The Nationals showed their faith in him by calling him up Aug. 14.”

We have seen the 20-year-old for all of 17 at-bats. The sample size is not large enough to create any imagery that has shown that Garcia has any glaring weaknesses in his swing because he is already showing that he will adjust in 2-strike counts. His mentor is Juan Soto. Yes, he said he modeled his 2-strike approach after the Magic Juan’d.

Luis Garcia is currently the youngest player in Major League Baseball, and he made history against the Atlanta Braves on Monday night by becoming the first player born in this millenium to hit a home run since he was born after January 1, 2000. Garcia has also done a good job fielding his position at second base. His callup was necessitated by the broken wrist injury to Starlin Castro.

In a baseball coincidence on May 7, 2010, Castro became the first player born in the 1990’s to hit a home run in that decade. He accomplished that feat in his Major League debut for the Chicago Cubs.

There is certainly a new age movement going on with Garcia, Soto, Kieboom, and Victor Robles that has brought a different look forward from the Los Viejos of the 2019 World Series team.

“[Luis] and Juan and Carter, they play baseball and they know where to go with the ball, what decisions to make,” shortstop Trea Turner said. “Obviously, they’ll make mistakes here and there, but they learn quick. You can see from Luis that he’s made a lot of good plays already, and it’s just the natural instinct he has, and sometimes you can’t teach that.”

On offense, Garcia is batting .353, and pitchers are coming after him. The rub on him in Double-A was the poor BB/K rates, but he was a youngster at that point when he was still playing at that level as a teenager. Most of his peers would have been in Low-A. So yes, he will have to improve that BB/K ratio to really prosper, but for now we are enjoying that batting average and the surprising show of power even though Atlanta’s official scorer robbed him of a double at the wall that they ruled a single with an error. He will need to show he can cover the plate and already has shown he can go the other way.

“There’s also been a lot of weak contact and some trouble adjusting to pitchers working him soft away, whether it’s swinging-and-missing or rolling over,” Keith Law writes for The Athletic.

What does Keith Law consider a lot? Statcast clearly disagrees with Law and so does FanGraphs, and the Statcast numbers are based on objective measurements. His ranking is second on the Nats with most barreled up balls as a percentage of balls in play at 16.7%. Here is his BrooksBaseball zone profile.

The younger García already has more MLB at-bats than his father accumulated in his career for the Detroit Tigers. The elder Luis Garcia by the same name only had one start in his career and nine at-bats. Baseball can be cruel. His father spent ten seasons in the Minor Leagues and grinded it out as a middle infielder. His son was born in New York during his 2000 minor league season while he was with the Cardinals Triple-A affiliate in Memphis. What the elder Garcia did was pass along the baseball genes to his son.

“I feel good,” García said. “I feel great to be here. I want to be here for a long time, and now I’m so excited, so happy to be here and be a good teammate.”

Nobody is expecting Garcia to put up Soto numbers. Garcia just has to show that he can be a quick learner and so far so good.

“The kid’s a player,” manager Dave Martinez said. “He loves to play the game. He goes up there, he works good at-bats, he battles. You watch him, he’s pretty smart. All you’ve got to do is tell him once where to play, and he’s got it. You don’t have to move him around. He’s going to get it. He’s going to learn. He loves being here, we love having him. He’s got a lot of energy. He’s always cheering for his teammates. He’s a lot of fun to be around.”

The other key part of having Garcia is that he gives Martinez another lefty bat in a lineup that was looking very right-handed. With Howie Kendrick out, we calculated as previously reported that the Nats average age with Garcia in the lineup was slightly over 27. That is a big difference from the Los Viejos and not unnoticed by the 27-year-old shortstop.

“We got a pretty veteran team for the most part, but the guys that aren’t veterans are very, very young,” Turner said on the age of the team. “I am one of the few in the middle [of the age range]. Some days I feel old, and sometimes I try to go with the young guys and be a little more energetic. I think it’s good thing. You can feed off of both sides, the experience on one side and the energy of the young guys. I will play both sides.”

Without fans in the stands, players do have to self-generate the energy level, and having that youth on the team certainly can keep that percolating.