Game #9 Max Scherzer gets a key start against the rival Mets! 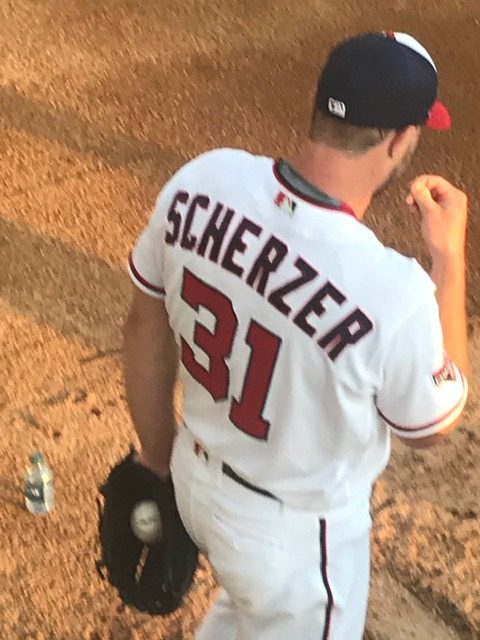 This is a quick two-game series against the Mets with eight more games to go to finish their 2020 season matchups. Neither team yesterday looked like their projected 2020 rosters due to injuries and opt-outs. Juan Soto still has not appeared in a regular season game, and when manager Dave Martinez was asked last night if Soto would start today, Davey kind of danced around it. We know Robinson Cano of the Mets will not play because he was placed on the 10-day IL.

Speaking of dancing, Soto was epic in a celebratory dance on top of the Nats dugout. He seemed to just be a fan last night as he never came into the game when there were some clear spots for a pinch-hitter.

You choose who did it better, Soto or the kid they dubbed the Dugout Diver when he tore off his shirt and and did a slip-n-slide across a wet Nats dugout after Daniel Hudson recorded the final out in the 2019 World Series.

Clearly, Juan Soto is a national treasure, but we would like him dancing in the dugout instead of on-top of it. We will be in wait and see mode for the lineups to be posted shortly as we are publishing this piece before lineups are official.

For this game, the Nats have a 3-game winning streak ongoing and have Max Scherzer back on the mound against the Mets righty Rick Porcello. The Mets pitcher brings a 13.50 ERA into this game. Scherzer is pitching on two days of extra rest after his 7 1/3 inning shutout of the Blue Jays on Wednesday give Max two additional days to recover from throwing 112-pitches in that contest that the Nats won over the Blue Jays by a final score of 4-0.

Stephen Strasburg is scheduled to throw a “sim” game today. This could be the final tune-up to get Strasburg back into the rotation — we just don’t know where Martinez and general manager Mike Rizzo would want to seed Strasburg into the rotation. With the day-off tomorrow, Patrick Corbin could pitch on Sunday on regular rest with Anibal Sanchez on Friday and Austin Voth on Saturday to allow the Nats to leave Erick Fedde in the bullpen. The former first-round pick sure does look like an opener or someone who can give you length as a middle reliever to go 3-innings.  If all goes well with Strasburg’s sim game, expect a new rotation seeding of Corbin-Scherzer-Strasburg-Sanchez-Voth -or- Corbin-Strasburg-Scherzer-Sanchez-Voth.

MLB.com published their mid-season rankings of top prospects. Only Carter Kieboom who ranked at № 23 in MLB’s rankings was in their Top-100 as Luis Garcia fell off that list. Garcia is still № 2 on the Nats team rankings and has a high ceiling as he is only 20 years old.