Predicting the Opening Day roster for two weeks from today! 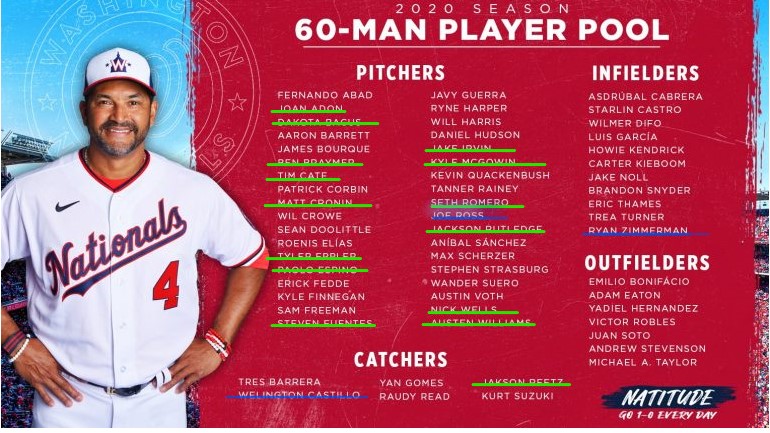 Let’s try to come up with the 30-player Opening Day roster, from the 42 players who are still in big league camp at Nats Park. We already have some clues from both General Manager Mike Rizzo and manager Dave Martinez that the Nats will carry five starting pitchers, and Carter Kieboom will be the starting third baseman. The 40-man roster stands at 36 players and that will allow Rizzo to add non-roster invitees to the active roster.

That is my 30-man Opening Day roster with a lot that can change in 2 weeks when it is time to play ball on July 23 at 7:08 PM EDT. There are 3 NRIs that I have added, and they are close calls on the last players in. Of the 42 players in big league camp, there are 33 players on the 40-man roster and 9 NRIs. At the Alternate Training Site in Fredericksburg, the Nats have 3 players on the 40-man roster as they cut Ben Braymer, Kyle McGowin, and Austen Williams yesterday. In total, there are 17 players assigned to Fredericksburg.

On the bullpen, I have Guerra, Freeman, and Finnegan as my last 3 players in. Certainly, those last three are not crucial with the 3-batter minimum rule.

In the outfield, maybe it is Yadiel Hernandez over Bonifacio. The other players make sense as you want a minimum of five outfielders.

On the infield, you have a combination of infielders, designated hitters, and bench bats. That seems like a lock for the infield with Difo taking the last spot.

All in all, this roster has symmetry with 15 pitchers and 15 position players. After two weeks of baseball the roster will be chopped to 28 players and that will be an easier task and then getting to 26 players two weeks after that will be a little more challenging.

There will be a traveling taxi squad of 3 players for road games which must include at least one catcher. Taxi Squad players will not be paid an MLB salary or accrue service time, but they will receive the Major League per diem allowance of $108.50 along with their Minor League salary along with all travel and hotel expenses covered by the team. These three taxi squad players will be permitted to work-out with the team on the road, and the taxi squad catcher can serve as a bullpen catcher. At the end of the road trip, taxi squad players will return to the team’s Alternate Training Site in Fredericksburg while the taxi squad catcher will be permitted to stay with the team as a bullpen catcher for home games.

A note we reported on Twitter from a source is that the 60-man pool players at Fredericksburg will be staying in a hotel near the ballpark. This is a divergence as most Single-A and Double-A players stay with host families. The team will cover the cost of the hotel rooms in their per diem.

Health as always will be the most crucial factor in each roster point. There of course could always be a new acquisition to throw a wrench in all of this. Again, a lot can change in two weeks.