Contact with a COVID-19 person translates to self-isolation; Juan Soto and Victor Robles are in that protocol according to source! 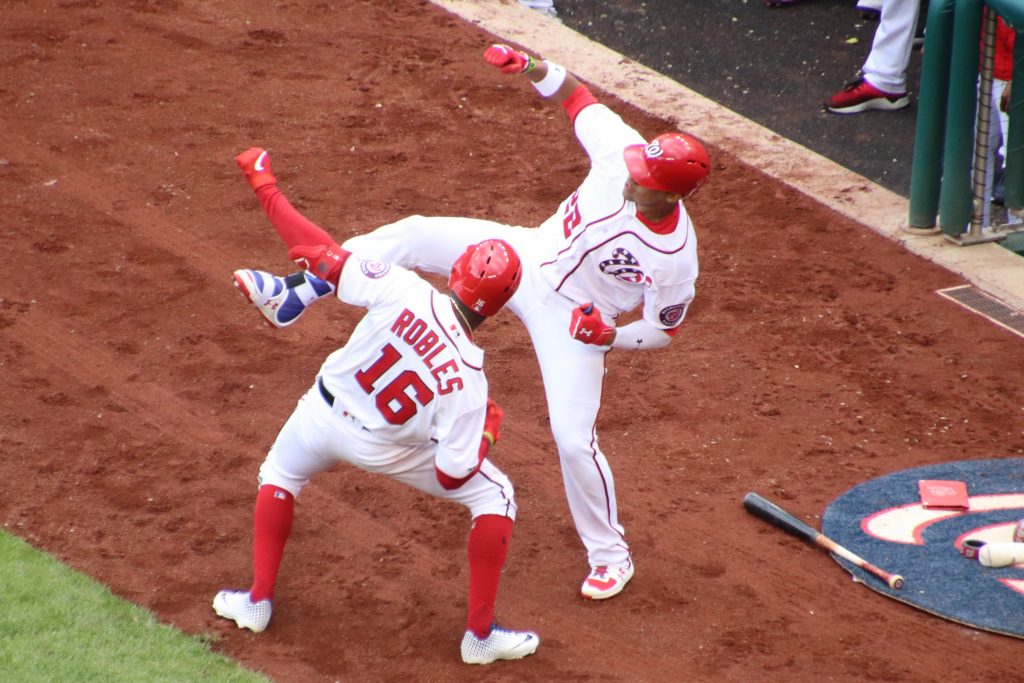 Robles and Soto celebrating in 2019; Photo by Marlene Koenig for TalkNats

The 101-page MLB COVID-19 manual on health and safety protocol that was sent to teams last month has a lot of information to get through, and pages are being added to the manual as well as clarifications and notes.  There is plenty to digest about wording and rules for the teams and their players, coaches, front office and clubhouse personnel (Covered Individuals).

“Major League Baseball’s operations manual,” Kevin Acee of the San Diego Tribune writes, “addressing procedures for the 2020 season in light of COVID-19 was 101 pages long when it was delivered to teams earlier this week and is evolving pretty much by the day with addendums and appendixes. …

“There is nothing in the manual that addresses what happens if a large number of players test positive or stipulates what might be considered a large number. A league source said an agreement between the league and the Players Association gives MLB Commissioner Rob Manfred the right to suspend the season if the ‘integrity of competition’ is jeopardized.”

Every day seems to bring a new wrinkle in the fight against COVID-19. MLB is treating the players and clubhouse personnel like responsible adults and “MLB will not formally restrict the activities of Covered Individuals when they are away from Club facilities, but will expect the Covered Individuals on each Club to ensure that they all act responsibly.”

That part of the original 101 page manual about “act responsibly” sounds like the Budweiser ad for “drink responsibly” and you hope that players heed the message. Everything hinges on it.

What the Nats may have is a situation like Aaron Nola of the Phillies went through when he came in contact with an infected person with COVID. Nola had to self-isolate and gave his thoughts to the media.

“If you don’t have symptoms and you come in contact with somebody who ends up testing positive, you’re out for probably at least seven days,” Phillies pitcher Aaron Nola said. “That could possibly be two starts. It’s obviously going to be a hard part of it. And sometimes it’s out of our control. We just have to try to do our part every day.”

Sources have told me that both Juan Soto and Victor Robles are in self-isolation in their apartments near Nats Park. Who they came in contact with is a mystery, and it might not have even been the same person.

We knew on Monday that something was up with Soto when a Dominican source sent us an ominous note that we sat on because it would have seemed that Soto had COVID-19, and we could get no confirmation of why he was self-isolating on Monday. The message read, “No puede irse y el equipo le prohíbe salir del apartamento” translates roughly to that Soto was self-isolating in his apartment per team instructions. Okay then, and fortunately we sat on that because on Tuesday we learned that both Soto and Robles were both on self-isolation as they came in contact with a player who tested positive for COVID-19. How long they will be out is another issue as Nola says expect at least 7 days, but the COVID manual says:

“… Contact tracing is to be conducted and all other team employees deemed to have come in contact with the symptomatic player are to be tested and monitored for symptoms and to self-isolate until test results are known (approximately 24 hours),” Acee writes. “Additionally, all areas of a facility in which the symptomatic player had recent contact are to be disinfected (beyond the regular cleanings called for in the manual).”

According to Jesse Dougherty of the Washington Post, there were players he did not see on Tuesday. Big names actually, and Dougherty also listed: Howie Kendrick, Starlin Castro, Luis Garcia as players he did not see there in addition to Soto and Robles. There could be other players missing as the media is not being given a daily attendance sheet. Earlier in the day a media person said he saw Castro but later deleted his tweet.

“I sat in my office yesterday morning, and as we all know I canceled practice,” manager Dave Martinez said. “And that’s because that’s how much I care about these guys. I want to keep them healthy, but also everyone else around us healthy. We’ve got our coaching staff, our training staff, everybody’s involved here. If two or three guys go down because they’re ill, it doesn’t do anybody any good. And we still don’t know what this thing really does to each individual. It’s different for each individual. So my job is to keep these guys safe and healthy and get them ready to play.”

The two mystery players who have COVID on the Nats have not been identified. General Manager Mike Rizzo said the 2 players who tested positive are asymptomatic. That is some good news. Rizzo was supposedly in the dog house on Monday from MLB commissioner Rob Manfred for comments made earlier in the day. Yes, teams are limited in what they can share about players’ health, and you cannot place a player on the IL (injured list) and put COVID as a reason. It also seems that MLB is trying to keep it as positive as possible, because, you know, public relations purposes.