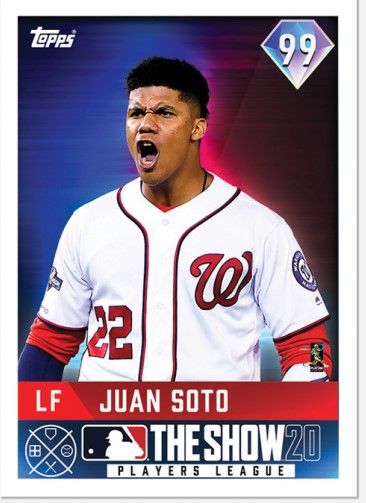 Major League Baseball is just one of several sports that turned to an alternative method to keep fans engaged during the recent situation: eSports. They created The Show Player’s League, a tournament contested by individuals from teams across the MLB on the popular game MLB: The Show 2020. Featuring top stars such as eventual winner Blake Snell it acted as a conduit for fans to interact with baseball and raised money for good causes at the same time. It raised funds for official MLB charities the Boys and Girls Clubs of America and Boys and Girls Clubs of Canada.

To commemorate the tournament, Topps released a collection of 30 cards, depicting the players who represented their teams. That meant our very own Juan Soto featured, alongside the likes of Snell and Bo Bichette of the Blue Jays. Topps’ move only further blurs the line between eSports and real sports, which has become increasingly difficult to differentiate between over the last few months.

That is particularly evident over in Europe, where top stars have been playing eSports throughout the spring. An article on eSports by Bwin explains how the absence of live sport has caused many people to turn to the electronic variety for entertainment, with soccer proving very popular over in Europe. Some of the biggest teams in the world have taken part in online competitions which have kept fans delighted. That was also the case with the Player’s Show here in the US, which helped keep fans connected during the crisis.

Sadly, for Nat’s fans at least, Soto was unable to find a place in the quarter-finals. He finished with a 17-12 win ratio, impressive enough, but placing 14 out of 30. The top eight players progressed to the quarter-finals, where Blake Snell impressed. He became a clear favorite to win the championship after a tough start to the virtual season, boasting a meager 2-2 record. He recovered well, winning 22 of his last 25 regular-season games to top the standings with one victory more than Joey Gallo. In the playoff matches, he suffered just one loss in the series, against the Mets Jeff McNeil in the semi-final. Gavin Lux was easily dispatched in the quarter-finals 2-0, and Lucas Giolito brushed aside 3-0 in the final.

The tournament was widely regarded as a success, with Commissioner Rob Manfred saying of the players.

“They showed their competitiveness and at the end of the day, that’s what the fans love to see,” Manfred said. ”Emotion and competitiveness really go a long way and it made the programming very good.

“It gave our fans an opportunity to interact with the game we all love in the absence of live play on the field,” Manfred added. “We hope in a small way, it helped fill a void in their lives.”

Now, thanks to Topps, you can interact with the game on another level and commemorate the inaugural Players Tournament with your own 30-card tribute collection, or even a special set that contains 31 cards, one of which is signed by a player that participated in the tournament. However, Topps was only selling them on their website for 22 days from May 20th, which means picking up a set may be challenging for avid collectors, who will need to scour their favorite auction sites and fairs for a chance to own a set or individual cards.