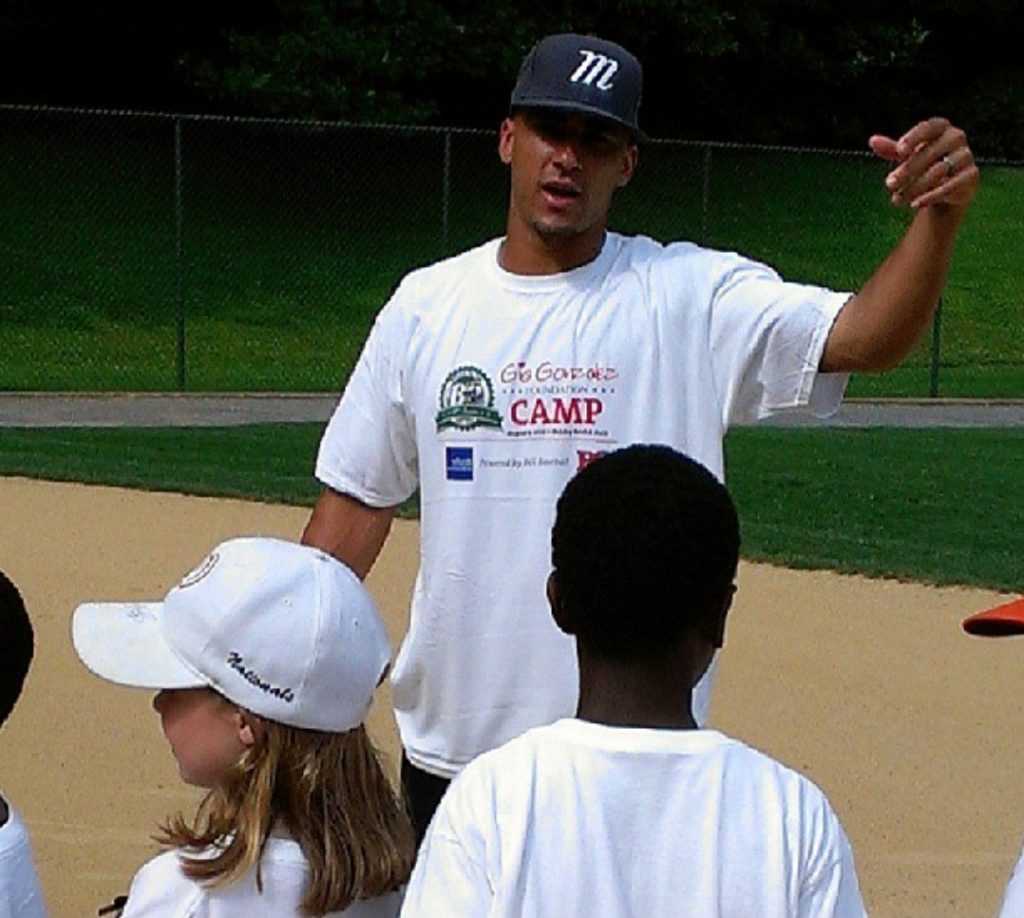 This young boy watched Ian Desmond talk about baseball; He had never put on a baseball glove before this day; Catching a baseball would be a first!; Photo by Mitchell Layton

Last night Ian Desmond wrote a nine page message on Instagram to the world about his life, racism, impact, education, disparity, exclusion and more. Some focused just on him opting-out on the rest of this 2020 season while to me he was opting-in on a bigger message.

When I first read Desi’s message on Twitter, someone just cut and pasted the 9th page which covered his decision to opt-out. At first, that was all I saw. Overnight, I stumbled upon the first eight pages. It was powerful. It brought me back to previous times spent with this young man when he was in his early 20’s trying to become a Major Leaguer.

There was that time in 2006 when Nats manager Frank Robinson told me about Desmond in a conversation we had about promising prospects in the Nats depleted farm system.  I probably met Ian a dozen or so times with the first time in 2006 as he played for the Single-A Potomac Nationals. At the time, he was just twenty years old, a year older than my oldest son, who was going to be a junior in college. Young baseball players have a divergence when they choose pro baseball after high school instead of going to college or straight to a job in the real world. Desmond chose his own path, and it has worked out well for him. In the words of Sammy Sosa to re-paraphrase, “Baseball has been very very good to him.”

Through his volunteerism, Desi has helped young people at the Nats Youth Academy go from the tough streets of Southeast D.C. to a college education. Somewhere he wanted to be the change, and he was and still is. Maybe it was to a middle income child he met at the ballpark or to a kid he met on the street. Desi always seemed to be signing autographs pre-game or shaking hands and taking photos. His best time with kids seemed to be early in the morning when he was in street clothes at the Nationals Youth Baseball Academy. He made his debut with the Washington Nationals in 2009  and was a regular after that. An All-Star in 2012 with a Silver Slugger as the best offensive shortstop. An All-Star of a person, first and foremost.

Through my volunteerism, I spent a few hours with Ian Desmond along with Anthony Rendon at a camp I helped put together for Gio Gonzalez to benefit disadvantaged youth in the D.C. area and some local charities. For hours I rolled ground balls to them as they taught campers the art of the double play. It was August 2013, a week after Gonzalez’s name got cleared from the whole Biogenesis debacle. The camp almost did not happen because of that mess. My business partner and I had pledged $10,000 to the Washington Nationals Diabetes Care Complex at Children’s Hospital in order for Gonzalez to host the camp. Gio was a gracious host and he brought Desi, Tony, and Denard Span with him. Rendon at the time was playing second base as a rookie and was Desi’s right-hand man in the middle of the diamond. 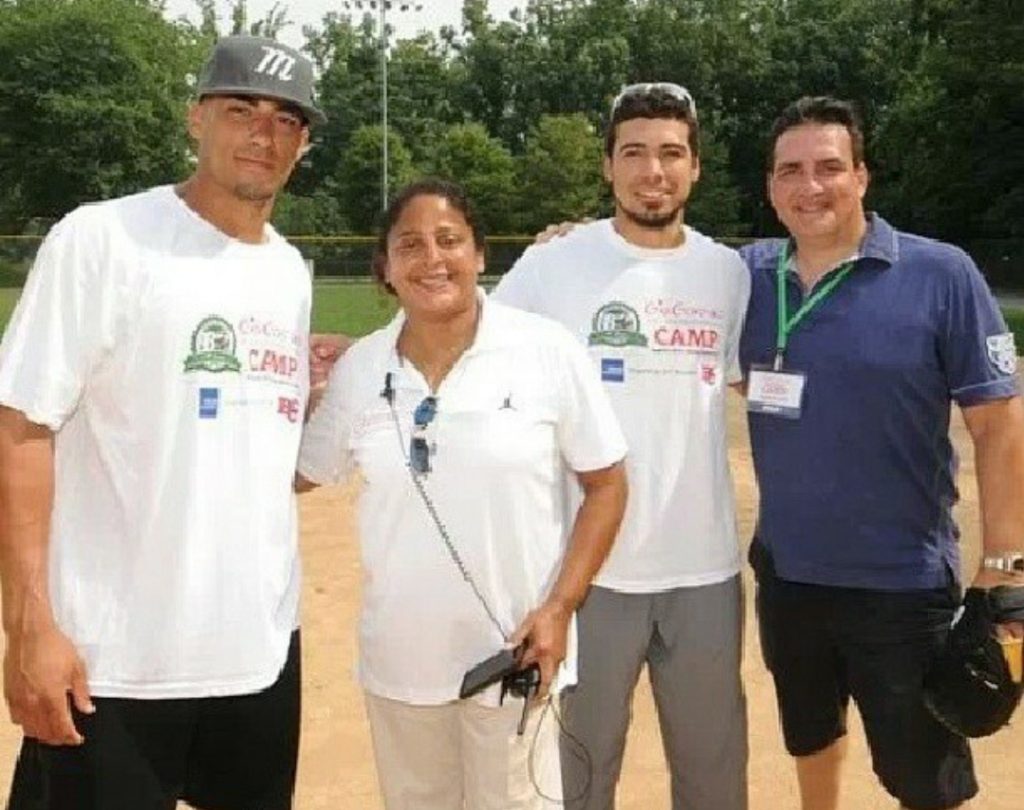 We had over one hundred kids at this camp. Some were disabled. Some were orphans. They were all from disadvantaged backgrounds. Some never had been on a baseball diamond before. As the horn sounded, kids would rotate from Gio teaching pitching to Span teaching outfield, to Desi and Tony with me at the middle infield station.

What you did not see was the young boy who did not know how to put a baseball glove on. He had never played baseball before. They say the greatest part of giving is doing it anonymously when nobody is watching — a random act of kindness. The horn sounded and Desi put his arm around this young boy and they walked to an area at the back of the infield. All campers were gifted gloves by Modells, and this boy was having a hard time with the glove. Desi slid his hand into the large glove on top of this young boy’s hand to help him squeeze the glove. Desi asked me to throw him a ball, and he helped guide this young boys hand to catch the ball like that scene from Sandlot when Smalls caught a baseball for the first time. It was a moment frozen in time, and this was real and not Hollywood. No cameras were around for this one. I caught the moment in my eyes and it was touching. A few brief minutes with this young boy, and maybe it was something that would change his life.

That was Ian Desmond. I’ve shared that story a few times from seven years ago. It gave me a whole different type of appreciation for the person Desi was — and is. He was almost 28 at the time and doing impactful things. His favorite times away from his young family and wife Chelsey was helping kids at the Nationals Youth Baseball Academy. Desi made a choice to be there on that day, and other days too. Giving back is a choice.

Desi would have a chance to be a Nats for life if he signed that $100+ million contract extension. If it happened, everything would have been different. That divine line of destiny changed when he did not sign that extension to stay. His impact on Washington, D.C. was huge. Today, his impact on the world was felt in that Instagram post.

“In clubhouses we’ve got racist, sexist, homophobic jokes or flat-out problems. We’ve got cheating. We’ve got a minority issue from the top down. One African American GM. Two African American managers. Less than 8% Black players. No Black majority team owners,” Desmond wrote on his Instagram.

Walk a mile in another man’s shoes. It is difficult to do. Like many of us, we try to channel away from our painful youth, but they leave an indelible mark in our subconscious while also shaping who we are. Even rich kids have their own share of problems; they just don’t have to fight for a meal or an education. Most of us meet and don’t know each other as we were in our previous lives or our ongoing problems we don’t share. Ian Desmond gave you a few glimpses. Growing up as a biracial kid he wrote that he hated filling out forms when asked to check a box for “race”. Depending on the way you viewed the photos above, you might not know anyone’s race. 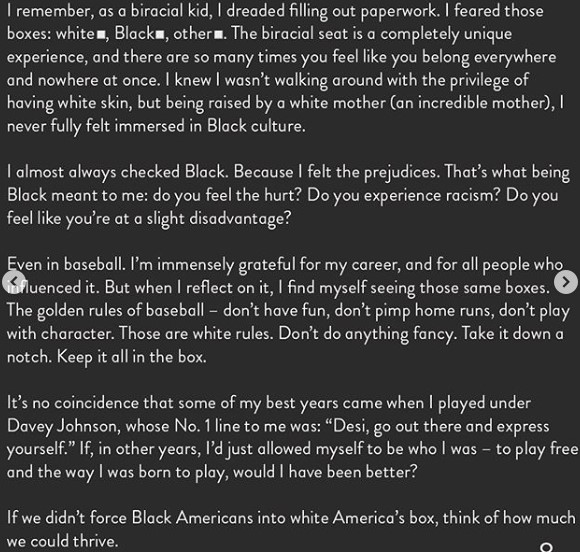 That is part of the problem in the America that Ian Desmond knows. There is so much that is in black and white. Maybe that is why he wrote in white letters on a black background for added imagery. His quote that he shared from Davey Johnson was profound. “Desi, go out there and express yourself.”

“Ian’s impact on the Nationals [Youth] Academy is immeasurable and ongoing,” said Tal Alter, CEO of Washington Nationals Philanthropies. “It is the sum of everything, from counsel on strategic planning to hugs and high fives with Scholar Athletes. He is a genuine human being, and that rings true in everything he does.”

If you would like to donate on Ian’s behalf, click on this link to the Nationals Youth Baseball Academy.

Maybe Ian Desmond should think about being the Commissioner of Baseball. He is only 34-years-old. He has time to do things. He is about to have his fifth child — something else we share in common. When he is out there in his community in Sarasota, Florida, he will make an impact on his time away from the Major League fields. Desi tells his truth, and clearly by the comments on social media to his post — most got the message — some clearly did not.

We could have muddied the message here and written about Ryan Zimmerman and Joe Ross opting-out. Everyone has their own reasons for not playing or playing in a truncated season that still might not happen due to COVID-19. So far, Desmond is one of four players who won’t report to camp this week.

Desi didn’t opt-out in a metaphorical sense. His message is about change that runs the gamut. Read it a few times. George Floyd, Antwuan, Dick Lee, and Davey Johnson were all named in there. But the unnamed need voices too.

“Suppressing my emotions became impossible,” Desmond wrote on page one.

That message could have been written several times on all nine pages. Desi opted-in for change.