60-man roster and opt-outs due this afternoon! 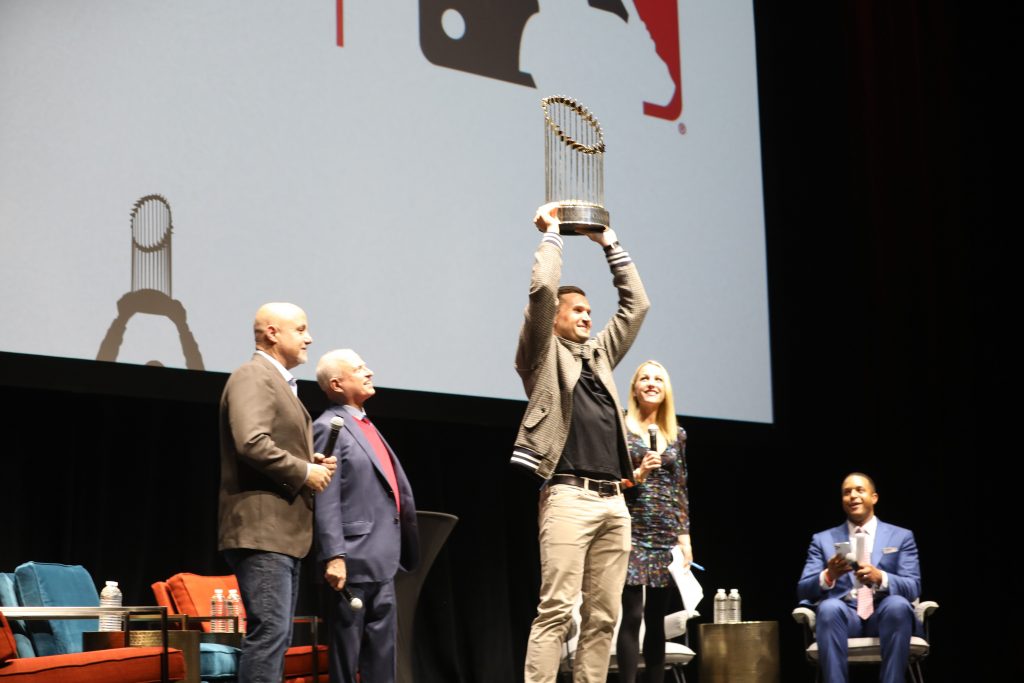 With the 60-man player pool rosters due by 4 p.m. ET today, teams will all have some surprises on their rosters. The hope is that no team will need 60 players to get through a 60-game regular season. But there is the contingency plan in place if there is a large scale COVID breakout that a team could literally put that entire active roster and coaches into seclusion for 14-days and bring in a new active roster. In reality, a large breakout could K.O. the remainder of this “season” or whatever a 60-game schedule is called.

When the regular season starts, the 30 non-active players will remain at an Alternate Training Site, which we believe the Nationals will be using the brand new Fredericksburg Nats stadium in Fredericksburg, Virginia. Teams must also provide a list of which of those 60 players will be invited to the Major League training camp to be held at Nationals Park starting on Friday. Summer Camp will split up the players and it really is about having effective scrimmages. The players from the 60-man pool who do not go to the Major League camp will go to Fredericksburg as their Alternate Training Site for their workouts.

The active rosters will decrease to 28 players then 26 players at the 15 day and 29 day marks respectively into this truncated season. Teams will also then carry a 3-man taxi squad for road trips. At the 29-day mark in the regular season, the teams will have 29 players traveling for the rest of the season with the taxi squad players and 31-players at the Alternate Training Site.

All of that is in the perfect world if nobody gets sick, seriously injured, goes on leave, retires, gets DFA’d or traded. Yes, trades can happen up until the new trade deadline on August 31. Teams could also have players with opt-out clauses from those non-roster statuses. Players with opt-out clauses can request to be released — but any player who has used their opt-out or is DFA’d may not be added back to the team’s Player Pool for the remainder of the 2020 season.

One further complication is medical and voluntary opt-outs. Players with pre-existing health conditions can opt-out at full pay for the 2020 season plus service time. There are no expectations that the Nationals will have a player in that category which leads to players can just opt-out and not get paid or receive service time. We know this has been a difficult subject because reportedly Nats relief pitcher Sean Doolitte’s wife, Eireann Dolan, suffers from asthma and COVID-19 would put her at a higher risk.

Then there is Ryan Zimmerman who has a newborn at home. Money should not be a factor for Zim who will make a 2020 prorated salary of $740,740.74. In his career, he has earned well in excess of $130 million so doing a walk0ff away from a sum that is less than 1% of his total earnings is easy to do. This has to be a personal decision.

“I’m still deciding whether to play,” Zimmerman said earlier this week to the AP. “When it comes down to it, it’s a decision not just for me, but for my family as well. I have a 3-week-old baby. My mother has multiple sclerosis and is super high-risk; if I end up playing, I can pretty much throw out the idea of seeing her until weeks after the season is over.”

While the situation with a newborn, toddler, young children, and others in the household is at risk any time we venture out and come back home, there are health protocols in place to minimize risk. As far as visiting an elderly parent, you should only be doing that using social distancing and following the strictest guidelines set by the CDC. That should not change whether you are playing baseball or not.

Will there been any surprise opt-outs today? We will see. There are players with known pre-existing health conditions like Kenley Jansen. Reportedly, Rockies star player Charlie Blackmon contracted COVID-19. But what about the heart issues of our own Nats manager Dave Martinez? Nobody is talking about his situation. He might be taking the biggest risk of all given his age of 56 in September.

These are scary times and if players and personnel are not vigilant about COVID-19, this whole idea of playing baseball in the shadows of COVID could have some disastrous results. That really is the big story here. This game will not be played within a bubble and no plan is foolproof.

Could the Nats 60-man player pool have some surprises on it? Sure. We might see some top prospects on there especially some relievers who could use this time to develop like Matt Cronin and maybe even a pitcher who was just drafted like Holden Powell. Team can use this 60-man roster to work on the development of some of their top prospects.

Maybe the most exciting thing we have heard is that the Nationals and Yankees will square off in Washington D.C. for a national audience in an early start to Opening Day. According to Joel Sherman and Andrew Marchand of the New York Post, they reported that New York will travel to D.C. to take on the defending World Series champions. According to reports, that game would be one of only two games played on July 23 to kick off the season. You would expect that Opening Day game to feature new Yankees starter Gerrit Cole against either Max Scherzer or Stephen Strasburg. The last time we saw Cole, he was warming up over several innings during Game 7 of the World Series and never entered the game.

What you are saying is Cole is still warming up in the bullpen ready to come in vs the Nats? He should be loose by now! @Joelsherman1

We will update as we have more information on the rosters.

Several Nats top prospects made the 60-man including Carter Kieboom who we expected then there was Matt Cronin as we thought and additionally there were top prospect pitchers Tim Cate, Seth Romero, Jackson Rutledge.

For now, Ryan Zimmerman and Sean Doolittle are committed and did not opt-out, but there is always the possibility they ask that a familial issue arises and a player is removed. 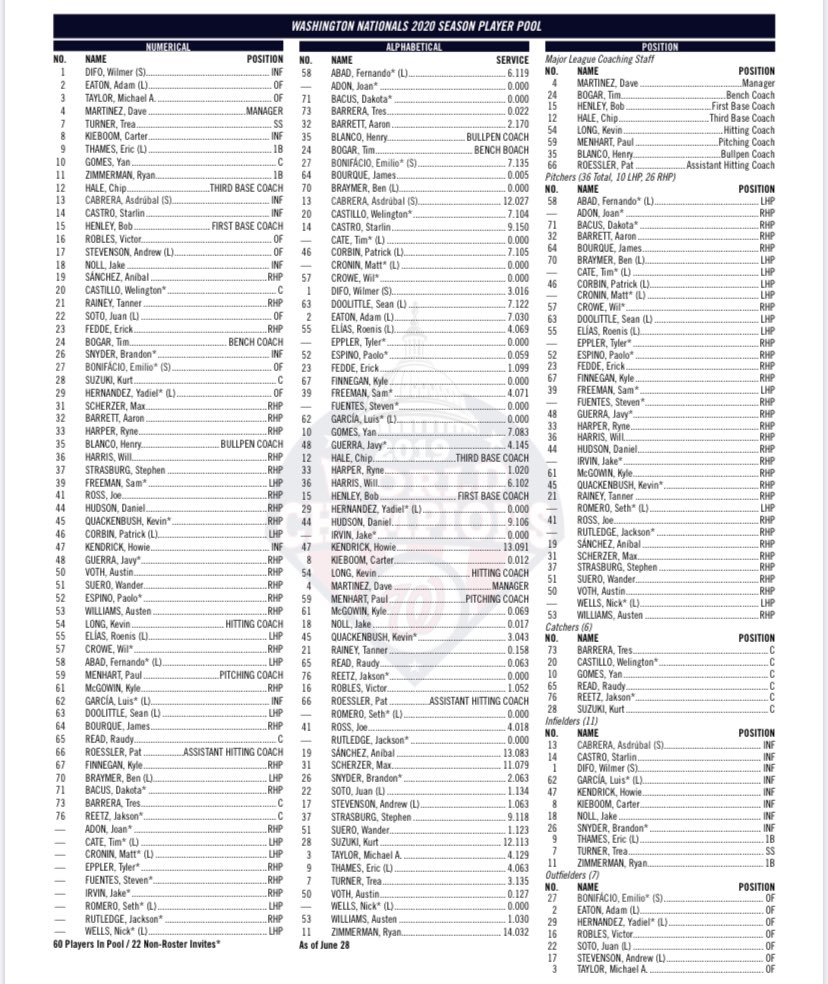 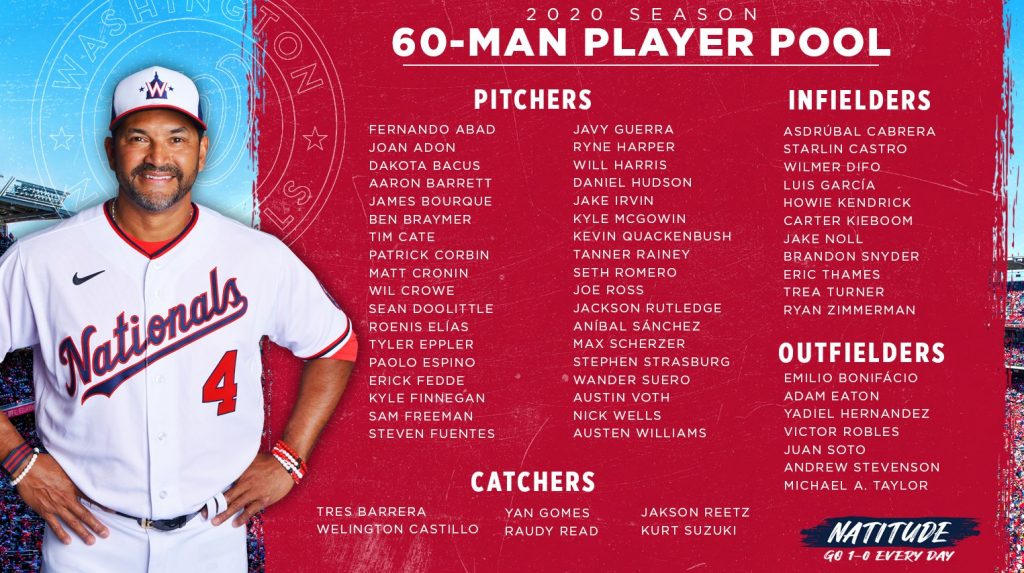