Photographs & Memories of Father’s Day weekends at the ballpark! 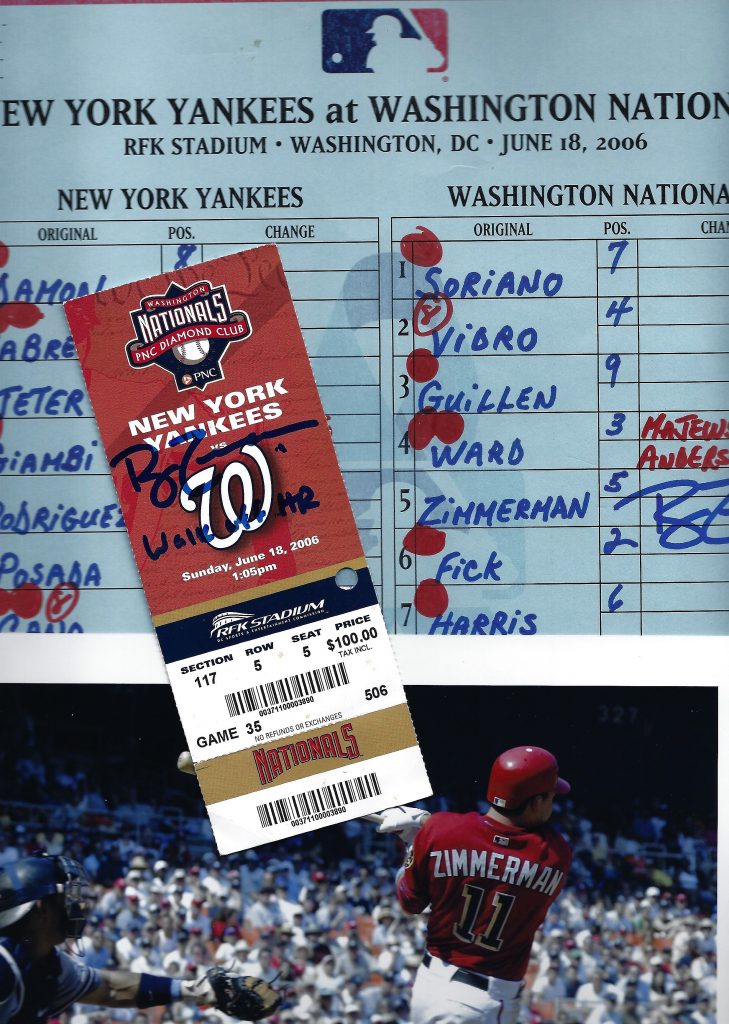 For as long as I can remember growing up, Father’s Day was a special day with grandfathers, and my dad. There was usually a barbecue with dad having a spatula in-hand flipping burgers over the hot coals. Besides his birthday, Father’s Day was a special day for the man of the house. When I became a dad in 1986, there was no MLB team in Washington, D.C. and I looked forward to the days my own kids would play the game that I loved as a kid. Baseball. What could be better than combining Father’s Day and baseball.

When the MLB schedule came out in the Nationals second season in existence in 2006, there was the Father’s Day game against the New York Yankees. I circled it on my calendar. My 13-year-old was on a baseball travel team, and I had to hope that we had no game on that Sunday. Our schedule maker would ask in January if any families had a scheduling conflict, and I said, “Just one on June 18th.” We got that rare weekend day-off on the travel schedule, and I just had to hope for good weather which Mother Nature delivered. The weekend series against the Yankees had 44,700+ for each game and plenty of Yankees fans in attendance. The crowd was energized all weekend.

Juxtapose the last time the Yankees played in RFK Stadium, it was Thursday, September 30, 1971 and the attendance was just 14,460 of mostly Senators fans looking to cause havoc because owner Robert Short was moving the team to Texas. With the Senators winning 7-5 with 2 outs in the 9th inning, hundreds of fans stormed the field and the Nats forfeited the win allowing the Yankees to have a winning season at 82-80. For many of us, we thought that would be the last time we would ever see baseball in RFK Stadium and possibly ever in Washington, D.C.

In the first game of that Yankees series in 2006, the Bronx Bombers couldn’t do much off of starter Shawn Hill, but they connected off of the bullpen as Gary Majewski and Chad Cordero gave up runs, and it was Mariano Rivera who got the win for the Yankees. On the second game of the series on Saturday, it was a shootout with 20-runs scored, and the Nats took the game 11-9. The rubber game was on Father’s Day. It was Chien Ming-Wang against Mike O’Connor. Wang was 7-2 at the time, and the Yanks were big favorites.

Their starting lineup was Johnny Damon CF, Melky Cabrera LF, Derek Jeter SS, Jason Giambi 1B, Alex Rodriguez 3B, Jorge Posada C, Robinson Cano 2B, and Bernie Williams RF batting eighth. That lineup looked like something out of an All-Star game long before Melky, Giambi, ARod, and Cano tarnished their names around PEDs. Kind of amazing when you think about half of that lineup was later disgraced by PED allegations and/or positive tests. The Nats lineup had former Yankees star Alfonso Soriano LF in his 40-40-40 record season leading off, Jose Vidro 2B, Jose Guillen RF, Daryle Ward 1B, rookie Ryan Zimmerman 3B, Robert Fick C, Brendan Harris SS, and Marlon Byrd CF.

That 2006 season with the Nats was special with Zimmerman’s rookie season and Soriano breaking records as the first 40-40-40 man in history. But who expected that Mariano Rivera would be unavailable and Chien Ming-Wang would attempt a complete game. O’Connor pitched the game of his career considering the lineup he had to traverse through. He gave up 1 run in 7.0 innings and Majewski relieved him to give up a run and Wang took a 2-1 lead into the bottom of the 9th inning. If he had Mariano, you figure the Nats lose, but Wang was tiring and the Nats took advantage to get Zimmerman up with one on and the improbable chance to walk-off with a home run — and Zim delivered with a no-doubter off of the back wall in RFK’s cavernous outfield.

The home run by Zim came on a Wang sinker that didn’t sink. They call those stinkers, and fatigue or over-throwing that two-seamer can cause it to do nothing — and the rookie didn’t miss it. He crushed it for the first walk-off of his illustrious career. I got to celebrate that at my first Nationals Father’s Day game with my three oldest sons. It was special. We took some photographs afterwards. Later, I would set that moment in artwork to remember that moment as Zim’s teammates celebrated at homeplate and the Bronx Bombers last time in RFK Stadium would be the walk of shame. In a twist, if Wang won that game, he goes 20-5 and maybe wins the Cy Young instead of being the runner-up.

On Father’s Day weekend of 2015, who knew that on Saturday, June 20th — it would be one of the most iconic days of Max Scherzer‘s career, but also for his catcher, Wilson Ramos. It was Scherzer’s first season with the Nats, and the game sold-out. Before the season started, we chose that day for a camp from morning to early afternoon with Wilson Ramos. The game that day was scheduled for 4:05 pm and Ramos had to be there at 11:30 am but got permission to show up later. He caught the Friday night game and did not think he was going to play that day.

Ramos went from a full morning at the camp that was held at Georgetown University to the ballpark and found out he was going to catch Scherzer. They would game plan similar to the win the night before with Joe Ross on the mound who was brilliant over 7 1/3 innings of 1-run baseball in a tidy 4-1 win.

Of course Scherzer had his A-game and had a perfect game going on this day. I kind of had a feeling this would be a special day. I caught this photo of Max and Ramos warming up. 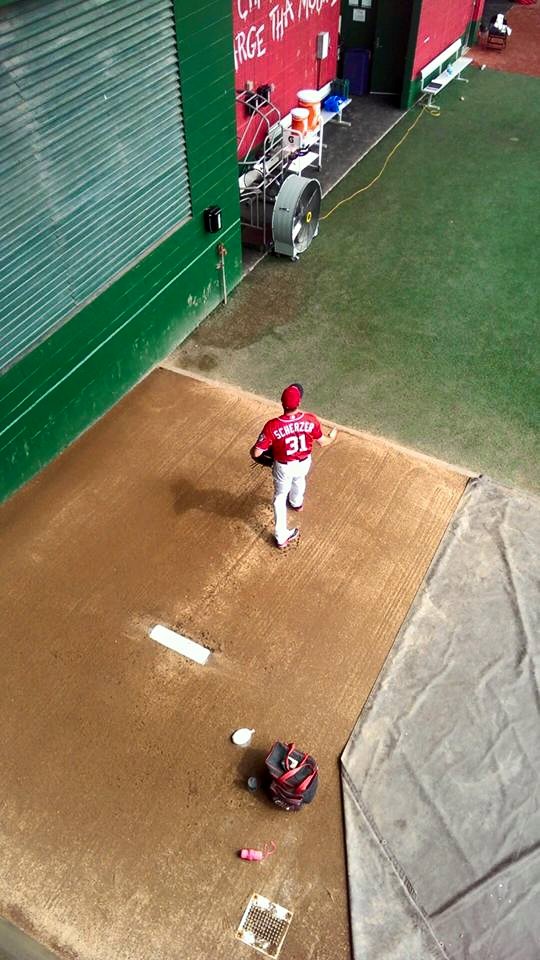 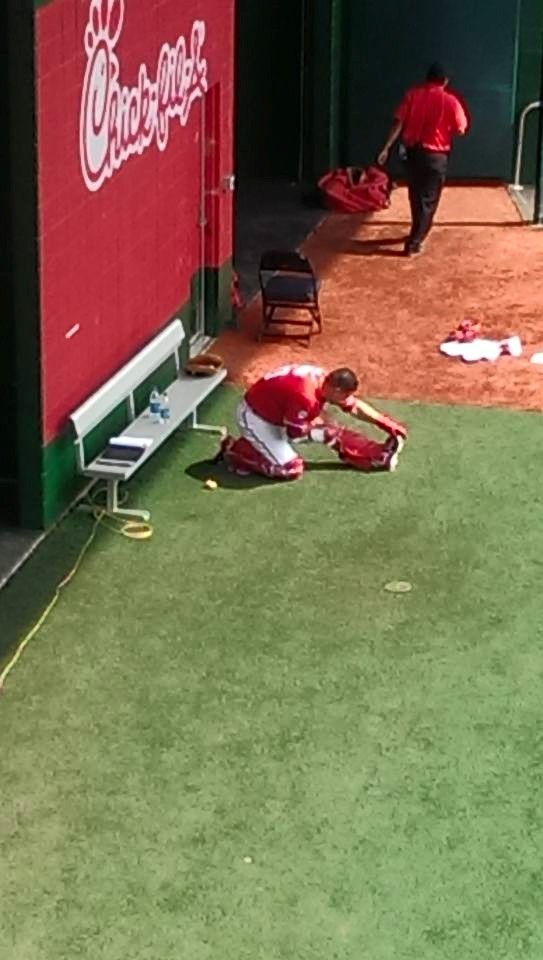 Scherzer’s perfect game ended in the 9th inning with 2 outs as pinch-hitter Jose Tabata kind of leaned into a pitch in a 2-2 count. He denied Scherzeer perfection, but not the no-hitter as Max got Josh Harrison on a flyball to seal his first no-hitter. It was the second no-hitter that Wilson Ramos mastered as the man behind the plate. The “buffalo” also caught a Jordan Zimmermann no-no and of course would catch a third no-hitter which would be Scherzer’s gem in the final weekend of the 2015 season. 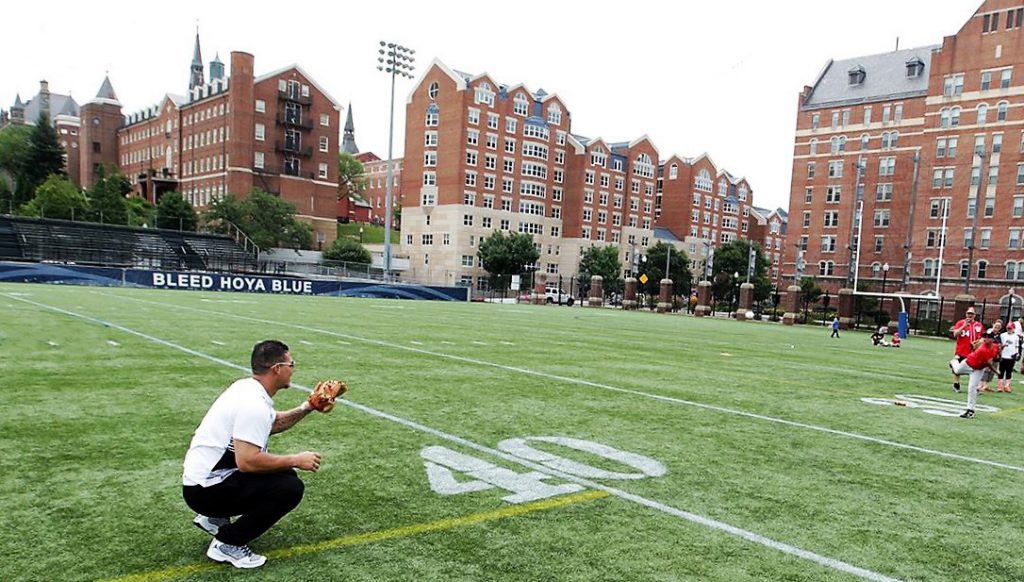 Just another great Father’s Day weekend and more great memories. You sometimes have no idea how a game will go. To witness a no-hitter in person is a rarity for sports fans. 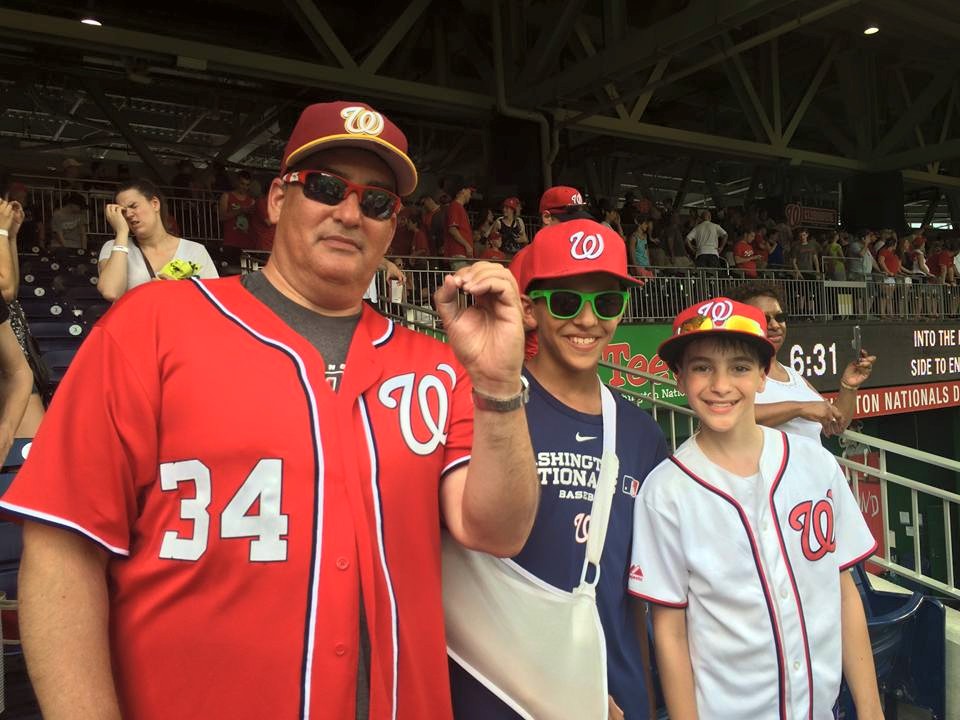 The last out was recorded in Scherzer’s first no-hitter just before 6:31 pm