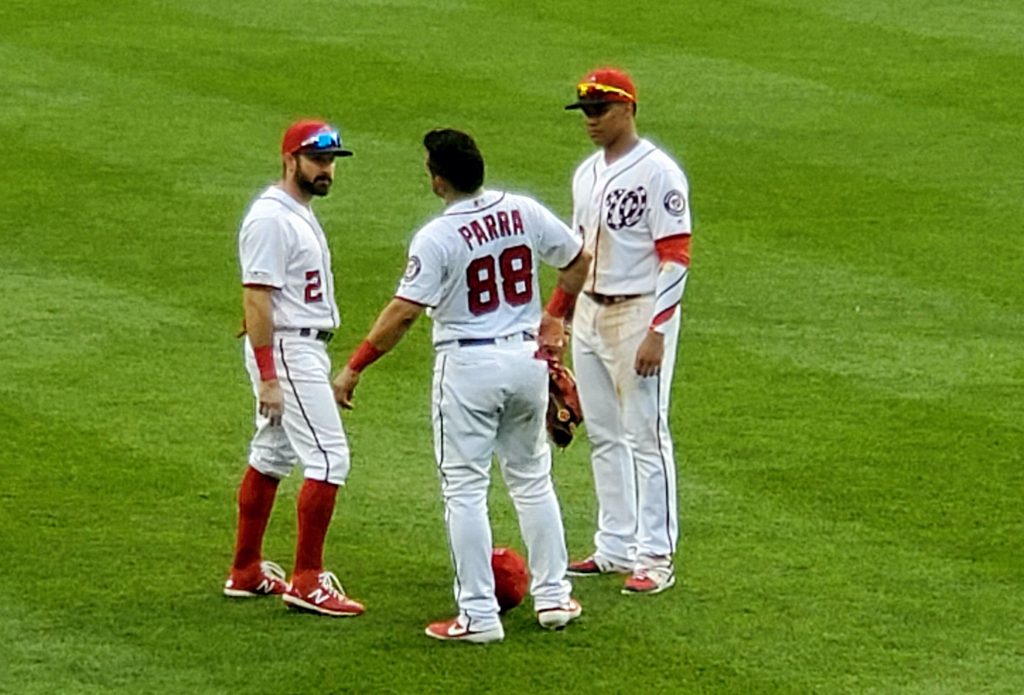 Today at 5:43 PM ET, it is officially summer in the northern hemisphere of the United States; however, the “Boys of Summer” are missing. They could actually play with waivers in every MLB stadium in the U.S. But instead, the owners and players cannot agree to start the season.

Over in Japan, they had their opening day yesterday, and a familiar song played, Baby Shark, as stepped up to bat. Yes, Gerardo Parra made his NPB debut. He had an infield single and after the game smiled as his team won 3-2 while also showing off the baseball for his first hit. Parra is playing ball. And he is getting paid. Maybe he was the smart one after all. He didn’t wait around long in free agency and took a deal with the Yomiuri Giants of Japan’s Nippon Professional Baseball league for $2 million with a $500,000 incentives bonus and a $3 million vesting option for 2021.

To complicate matters, there are several players and personnel who have recently tested positive for COVID-19 at their spring training facilities. Members of the Phillies, Blue Jays and Astros who reported to have tested positive for COVID-19 have shifted the focus back on the reason why baseball was stopped in the first place. Besides Sean Doolittle and Howie Kendrick, have you seen any of your other Nats recently wearing masks? Positive test for athletes from football to golf to hockey to basketball to baseball have sprung up all over. Are they any different than the general population or is it higher recently? MLB wants to see if they can find out how it spread in Phillies camp.

The biggest name of current athletes in a positive COVID test was Ezekiel Elliott of the Dallas Cowboys and reportedly several of his teammates have also been affected. Texas is one of the states where COVID-19 cases have seen large increases. Nick Watney of the PGA Tour has also tested positive, but baseball so far has not leaked the names of the multiple Phillies players.

According to Bob Nightengale of the USA Today, all spring training camps will be shutdown and cleansed and personnel retested before they will be allowed to re-enter.

Meanwhile, the fight over money continues between MLB and the Player’s union. Yesterday, MLB communicated to the union’s Tony Clark that it will not counter the union’s proposal of a 70-game season. The union will supposedly have a vote of all members to see if they will accept Wednesday’s off of a 60-game season.

“MLB has informed the association that it will not respond to our last proposal and will not play more than 60 games,” the PA said in a statement. “Our Executive Board will convene in the near future to determine next steps. Importantly, players remain committed to getting back to work as soon as possible.”

If the MLB season was to start, there is still a question on Spring training sites as COVID-19 are skyrocketing in Arizona and Florida where all spring training homes are located. That situation is tenuous. The Nats had originally planned to head back to West Palm Beach, but have now scrapped those plans and will use Nats Park now for Summer Training.

The Nats had one isolated COVID case with a Dominican player at their Dominican complex and have taken extra precautions there.

There is a growing faction that just wants this to be over and these positive COVID tests are reason enough to just call the end to the 2020 season now.

Even if baseball comes to an agreement on a start to the 2020 season, COVID-19 has reared its ugly head on baseball in a sudden jolt of reality and reminds us that there is no guarantee that —if— there was a season that it could be played to a completion through the postseason, or played at all. This wrangling could all be for naught.

At some point health has to take the lead over money and consider a cancellation of the season as the right move.

Inspiration for this article from Dr. Tina Butera