Click here to watch Nats win #34 on June 19th on MASN via MLB.TV at 6:30 pm tonight with the rest of us. Just a quick reminder of what we are doing if this is your first time: As a group, we are going to be re-watching all 105 wins from the Nats 2019 season in chronological order at 6:30 pm each night. We will all try to sync up to the same point in the game, and this is a work in progress to maneuver to the same point in the game. Feel free to ask in the comments section where everyone is in the game so you can sync up. Many people are joining in at different points, and most people are not commenting — rather just following along.

The MLB.TV library is unlocked and free to everyone for the 2018-2019 season courtesy of MLB. This win #34 came in the 72nd game in the 2019 season, and the Nats took the a 33-38 record into this game. This is where manager Dave Martinez started preaching “Go 1-0 every game” and eventually the Nats turned a losing record into a winning record. It took the Nats until June 28th to reach a winning record and they got to 12 games above .500 on August 21st. They dug themselves a deep hole and it took much longer to dig out of it.

This was a rescheduled game after two rainouts which turned this game into the first game of a day/night doubleheader. Patrick Corbin was set to pitch this one, and Max Scherzer had the nightcap for this long day that could push the Nats to just 3-games under .500 if they swept — and spoiler alert — the Nats took care of business and won both games.

The great news was that Patrick Corbin was back! After three consecutive losses and a mind-blowing 20-runs surrendered over just 12 2/3 innings of work, Corbin dominated over 7.0 innings in this one against a division rival.

Speaking of division rivals, it was the Phillies who vowed to pay stupid money and some in the media said they would not get out-bid for Corbin in free agency leading into the 2019 season. Well, the Nationals ownership group greenlighted $140 million and bagged Corbin in a deal that was finalized by general manager Mike Rizzo in what was a surprise to many.

The #Phillies are making it clear to marquee free-agent starter Patrick Corbin that they won’t be out-bid, and teams still in the hunt for Corbin’s services realize it, too.

For Phillies fans who were convinced he was heading to them, it had to be tough to watch the lefty dominate their team.  The Phillies had been in 1st place in the NL East just a week before, and the Braves heated up and went on a run and never looked back.

“Obviously we all know who we’re playing,” manager Dave Martinez said at the time. “They’re ahead of us, and we just got to worry about tomorrow. Keep playing like we’re playing.”

From the manager to the players, they knew what their week looked like with this series against the Phillies then playing the Braves after it. Playing .500 baseball isn’t good enough when you are under .500 and this is where the Nats went on a run.

“Having two division rivals coming in, we got to protect our home turf and keep playing the baseball that we’ve been playing,” first baseman Matt Adams said. “I think everything’s clicking right now.”

In the game before this, Adams smashed two home runs yesterday for seven RBIs, and Adam Eaton had a perfect day getting on-base all five times with three hits.

“Play good baseball and not beat ourselves,” Eaton said. “If we play the brand of baseball we know how to play, and play clean, we have a good chance.”

Of course, you play the games one at a time, and it all started with Corbin. 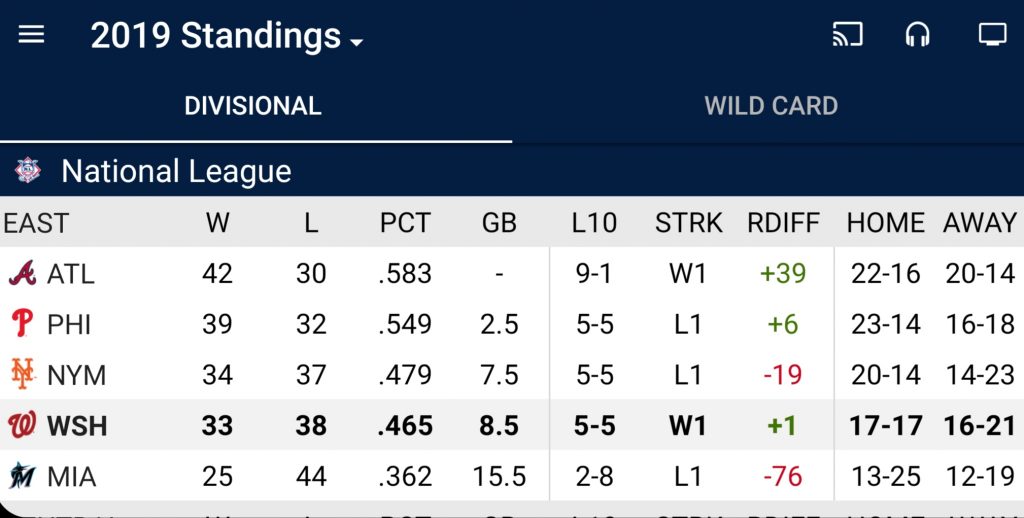 Since May 24th, this Washington Nationals team had played to a .667 winning percentage at 14-7. The breakdown of the team wins has Anibal Sanchez at 4, Max Scherzer at 3, Stephen Strasburg at 3, Erick Fedde at 2, and Kyle McGowin and Corbin have 1 each. That is the breakdown of the 14 wins. The 7 losses has 3 to Corbin, 2 to the bullpen, and 1 each to Strasburg and Fedde.

Reading these old game notes from Steve Mears is great because he was once again prophetic in his vision when he wrote on that day in June,

Well the Braves never cooled down much, but the Nats heated up and got exactly those 93 wins.

The Braves rotation of course could change if Dallas Keuchel is added to their rotation on Friday per the rumors.