The “Ring Ceremony” and the new documentary 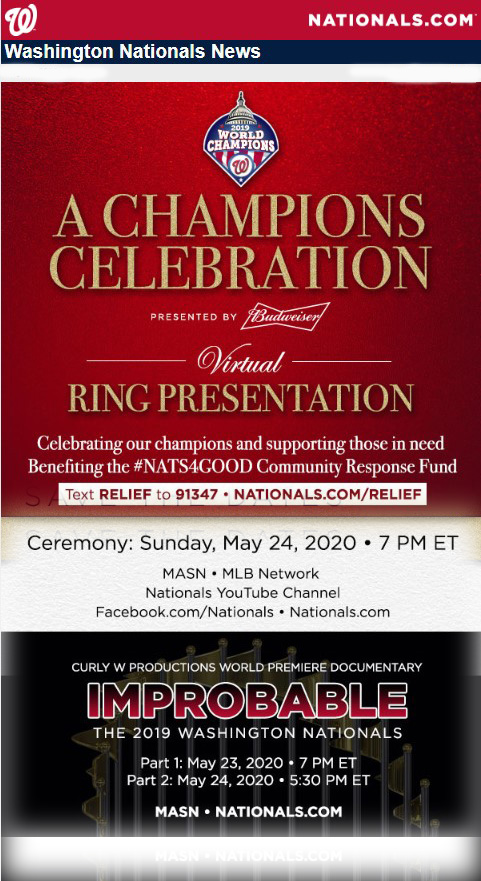 When you are handed a lemon and you’re thirsty, squeeze it into lemonade. The Nationals have decided to proverbially squeeze lemons, now that there is little hope that fans will return to Nationals Park in 2020 due to the COVID-19 crisis. In the announcement last night, as we previously suggested, the team will have a “virtual” ring ceremony featuring players and coaches on video on MASN and social media. There will also be a new documentary produced in-house titled “Improbable” that will play in two parts this weekend on Saturday at 7 p.m. EDT and on Sunday at 5:30 p.m. followed by the ring ceremony on Sunday at 7 p.m. MLB Network will also have a whole slate of Nationals programming all day on Sunday.

The plan is to pre-tape the ring ceremony the day before with players dressed up in suit and tie in order to air an edited version for Sunday. The rings are being express shipped to the players, coaches and staff and they have been told not to reveal it prematurely on social media. Unfortunately, a top-view spoiler picture of the ring was posted on a Facebook fan site and spread on the internet. We did not post the photo of the ring on social media but posted up a ring description. We did delete it after we were contacted by a VP of the Nationals and we complied. Others did not delete the ring photo and maybe that pushed this virtual ring ceremony into being or just a happy coincidence. It was smart to do this ring ceremony now in my opinion, and to link this up with the May 23rd -May 24th dates is genius. Again, accolades to Executive Vice President, Business Operations, Jake Burns, for pulling this off. Fans who tuned into the Kolko and Friends show got to listen to Burns speak and see a sneak preview of the documentary.

While Mike Rizzo vowed last month that the team would not do a ring ceremony until the fans were able to attend, the opportunity to do this for a larger audience than 44,000 at Nats Park seems like a great glass of lemonade. It was a smart pivot for the team to go this route.

“It’s great anticipation,” general manager Mike Rizzo said. “Unfortunately, we’d love to do it with 44,000 in the stands, screaming fans that belong there and helped us get to this milestone. But it’s really refreshing that we’re going to be able to really share this with so many more people through these different venues. … The whole DMV should be proud of this team, and they should share in the accolades.”

For those of us who love baseball, the glory of winning is wonderful. Having a World Series champ in your city is special. The roots of baseball goes back to most of us in our youth. In the old days, you would get some buddies together for a backyard game of hotbox. There were no crowds cheering; it was just a game we played. We can all remember things we did for fun, and maybe a glimmer of hope to be a Major Leaguer. Until then, there was no money, no ticket sales, and just for the love of the game. Unfortunately, the MLB game is now rooted in money and we are obscured by blurred lines. The love of the game is sometimes the love of the money, and it has tainted it for many fans. The Nationals, by doing a virtual ring ceremony, and not waiting for next year to get those 44,000 fans Rizzo referred to, just gave up a huge income opportunity. It was the right thing to do.

“I think it’s what you play for,” infielder Ryan Zimmerman said. “Individual accomplishments are great. Statistics are awesome. But at the end of the day, anyone will tell you that they’d trade all that to win a World Series. … That’s what you look forward to. I can’t wait to see [the ring]. I can’t wait to show it off.”

The Nationals will get their moment in a first in Major League history to get their rings and show it off on video with no fans surrounding them, and there won’t be gold jerseys this time. But the Nationals still plan on doing “Championship Weekend” when fans return to Nats Park.

“This virtual ring ceremony allows us to gather together remotely to share a moment of joy in these uncertain times,” principal owner Mark Lerner said. “We’ll be bringing fans up close and personal with the team in a way that wouldn’t be possible in a typical ring ceremony.”

To use May 23rd as the date to run Part I of “Improbable”on Saturday at 7 p.m. EDT is perfect timing. The team finished that day at 19-31 and returned from New York to D.C. with an ominous headline in the Washington Post.  For those who watched win #20 over the weekend, the Nationals were losing in that game by a score of 8-4 and had four charged errors. Even the positivity from MASN’s TV crew turned tepid. It looked like the Nationals were spiraling further into the abyss then the miracle happened. Juan Soto hit a 3-run home run in the eighth inning of that game to push the Nats ahead just like he did in the Wild Card game. Lightening struck twice. May 24th of 2019 in that 8th inning was the turning point of the season. The Nats might not have deserved to win that game given their horrific defense, pitching, and baserunning — but they never gave up — it was improbable.

“I’m proud of these guys for not quitting,” Martinez said after the May 24th win. “They could’ve folded early.”

The fact that the Nats never gave up became a recurring theme right through the last game of the World Series.

“Every time, every inning we try to fight,” Soto said after the May 24th win. “We just try to keep going because we know we’re good, so we’re going to keep going until the last out.”

Interesting words from Soto on that day. “Every inning we try to fight.” The mantra became “Stay in the fight” and “Go 1-0 everyday.” One side wins and the other side loses. The Nationals were engulfed in a five-game losing streak heading to six-games when Soto changed the team’s fortunes. The Marlins were on a six-game winning streak headed to seven games.

“If you had told me before the game we were going to get 10 runs and lose I would have said ‘hmm, probably not’,” Marlins manager Don Mattingly said. “But it was one of those nights.”

Maybe both teams’ fortunes changed on that day even though the Marlins probably were not going to go anywhere. The Nats did not look like they were going anywhere when you consider their playoff chances were less than 1% at the time. Probably. Probable. Improbable.