This book is titled Buzz Saw by Jesse Dougherty; A story of the power of positivity and of believing in yourself! 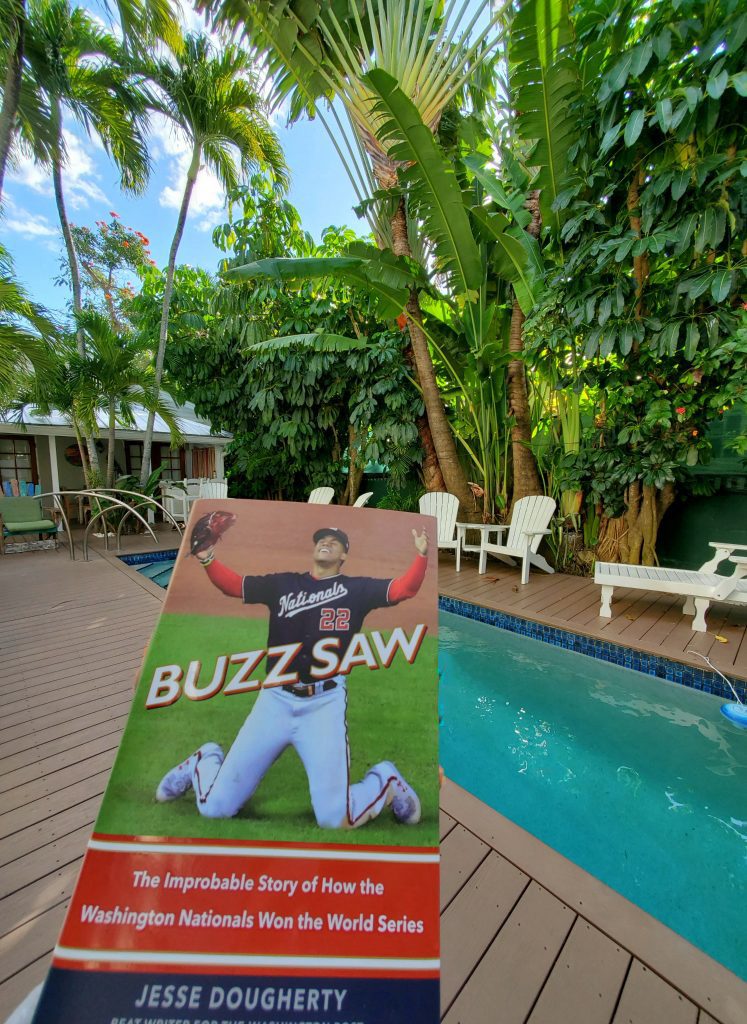 In case you haven’t heard, the Washington Nationals won the 2019 World Series, and they managed to do so against almost every odds in the books. After an abysmal start, the ball club was staring at a 19-31 record on May 23, with just a 1.5% chance of winning the World Series, and there were calls for second year manager Dave Martinez to be fired — immediately! The team faced a choice — they could either fold and go home, or stay in the fight and chase a championship. Over the next four months, the team rallied together and found a way to defy the odds on their way to a World Series title.

Washington Post beat writer, Jesse Dougherty, was entrenched with the team as they fell to the second worst record in the National League, and watched as they fought and clawed their way back from the brink. His book Buzz Saw: The Improbable Story of How the Washington Nationals Won the World Series chronicles the wild season. Starting with the courtship of prized free agent pitcher Patrick Corbin over a dinner at Fiola Mare in Georgetown and ending with the championship celebrations, and bookended by an interview with the Nationals General Manager and President of Baseball Operations, Mike Rizzo, during the 2019 winter meetings in San Diego, Buzz Saw retells the highest highs and lowest lows of the seemingly impossible championship run.

The story is ripe for the telling, and Dougherty decided to write it after the season was over.

“I didn’t really think about a book until the season ended,” Dougherty said. “I had a joke with some of the beat writers during the season. I kept saying, ‘the book starts here.’ I think the first time I said it was after Gerardo Parra hit the grand slam in LA. So it’s kind of funny now that I ended up writing a book. The reason I think the team was interesting beyond just a championship is there was always something going on. I think every championship year has its own wrinkles and quirks, but this team was uniquely odd and uniquely fun and they were always running uphill. They were limitlessly interesting in that regard, with lots of characters with compelling backstories.”

Buzz Saw, named from a quote provided by World Series MVP Stephen Strasburg, includes many never before heard anecdotes and behind the scenes stories. Throughout the book, Dougherty expertly weaves in history about the Nationals heartbreaking losses in previous postseasons and the backstories of some of the major figures on the team.

“The season was fruitful in so many ways, of course, but I really wanted Buzz Saw to be a DC baseball book more than anything,” Dougherty said.

That history is what makes the 2019 season so compelling, and what helped the Nationals turn things around in May. The team, which was the oldest in baseball, was a mix of los viejos, the veteran “old guys,” some of whom had experienced past DC heartbreak and some whom had not, and fun, expressive young guys. That team makeup, delicately crafted by Rizzo and the front office, was vital to their success.

“I think the practical answer to how they turned things around is health,” Dougherty said. “They got healthy in late May. That said, there is a more emotional, philosophical, intangible element. They were able to say ‘screw it, let’s forget about the stakes and just play.’ They were able to strike that balance of being relaxed and carefree with playing with urgency.”

That carefree attitude reminded the team that baseball is supposed to be fun.

“As rah rah as it may sound, there is a real tangible benefit to having fun,” Dougherty said.

The addition of Parra, at Martinez’s insistence, led to an important culture change within the clubhouse.

“Davey [Martinez] was a veteran of so many clubhouses, and knew the clubhouse needed that infusion of energy,” Dougherty explained. “From there, you saw such a relaxed atmosphere.”

Having not experienced the years of high expectations that had been placed on the team, or the four previous early postseason exits, Parra represented the fresh perspective that was badly needed.

“He didn’t understand why everyone was so upset or angry. He just came in and wanted to be himself. It’s hard to overstate what he did for the team from a chemistry standpoint.”

More than anything, Buzz Saw is a story of the power of positivity and of believing in yourself. It tells the tale of how a team of guys bonded together and picked each other up when needed. It demonstrates how focusing on the little things within your control helps move you towards bigger goals. It’s a story of how sports transcend the game on the field. It’s a story of hope. For these reasons, Buzz Saw will appeal not just to Nationals fans, but to baseball and sports fans in general. This non-fiction retelling of the Nationals’ World Series victory may read like a gripping baseball novel to an outsider, but every word in this book was the truth — and glued together in finely cut pages by a buzz saw. 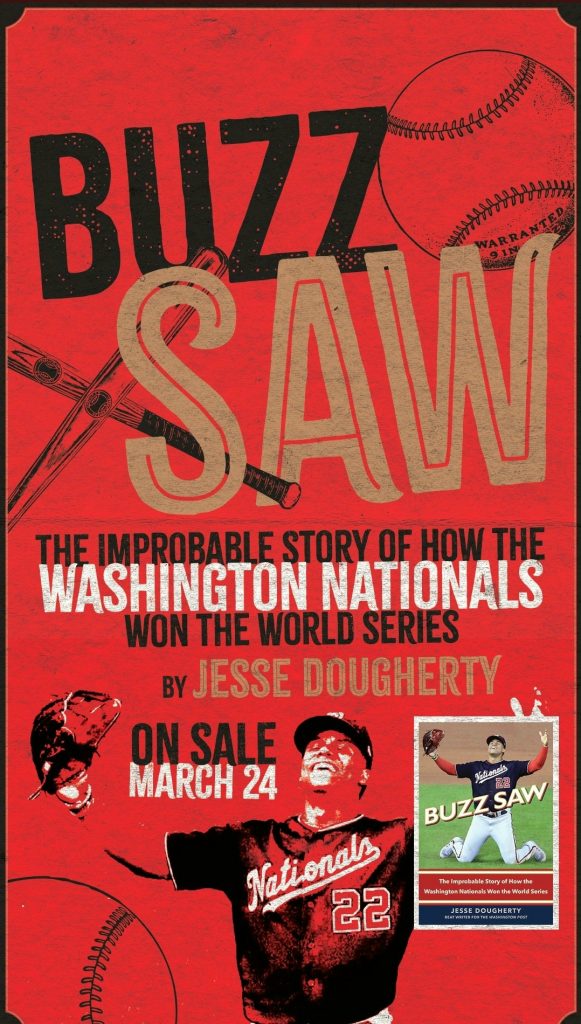 Buzz Saw, published by Simon & Schuster, is available March 24, 2020. Order online here or if you can venture out, autographed copies are available at Solid State Books at 600 H St NE, Washington, DC, 20002 by calling (202) 897-4201 and picking up your book(s) starting tomorrow CURBSIDE! Join them on Twitter Live Wednesday, 3/25 @ 7PM to hear more from the author, Jesse Dougherty, and learn more insight about his incredible book, ask questions, and connect!

We’re here! We’ve had a blast taking your phone orders and getting to see you when you pick them up!

Remember, you can always swing by and flex your browsing muscles by shopping our window. If you see something you… https://t.co/B6We3yqpDn