Game #20 Sold out! The Yankees turn for the 3 1/2 hour trek from Tampa to West Palm Beach; Corbin gets the start! 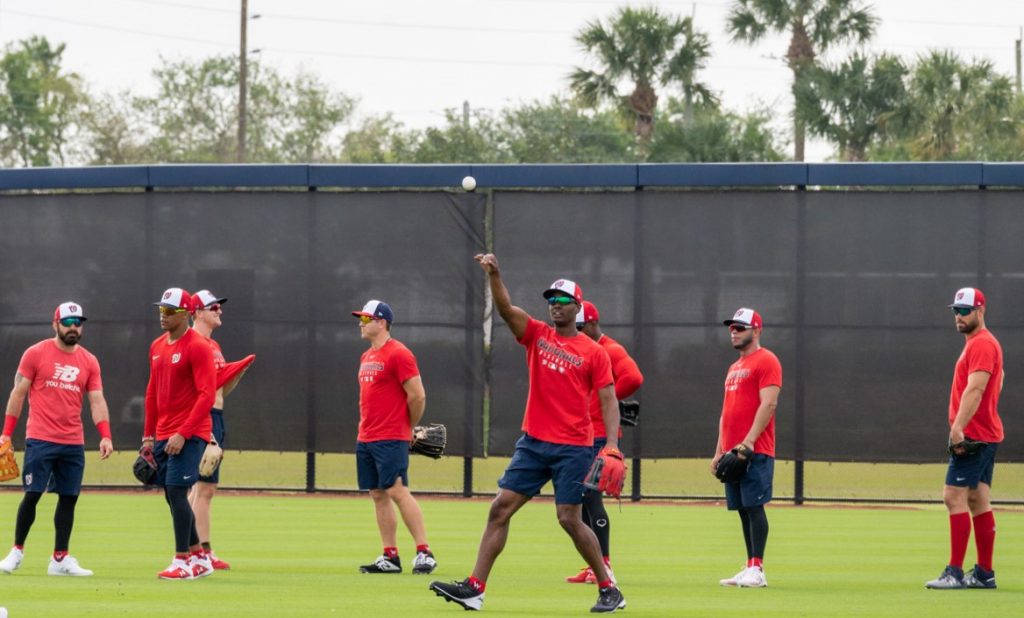 The outfielders; Photo by Craig Nedrow

It is now the Yankees turn to make the Tampa to West Palm Beach trek for an early afternoon game. The Nationals and Yankees have already played one game in Tampa and as is customary, they will play again in the other team’s stadium. According to the FITTEAM Ballpark of the Palm Beaches account on Twitter — this game is sold-out! There certainly could be empty seats due to the concerns over the Corona Virus and warnings to avoid “large gatherings” and this would be considered a large gathering.

The Nationals have Patrick Corbin starting this game, and the Yankees have the right-handed Jonathan Loaisiga who is the Nicaraguan born pitcher who has been a spot starter for the Yankees the past two seasons. This game is being televised on MASN with first pitch scheduled for 1:05 pm.

We have learned from a source that Victor Robles was feeling some discomfort in his oblique and was being reevaluated by doctors yesterday. He says he feels fine for what that is worth with three days off. Adam Eaton returned as the designated hitter (DH) yesterday as he recovered from a tight hamstring. As you also know, Max Scherzer is dealing with a sore right side which he said was just fatigue, and Will Harris is still working back from some abdominal pain, and he has yet to appear in a big league game this spring. With so many question marks it seems like there could be some openings on the roster as we are now exactly two weeks from Opening Day — if — the season begins on time. There is the distinct possibility that the start to the baseball season is in jeopardy due to the Corona Virus.

If you are looking for some good news, ESPN named their Top-100 baseball players, and the Nationals are all over the list including the Top-12 with Max Scherzer (7) and Juan Soto (11) in that group and Stephen Strasburg ranked at number sixteen. Patrick Corbin was number thirty-three, and Trea Turner at number sixty on the ESPN list. If you look at the Nats 2016 roster, you see names like Lucas Giolito who is number seventy-one, Anthony Rendon number thirteen, and Bryce Harper number twenty-five. All three of them were home grown talents. Strasburg moved up 30 slots from last year’s list while Soto jumped 24 spots to the elite level for position players. Teams with the most players in the 2020 MLB Rank were the Houston Astros (8), Los Angeles Dodgers (7), New York Yankees (7), Washington Nationals (5), Chicago Cubs (5), Minnesota Twins (5), New York Mets (5), and the San Diego Padres (5). Interestingly, if you go by the top teams in Fangraphs rankings of WAR, this is spot on for your top-3 WAR teams too in a slightly different order. The Rays and Athletics are in the Top-8 WAR teams with the Cubs (12) and Padres (14) out of that Top-8.

The last time it was #StPatricksDay, World Series champion Patrick Corbin did this…