Second (rainy) Day in West Palm Beach on Friday; There is a #Nats baseball game on Saturday night!

Posted on February 22, 2020 by ArVaFan aka Laura Peebles 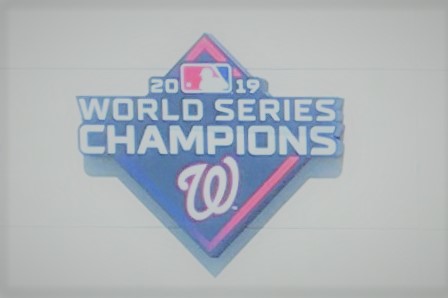 Unlike the wimpy Mets, the Nationals worked out Friday in the rain. It was also MLB Network 30-Clubs-In-30-Days at the complex and you can see the tripod setup with lighting. Here’s a shot of the glove layout beside the Nationals clubhouse. Usually we see the players eating lunch out here. 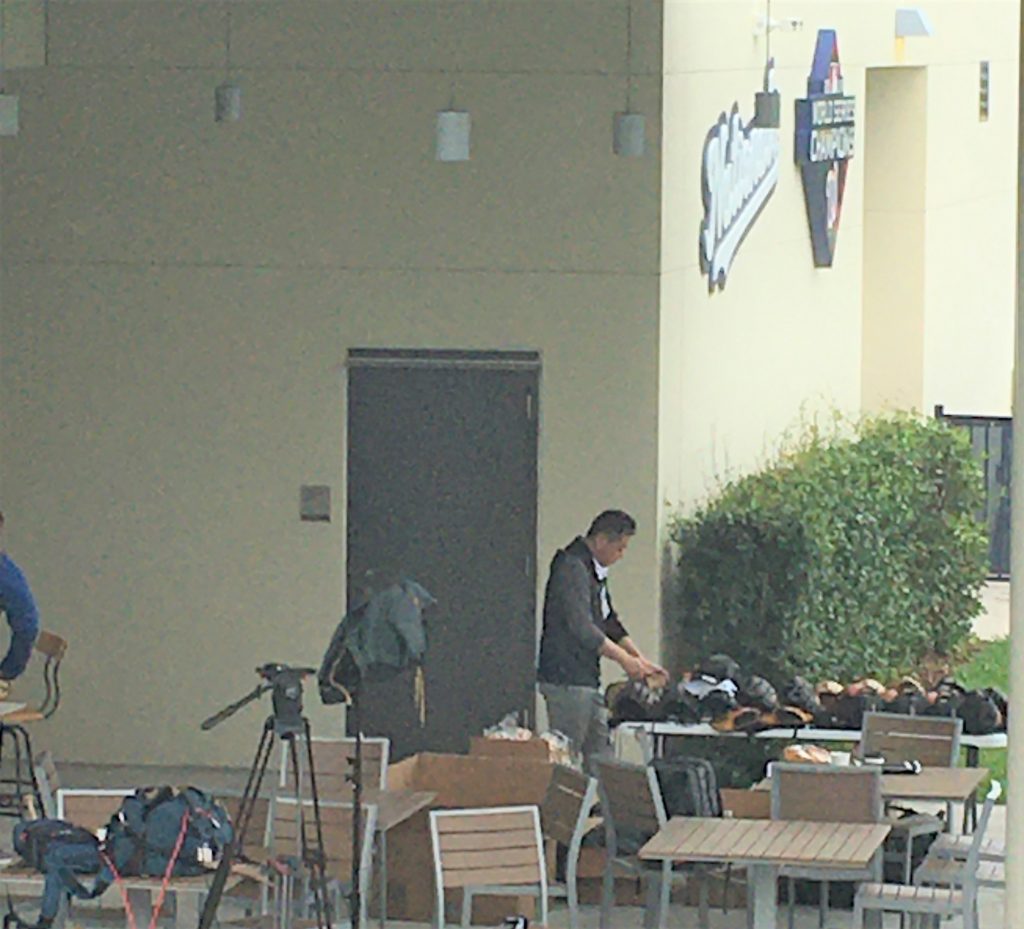 The glove manufacturers set up their annual table of glove samples

This from Jesse Doughtery of the WaPo as the official policy. Not entirely surprising to hear after the report from @ArVaFan55 https://t.co/6obJaIh3ag

I got more info on the “who gets a ring” criteria: apparently the decision point is “if your check comes from the Nationals, you get a ring.” So that’s why the ushers and groundskeepers are included, but cleaning, food service, and security would not be included (unless they are part of Nats team security). Also of note that staff personnel who are not in the front office or clubhouse or field usually do not get the same quality ring as the players but that is at ownership discretion and mentioned that other teams usually have two types of rings (still very valuable).

Here come the pitchers in their spring training whites, heading over to a field close to the clubhouse for long toss.  Yes, that’s a very happy Aaron Barrett. Got to wish him a good season. I even got a smile from Stephen Strasburg when I congratulated him. 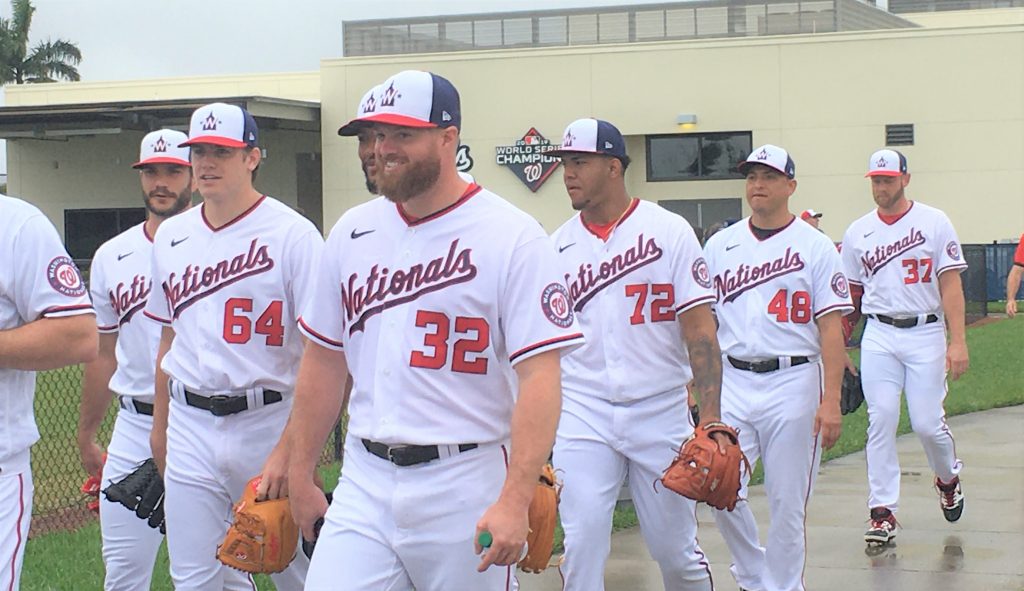 And look, here come a couple of stragglers.  Yes, that’s Max Scherzer not wearing the whites. I asked him if it was because he already got it dirty doing sliding practice.  He said “no.” Turned out that the reason he was not in uniform was because he was going to run after the long toss, which of course he didn’t want to do in uniform. To the surprise of no one, rain didn’t stop him from getting his run in. 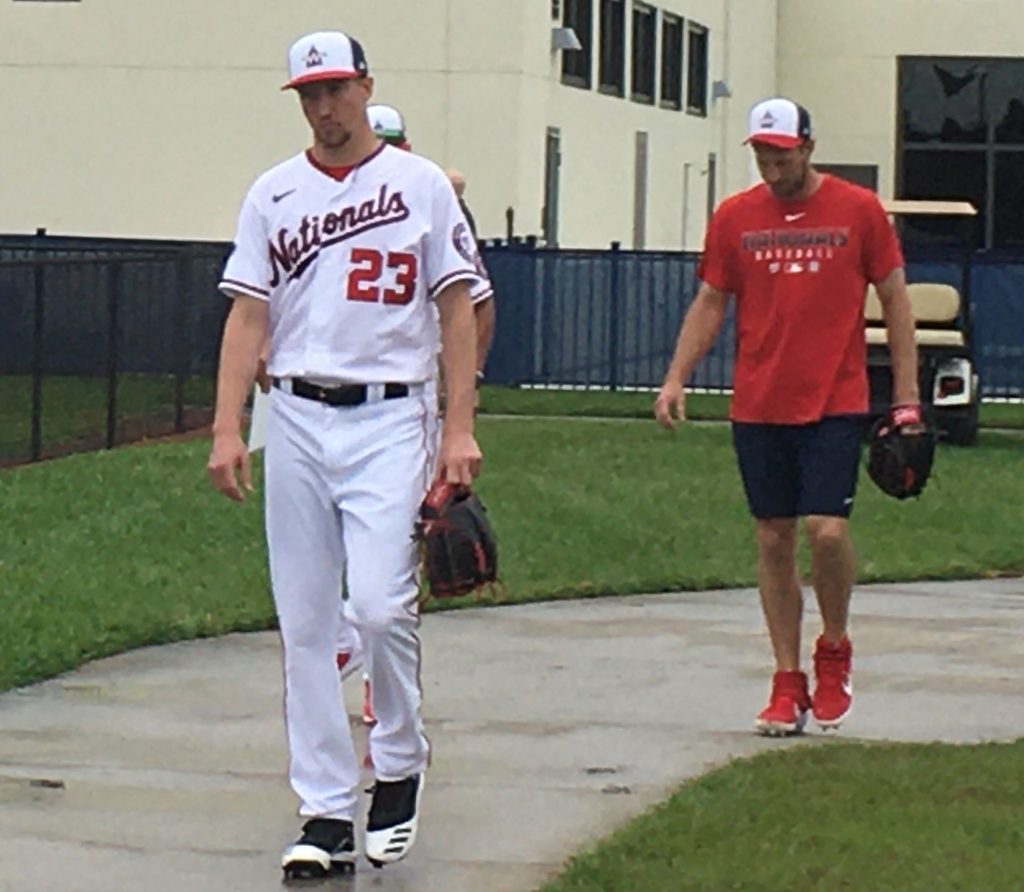 We found a place in the fence to take a few shots of long toss (almost all of that field is surrounded by black mesh as well as the usual chain link fence.) Hunter Strickland worked his way back towards us, so we had a quick chat. I had to delete the first photo I got of him since I figured I could do better than catching him adjusting his cup! When we turned to leave, there was a ball in the grass. (Spouse had just finished saying she wondered if she could ask for a ball!) Given the rain, there were no kids in the vicinity to give it to, so we could legitimately keep it. 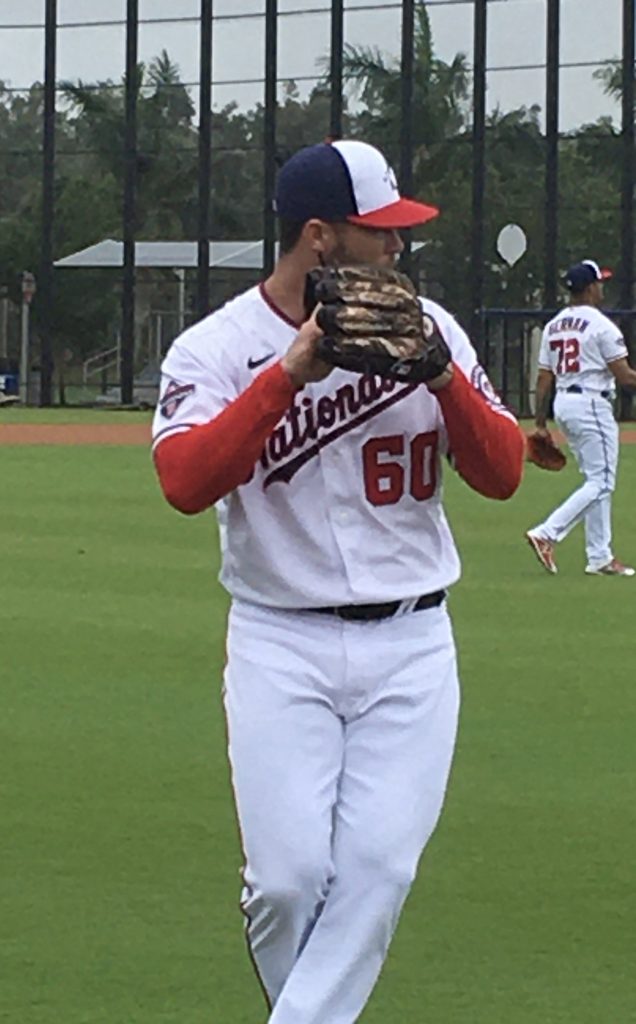 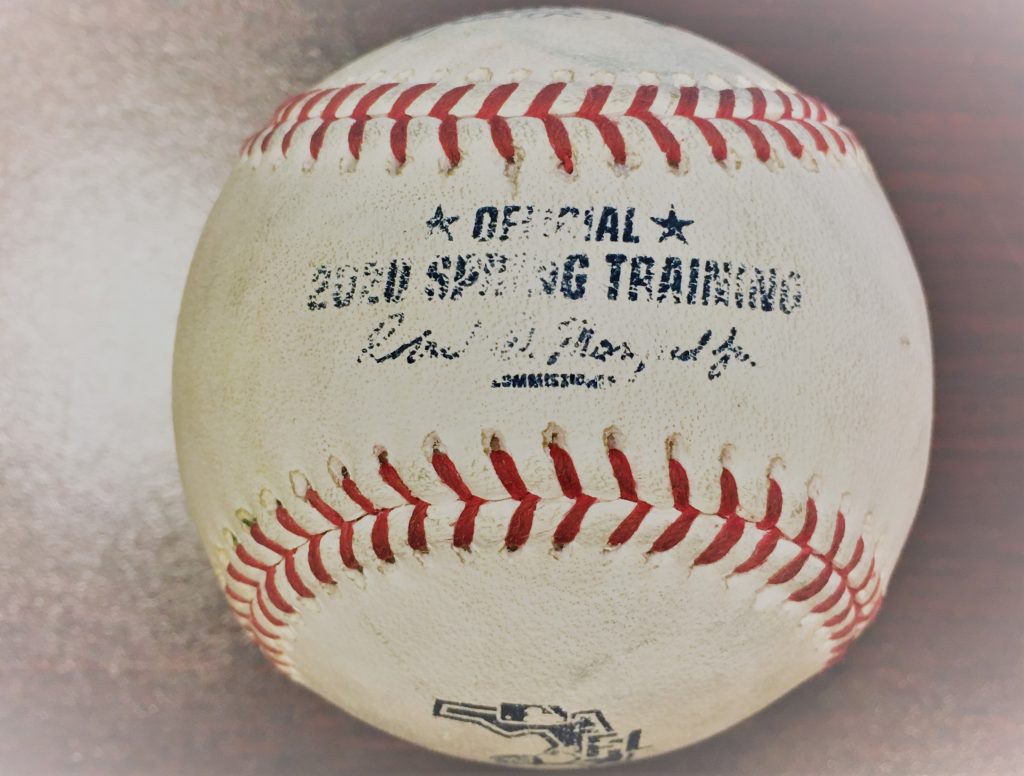 This is a used baseball from Spring Training 2020

Most of the pitchers today for live batting practice were relievers, or “second tier” (i.e. Kyle McGowin, Wander Suero, David Hernandez, Fernando Abad). They were only out there for a half-hour or so with the rain, wrapping up just after 10:30. There was a nice pop when Hernandez hit his catcher’s glove. Apparently among Chip Hale’s duties is bringing towels to the players to dry off their bats (he saw them drying them off between their legs so he went for towels). Soto changed fields so he could bat against different pitchers. Hitters seemed to be making a lot of contact off Suero (although that’s definitely a Soto swing & miss below). Don’t make anything of the contact off Suero—one, it’s early; and two, there’s always “working on something.” Kyle McGowin looks as if he needs a little more work—but then everyone does at this point. 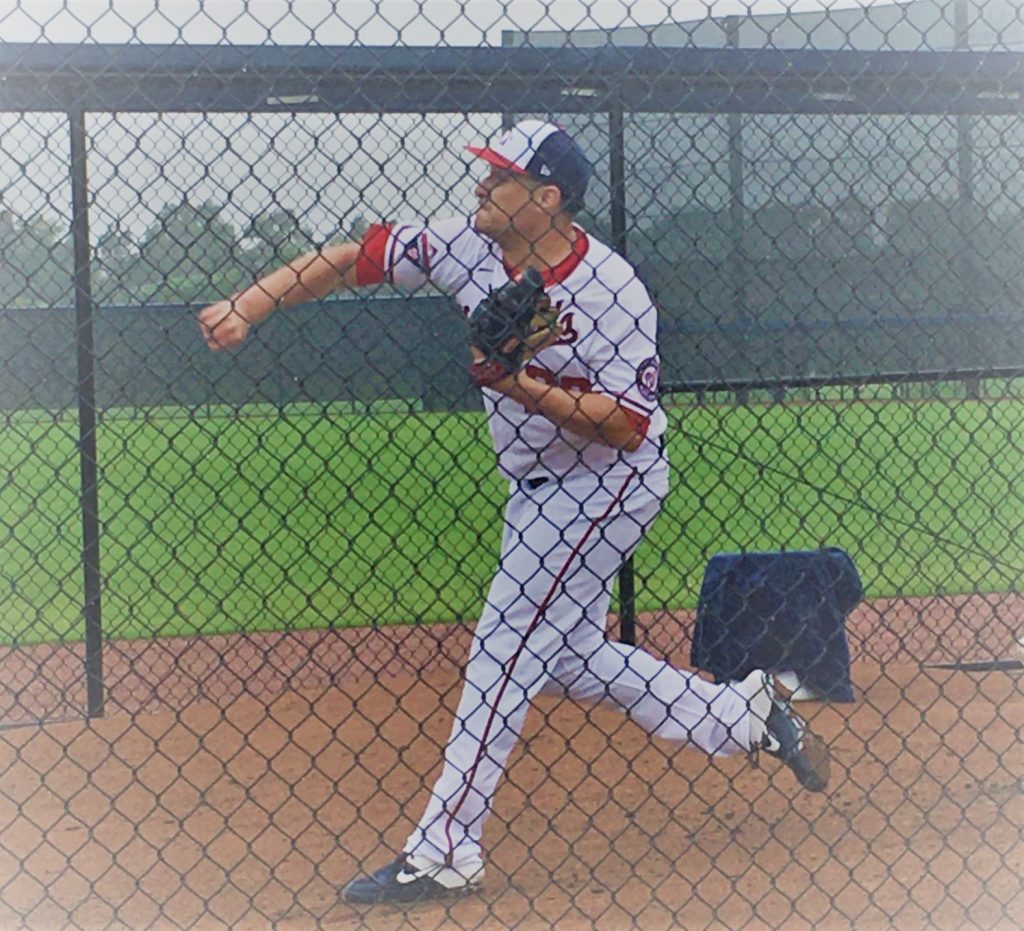 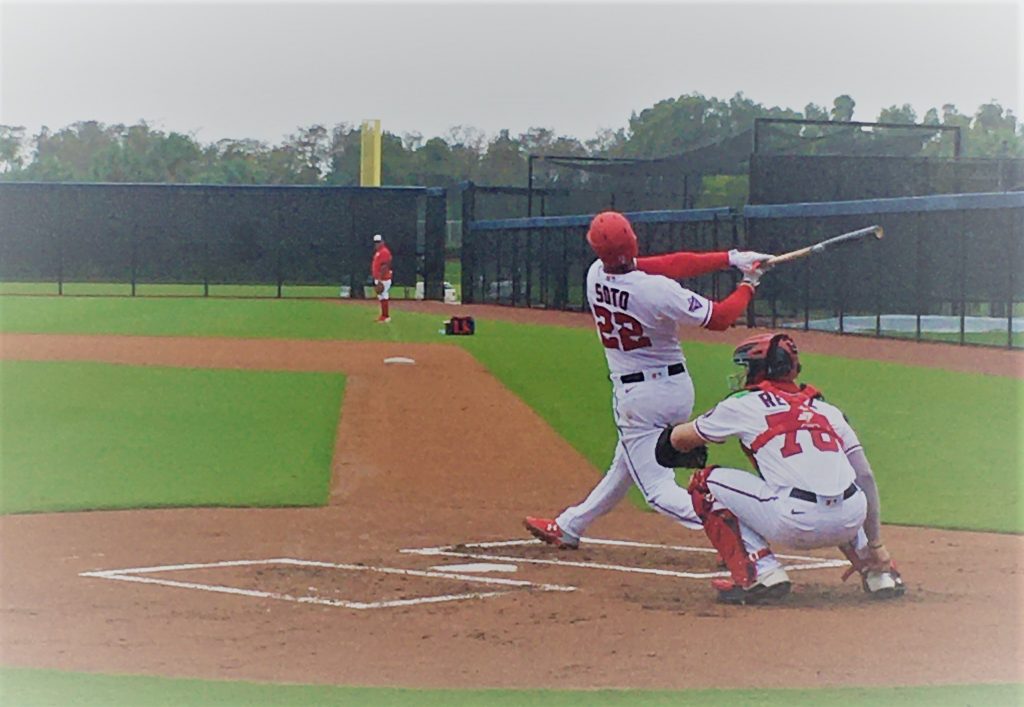 Juan Soto swinging and Jakson Reetz behind the plate

Sounds as if they’ll do some baserunning drills tomorrow before the game since they couldn’t do those today on the wet grass.

"My thinking was 'Bring the whole team back.' If it ain't broke don't fix it." — Max Scherzer

Just about everyone is back except Rendon, Dozier, Parra, Adams, and Rodney. Replaced by Starlin Castro, Eric Thames, Will Harris and at some point Carter Kieboom. https://t.co/crHPJlFuBQ