Posted on February 4, 2020 by ArVaFan aka Laura Peebles

The annual SABR day for the largest chapter of SABR (Society for American Baseball Research) had the usual array of interesting speakers. Some of their research is available on-line, so if you have a particular interest and can’t find the material, post a note below and I’ll see if I can find it.

1, The first speaker was Mark Pankin, who presented a paper on BOOT (Batting Out Of Turn). The baseball rule on this was first written down in 1876, edited several times, and finalized in its current form in 1957 as Rule 6.07. The last time a BOOT happened was in 2018, although the number of occurrences has been as high as 28 in a year. What I didn’t know is that if the problem is detected during the at-bat, the correct player goes to the plate, inherits the current count, and the game proceeds as usual—no penalty. Where things go haywire is if the error is undetected until after the player is on the bases. Typically the error happens because the manager changes something in the lineup (i.e., flipping Smith and Jones to 3rd and 4th when they’re usually 4th and 3rd, and the players bat in their habitual order). The other usual cause of BOOT is double-switches and pinch-runners getting confused. If a player is out due to a BOOT, it is scored “C unassisted.”

In the 1800’s an umpire could call a BOOT, but now, it’s the opposing manager who must call it. This does allow for some strategy. Mark had some great examples that I won’t repeat—except one. On May 28, 1969 Earl Weaver (are you surprised?) realized that the Seattle Pilots had submitted a different lineup card to the umpire than was in their dugout (Weaver had changed pitchers just before the game). Weaver waited until it was strategically better to call the BOOT . . . in the fifth inning! Retrosheet link: https://www.retrosheet.org/boxesetc/1969/B05280SE11969.htm .

3. Jesse Dougherty, a current Nationals beat writer, talked about covering the Nationals. (Commercial detour: his book, Buzzsaw, comes out on March 24). The worst part about covering the 2019 Nats was the bullpen, the cause of many re-writes! There were times, including Game Seven, where he literally had two stories (a win and a loss) written at the same time so he could hit “send” ASAP after the game. His perspective on when he realized “maybe this team is special” was when the Nationals swept the Cubs at Wrigley despite having flown in from Pittsburgh after a night game to play a Wrigley day game.

His typical day: 9-2 is “his time” for gym and relaxation. 3-4:30 or 5 is in the clubhouse to chat with players. Then it’s on the field for batting practice. 5:30 or so prepares his “notebook” on injuries, moves, etc. Then up to watch the game. Day ends about midnight. He notes that the players tend to hear about stories on social media, not read them themselves, so quotes may be taken out of context. He may have to sit down with the player and say, “here’s the story, tell me where we’re wrong.” Working with Rizzo—he’s not the “clean-cut consultant” type GM, he’s brash and competitive, but not adverse to analytics. When it got to the WS, it was difficult to get near any players due to the media scrum—he had to depend on connections developed during the season.

5. Matt Van Hoose (Nationals organist). For those who don’t know, he is a music professor at American University, mostly piano. He had always wanted to be a ballpark organist, and once he realized that Nats Park would have a live organ (only about half do), he searched for a connection to find out how to audition. Finally in 2009, a friend-of-a-friend got him a connection, and he was able to audition—and the rest is history. When he just had a keyboard, he and Danny (the audio guy for the Nats) were in the same room so they could easily coordinate their music and clips. Now, they communicate by headsets and monitors, but their time working together in the same room allows them to practically read each other’s minds. They do respond to the state of the game—maybe fewer “rah-rah” clips if the Nats are way ahead or way behind. They typically keep the windows open unless it’s really cold, but they keep the lights out to avoid attracting moths. They do occasionally pick music to tease opposing players, but never the umpires. (I think you all know about the organist who got ejected for playing Three Blind Mice after a bad call. Apparently that has happened again more recently). The MLB rule is that the music must stop when the umpire is ready to go for the at-bat, so they keep a close eye on the field.

Justin Upton almost took out the Phoenix organist with a foul ball (in many parks, the organist is on the concourse and accessible to fans during the game).

7. Chris Segal, major league umpire, gave us a lot of insights from behind the plate. He’s been in the ballpark for three of Bryce Harper’s ejections. The first one, he was at third base, for which he was very grateful, since his 72-year-old mom told him “If it had been you, I wouldn’t have been able to go to work the next day.” The second ejection was indeed him: Bryce Harper on July 26, 2017 for arguing balls and strikes, throwing his bat and kicking dirt. [Author note: I looked up the third one: he was at second on Sept. 20, 2018. BH ejected for arguing a called third strike in the 12th inning. BBREF does not have this, but Retrosheet does.]

His first replay review was in the ninth inning in a one-run game, when replay was new and so was he—three days into the season. It was a bang-bang play on Howie Kendrick. He’s standing with the headphones on, waiting for NY, and seeing the folks in the stands signaling “safe” and realized, “oh, they’re allowed to replay the video now.” NY responds: “Tell the kid he can breathe again, the play is upheld.” In response to the Trea Turner play in Game Six, he said it was correct. The rule (which, he, um, thinks might be up for a change), is an artifact of when first base was only half in fair territory. His phone blew up that minute with fellow umpires checking with each other on the call. He points out that if it hadn’t been called, there would have been protests afterwards as well on a non-call.

If he’s working the minor leagues, where he can really hear the fans, he’ll acknowledge any unique insults. (He’s not a full-time MLB umpire yet, he’s a callup ump).

As far as feedback, the Zone Evaluation System (which adjusts for the size of the player) gives them their feedback the next day. He says the tensest moment is when he loads the system and waits while it calculates his score. Once the robo-ump starts calling balls and strikes, he’ll miss the positive feedback of seeing a 98-100 rating the next day.

He hates the “you’re out if you’re 1/8 inch detached from the base for one second” rule. The problem is where do you draw the line?

“You” is definitely the red-line word for getting thrown out of a game. Although he’s never been in the room for a pre-playoff or WS game discussion, he suspects that the discussion is similar to the College World Series: the players get a little more latitude to blow off steam without getting ejected in the postseason (i.e. Robles).

He knows that managers sometimes try to get themselves ejected to fire up the team or give a pitcher time to warm up.

9. Greg Larson presented “Clubbie: A Minor League Baseball Memoir”, about his time with the Aberdeen Iron Birds. His book comes out next year from the University of Nebraska Press [Author note: I’m definitely buying this one. Maybe two so I can donate one to the raffle next year.] He is “maybe” on the reduction in minor league teams: his feelings, echoed by some players, is that perhaps some teams who don’t maintain their facilities or treat their players well really should go away. 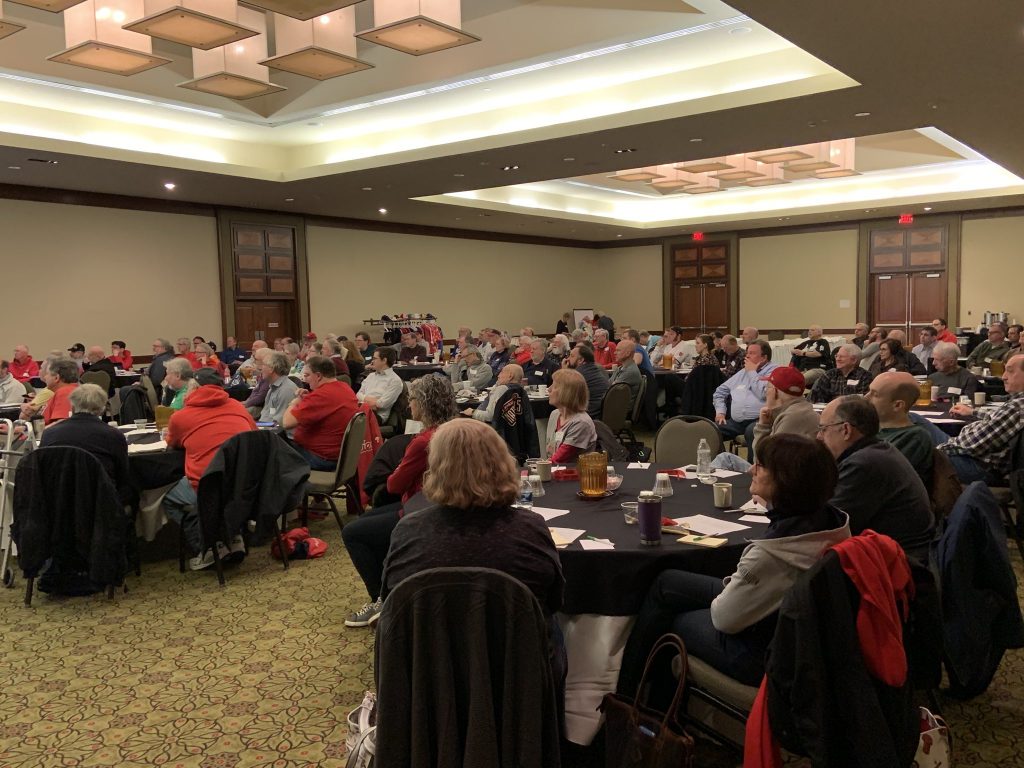 This entry was posted in Feature, Sabermetrics. Bookmark the permalink.
← Previous Article | Next Article →