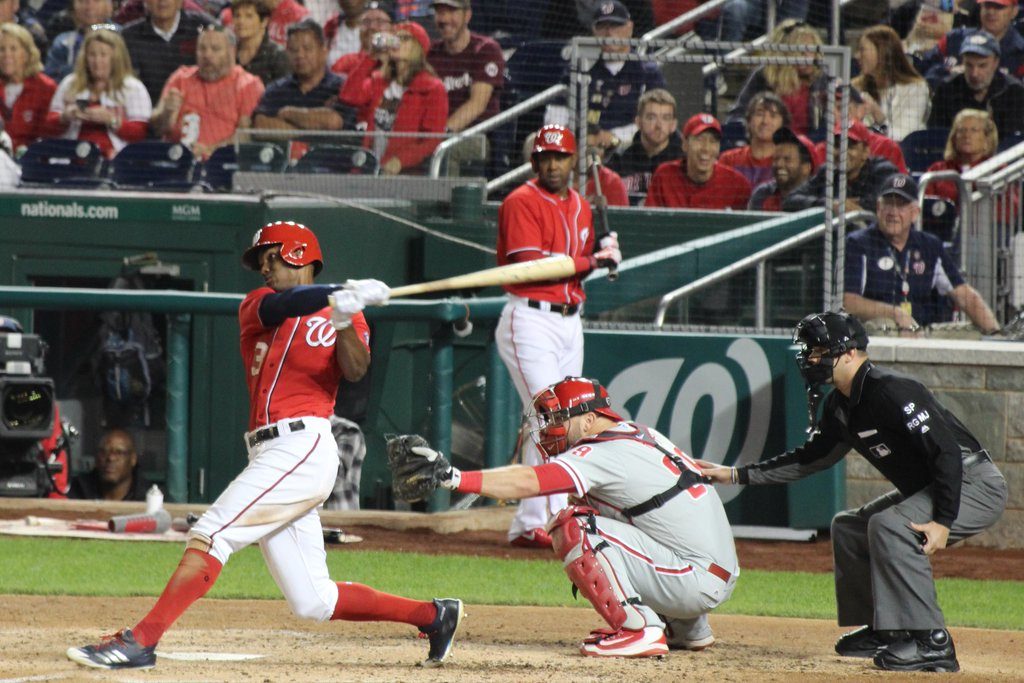 The first business day in December is an important day for arbitration-eligible players. By the 8:00 pm deadline tonight, all of general manager Mike Rizzo’s initial decisions with the team’s eight arbitration-eligible players were decided. Technically, Koda Glover was non-tendered but he also announced his retirement on social media. One of the good guys, Javy Guerra, was also non-tendered. The Washington Nationals had some tough decisions to make. General manager Mike Rizzo had already negotiated a 1-year non-guaranteed deal for Wilmer Difo like he did last year for Sammy Solis last year, and he also completed a one-year $1.6 million incentive-laden deal for Hunter Strickland.  If Difo and/or Strickland are cut before the first 16 days from the start of Spring Training, the Nats will only have to pay them a severance fee equal to 1/6th of their reported based deals. On Difo’s reported $1 million deal, he would be due a fee of $166,666.67 if cut before the March deadline. If the Nats retain Difo, a source has told us that they plan to use him as a super utility player where he could play both infield and outfield.

The no-brainer decisions like Trea Turner were easy, and he was tendered a deal in his second year of arbitration as a Super-Two player. The Nationals also tendered deals to starting pitcher Joe Ross, and lefty reliever Roenis Elias who the Nats traded for in July.  Hunter Strickland got his deal even though he was not effective for the Nationals (1.33 WHIP) during his two months with the Nats to finish the 2019 season and during the postseason he had a 2.500 WHIP and an 18.00 ERA. Strickland did not make the NLCS or World Series roster, however he remained with the team during the entire postseason.

The big shocker of the day was Michael A. Taylor was tendered a contract without negotiating a one-year deal. The team has time to workout a deal with Taylor, but there could be other motivations for Rizzo in regards to Taylor. He earned $3.25 million last year and could possibly earn close to $3.75 million in arbitration and maybe even more. He made the postseason roster after a strong finish to his 2019 season with the Nationals but overall he finished with a dismal .669 OPS and spent a big chunk of the 2019 season in the Minor Leagues after a demotion. Taylor had a big home run in the World Series, but he also had some good at-bats in the NLCS which always leads to the question on which Michael Taylor will show up the following year. The Nats lived that in excruciating disappointment in 2018 after his huge postseason in 2017.

Since Ross, Erick Fedde, and Austin Voth do not have minor league options remaining according to Roster Resource, the Nats chose to non-tender Guerra and could try to sign him to a minor league deal as they might need spots on the active roster for Ross, Fedde, and Voth with one going into the rotation and the other two into the bullpen.

Last year, Mike Rizzo took a gamble on offering arbitration to starting pitcher Tanner Roark, and was able to trade him to the Reds for reliever Tanner Rainey. This year, Rizzo could try to trade some of the aforementioned players after offering arbitration like he did with Roark. There is also the possibility that Rizzo could try to trade either Fedde or Voth since they are out of options.

Baseball’s Winter Meetings get underway in just six days in San Diego, and you can expect today’s action to be like the hors d’oeuvres before dinner is served. Yes, non-tender day is the opening salvo of action before the main event that starts this weekend.