Finding holiday gifts for Nats fans are easy this year due to the World Series win! There are so many choices from a few dollars to over $1 million.

At $17.89 you can own the official Washington Nationals 2019 World Series Edition Blu-Ray DVD documentary and narrated by NBC “Today” anchor Craig Melvin who spent years in Washington, D.C. The 2019 World Series was loaded with surprises, comebacks, superstars, and a few new records. Home field advantage belonged to the 105-win Houston Astros, who were looking to take back a title they had won in 2017. The white-hot Washington Nationals were fighting for the first championship in franchise history. The Washington Nationals beat the Houston Astros in a most unpredictable Fall Classic, winning Game 7 with one last rally in a season full of rallies. For the first time in MLB history, the road team won all seven games in the World Series.

These Nationals began their season on the brink, starting 19-31 before shifting into high gear with a baseball-best record of 74-38 down the stretch. Manager Dave Martinez battled a health scare while leading a roster balanced with experience and youthfulness that was tweaked for October by Mike Rizzo, General Manager & President of Baseball Operations. The National League Wild Card game and NLDS looked much like the regular season for the Nationals – down early, but coming back to win elimination games. Then they swept the surprising but outmatched St. Louis Cardinals in the NLCS to setup a showdown with the Astros. Willie Mays World Series MVP Stephen Strasburg, Max Scherzer, and Patrick Corbin combined to win all four games played on the road. Superstars Anthony Rendon and Juan Soto delivered crushing blows throughout the series. Big plays and even bigger hits continuously poured in from veterans Kurt Suzuki, Adam Eaton, Howie Kendrick, and Nationals first-ever draft pick Ryan Zimmerman, who helped return Major League Baseball to Washington, D.C. in 2005. Fight finished. 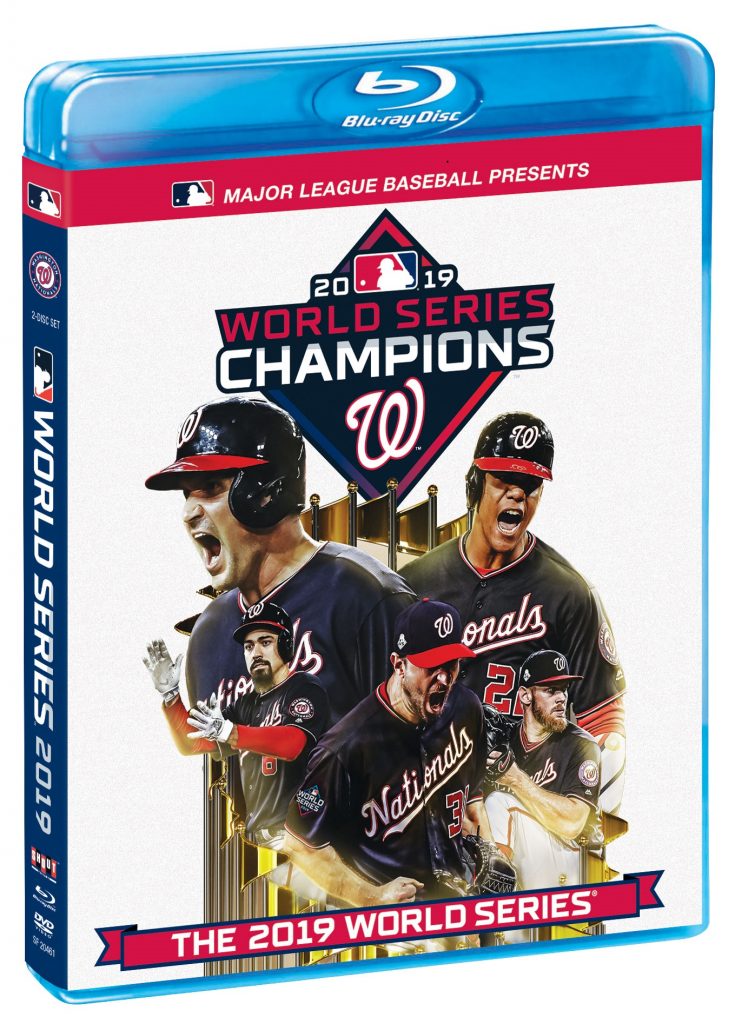 If you want the collector’s edition that has the DVDs of all 7 games of the World Series you can spend $59.99 on this link.

At FOCO who is an official MLB licensee, they have dozens of World Series items from  from $20 to $220. Here are items like a World Series sweater and a Parra shark bobblehead! 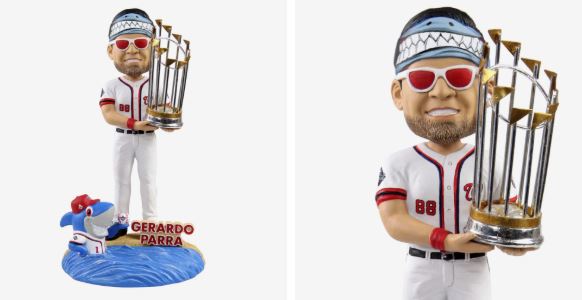 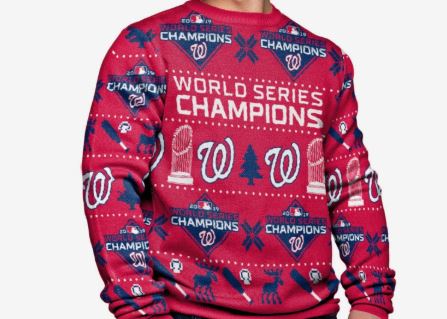 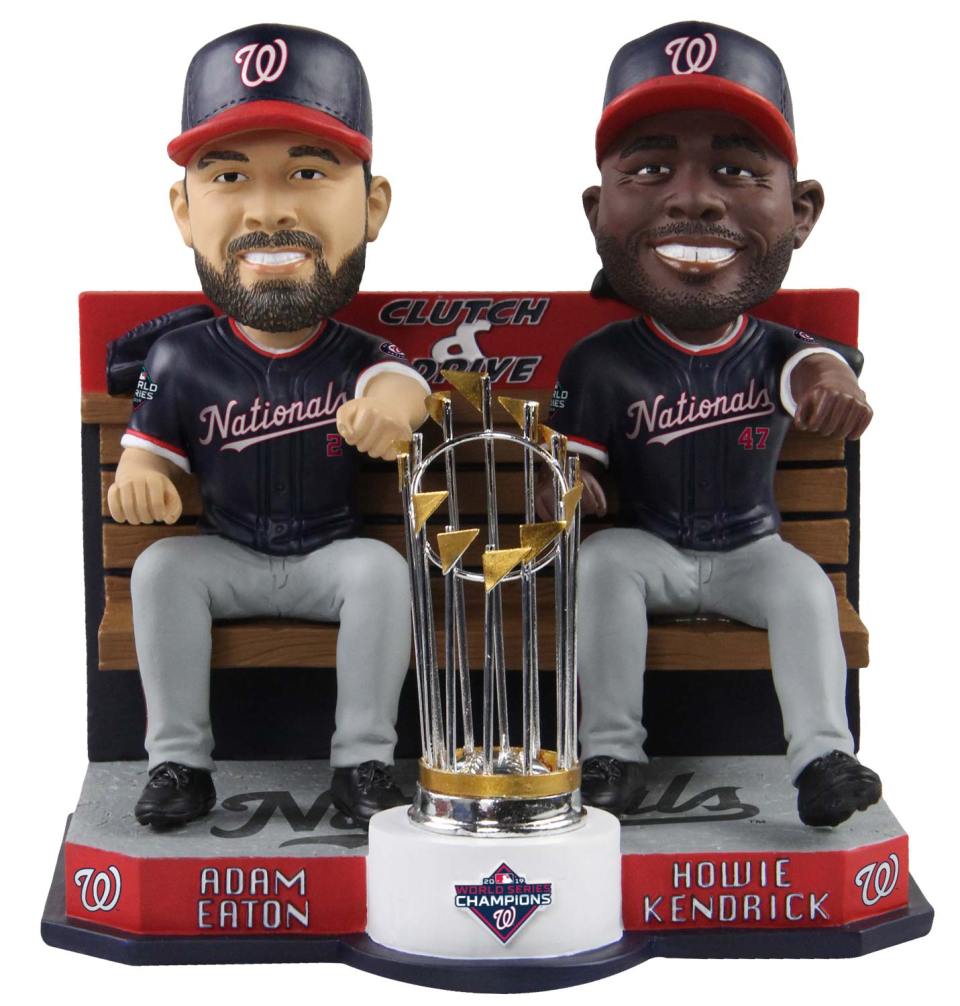 A new edition for $65 is Eaton & Howie in overdrive!

For only $20 you can get a personalized video message from Nats broadcaster F.P. Santangelo. How unique is that! The man who coined “And Now We Dance” and popularized “There Goes The No Hitter”, have fun with this! 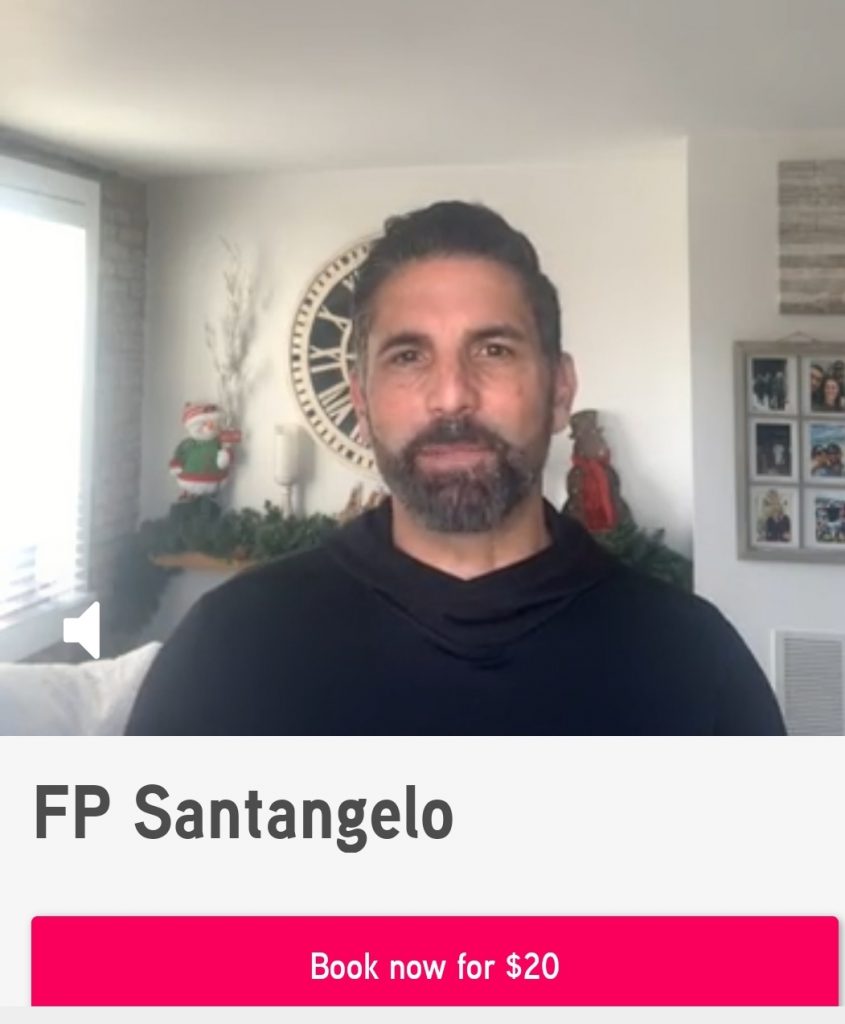 How’s about a World Series baseball exactly like the baseballs used in the World Series for $29.99 at the Rawlings website. You can get 10% off by signing up for their coupon. It is the perfect baseball to get autographs from the 2019 players. 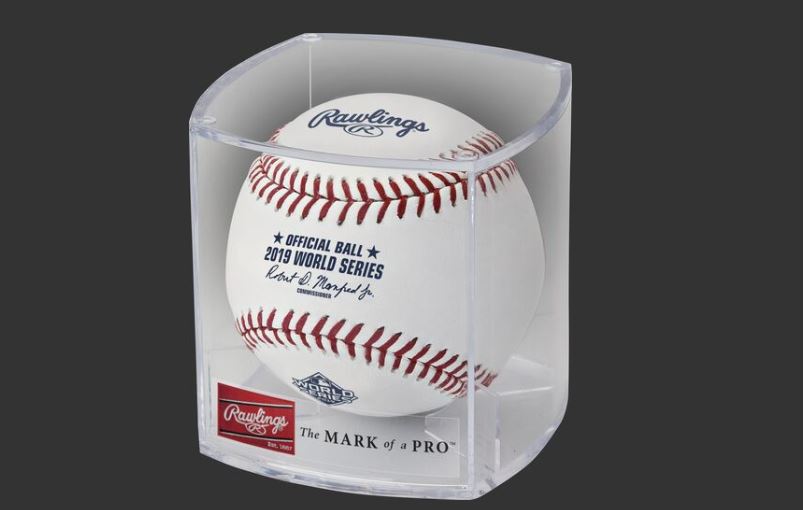 The official Washington Nationals World Series Championship Season commemorative book is available at $34.99. It is 128 pages and has a foreword by Ryan Zimmerman plus dozens of photographs that are unique to this book.

Most of you have seen the official New Era caps at Hatland, and they also have some unique caps with some plans for some exclusives. Check out this one for $35.69 on special. Here are some caps on Black Friday specials. 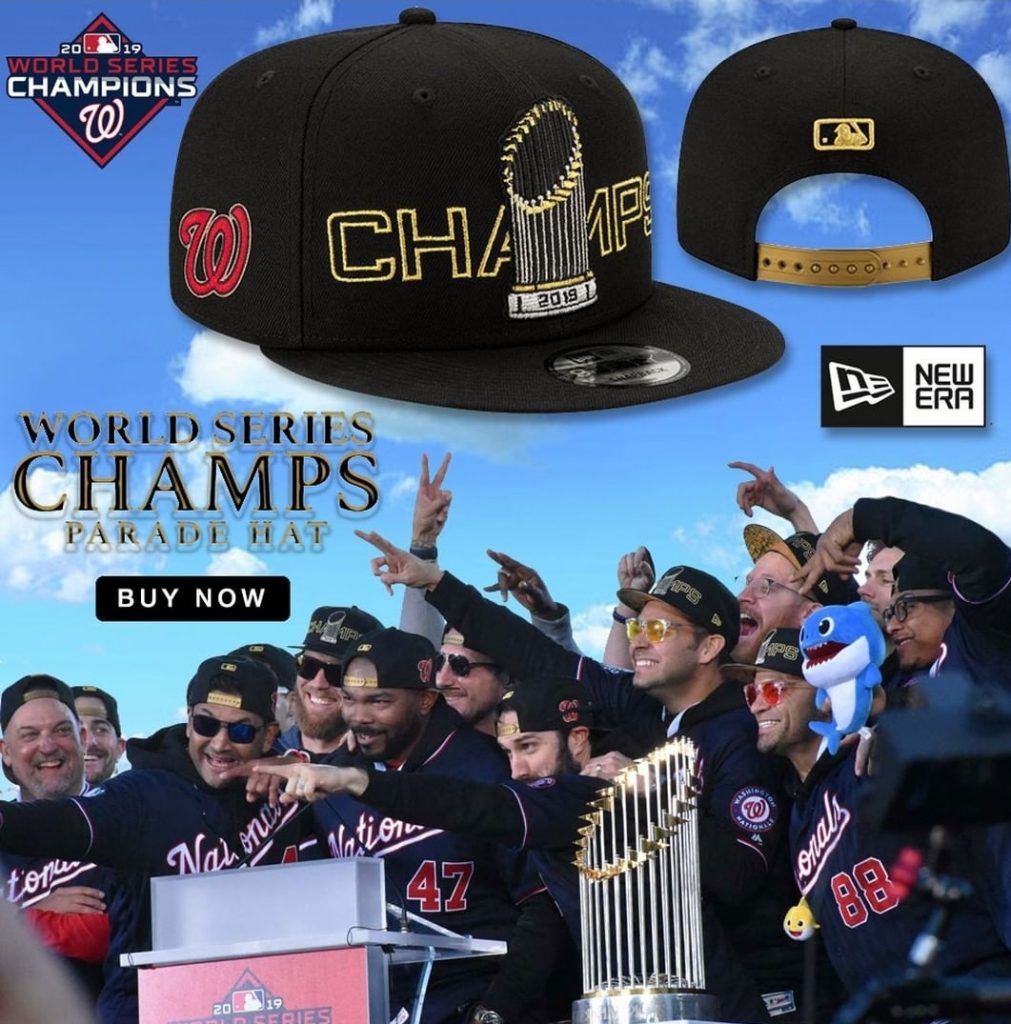 For something unique from artist Daniel Duffy is the Art of Words artwork of Ryan Zimmerman celebrating the last out in Game 7 of the World Series. On Black Friday special for only $40. 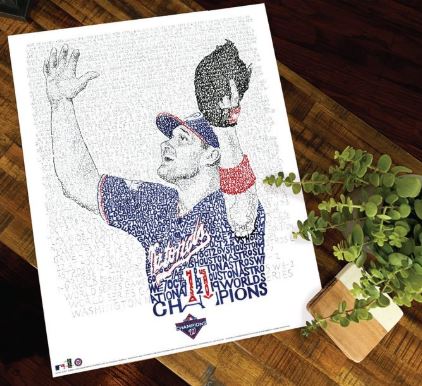 Who wants to go old school for $64.95 to a Timex watch? It takes a lickin’ and keeps on tickin’ was their slogan 65 years ago and was the watch Mickey Mantle wore. 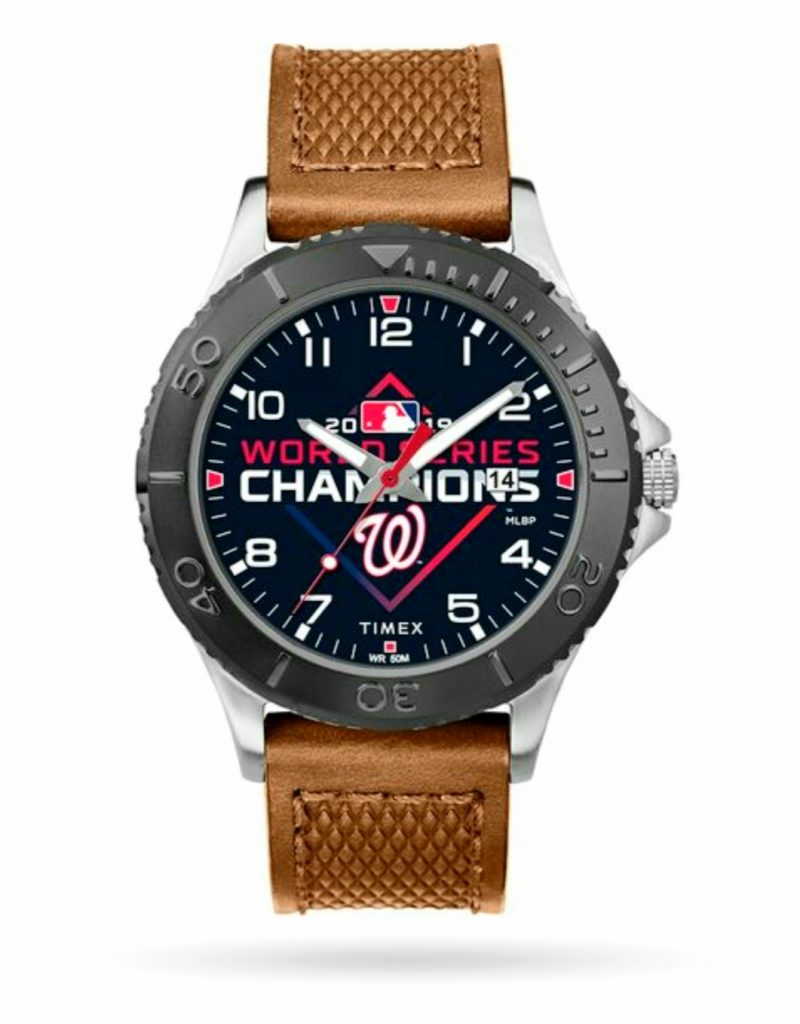 Do you want the “And Now We Dance” sweatshirt for $64.99 or less with a coupon on MLB’s website and at some Dicks Sporting Goods stores! You heard F.P. Santangelo speak those words often after a Nationals home run!

Who needs a Waterford lead crystal World Series baseball paperweight? Me. This beauty is $120 after you get 20% off with code CYBER20 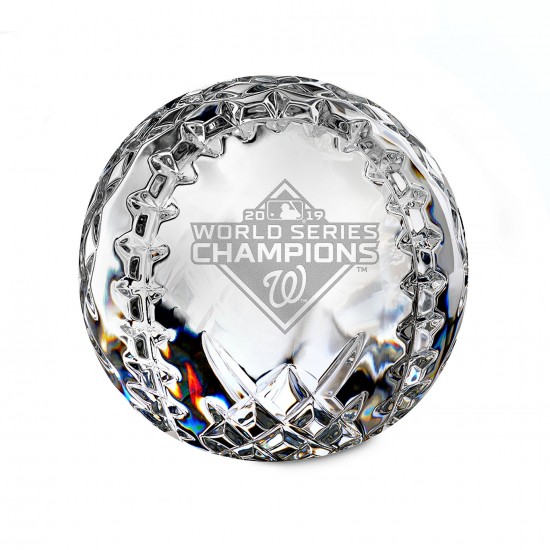 For those looking for some bling, click here is a Black Friday sale on some Washington Nationals World Series rings and the NLCS champion ring. On sale today at $129.99. 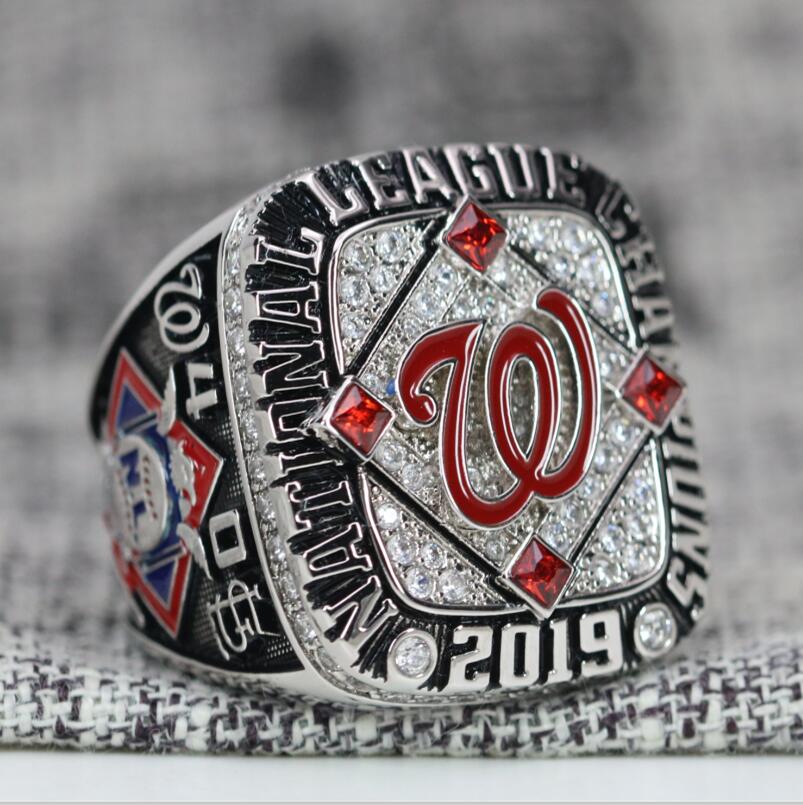 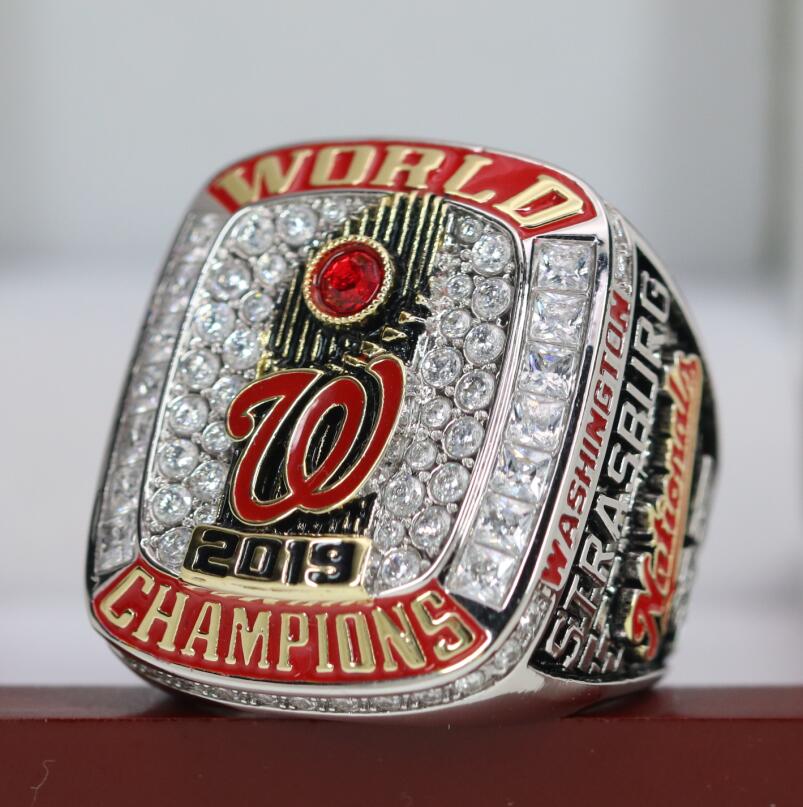 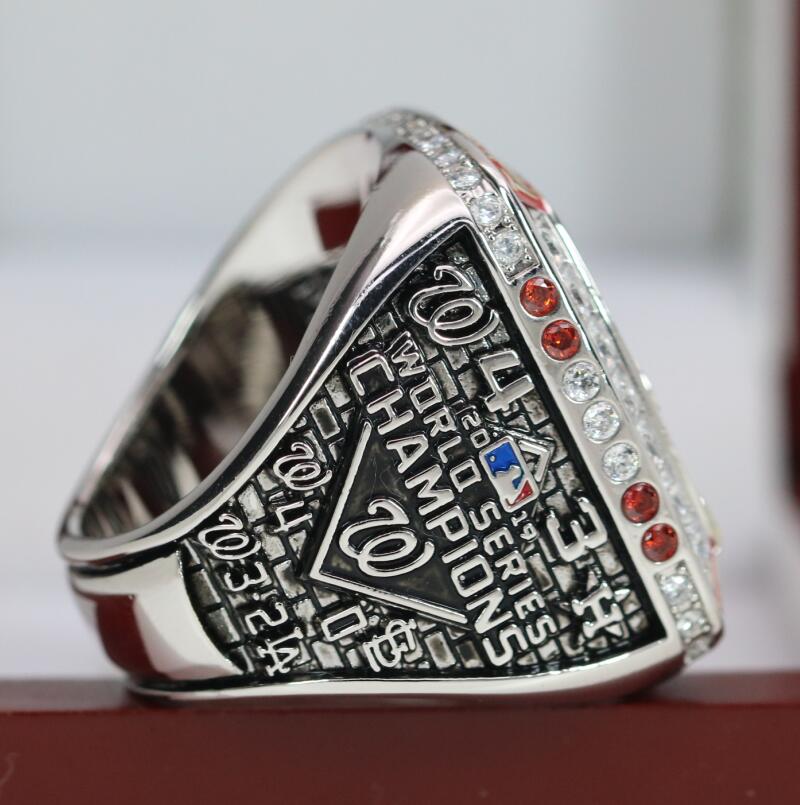 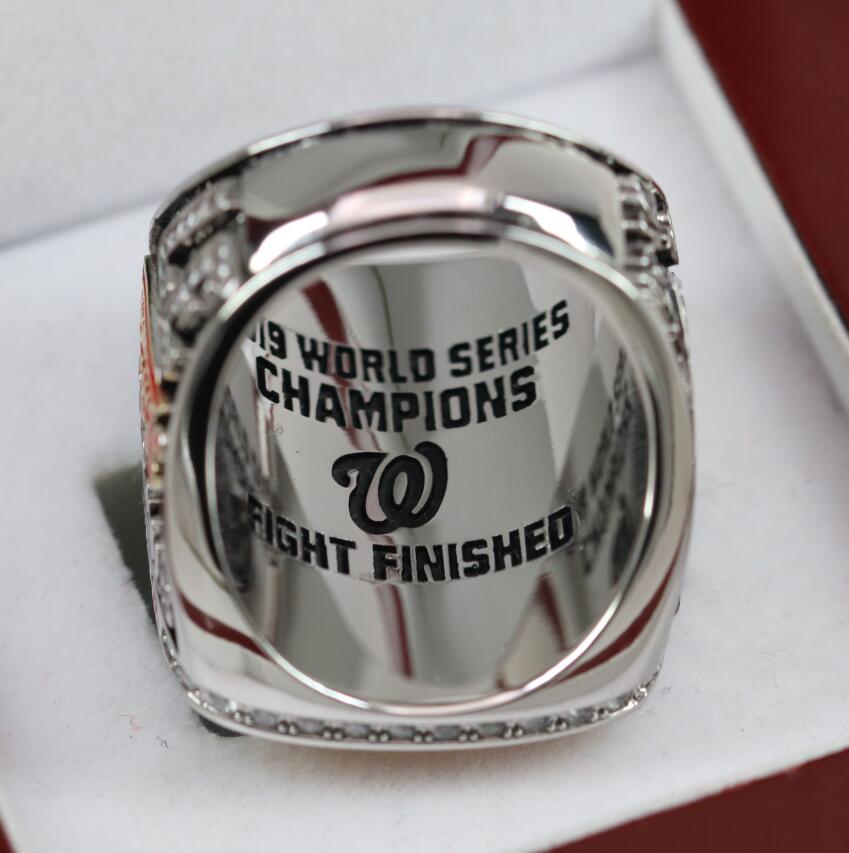 If you have $3,000 to drop, get a partial team signed World Series jersey with most of the star players. Of course you will need to get it framed to hang on your wall. 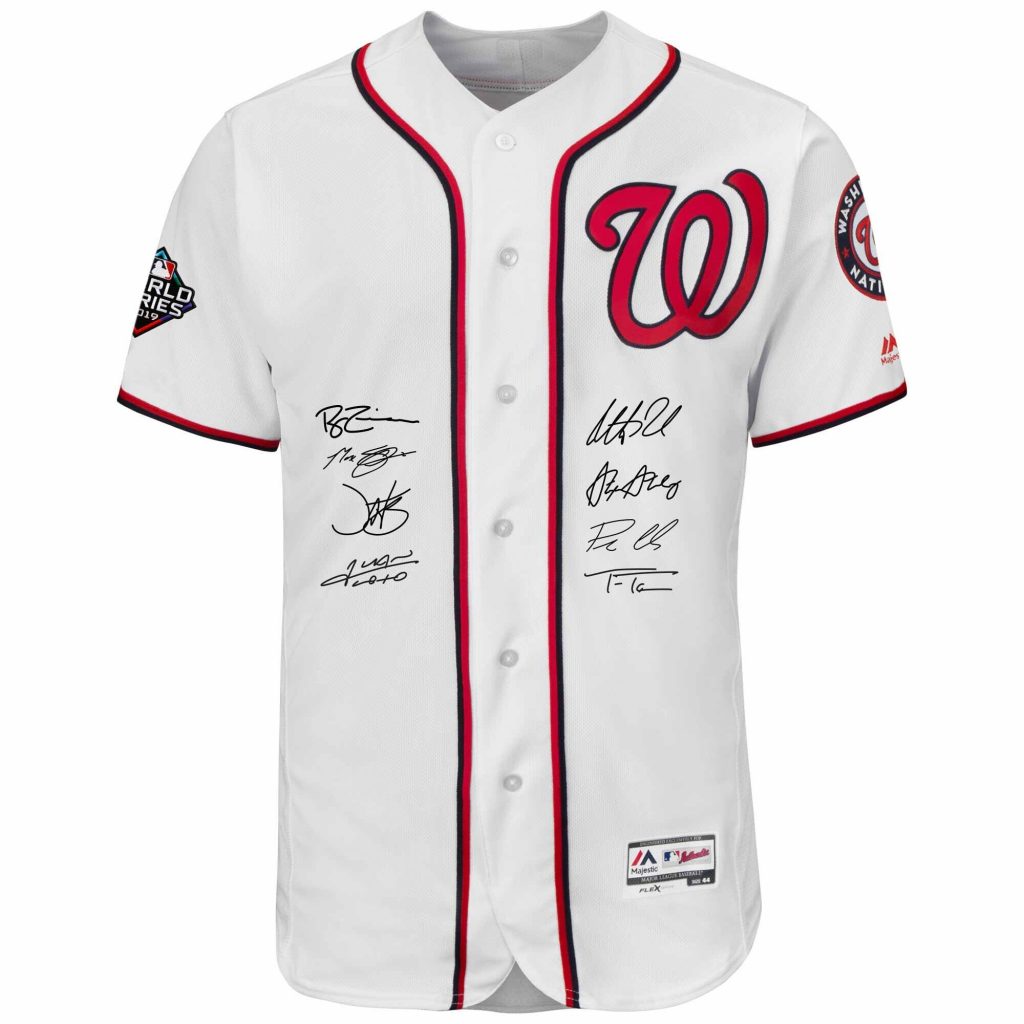 If you want a one-of-a-kind piece of artwork of the 2019 World Series, an official MLB artist can paint an original piece of art for you that could include your own personalizations. Opie Otterstad has been the official “World Series celebration” artist for 22 years and depending on the final size of the painting and the intricacies — the prices will vary. Get involved in the planning of the piece and contact Andrew at 202.716.8500 for a consultation. Prices from $15,000 to $100,000. 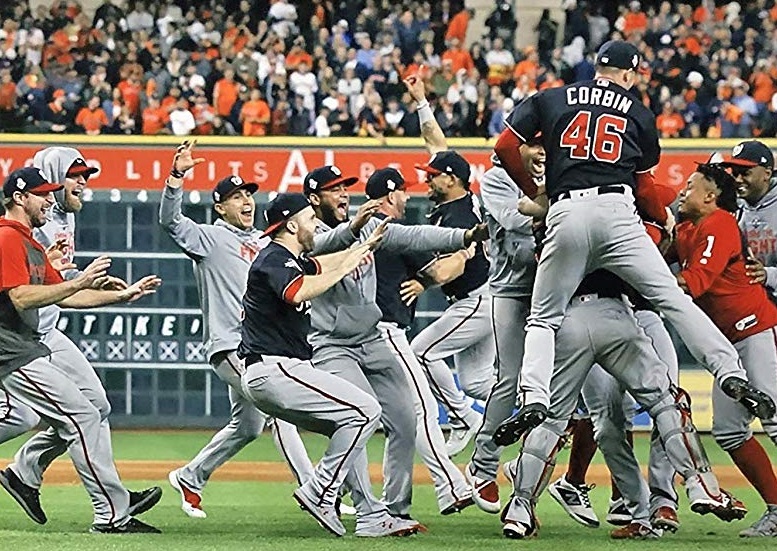 For someone looking towards their future and totally unique is your view of Nats Park as long as it is in existence. The Envy is a condominium building and the only residence you can own to watch from your balcony into Nats Park as Max Scherzer pitches in 2020 and beyond. Priced from just under $500,000 to over $1 million, they have many floor plans and a view that does not need a season ticket. 70 N ST. SE WASHINGTON, DC 20003 | 202.315.5426 and ask Matt Ford in the sales center for a private tour. H/T to Hugh Kaufman aka “The Chicken Man” for this one! 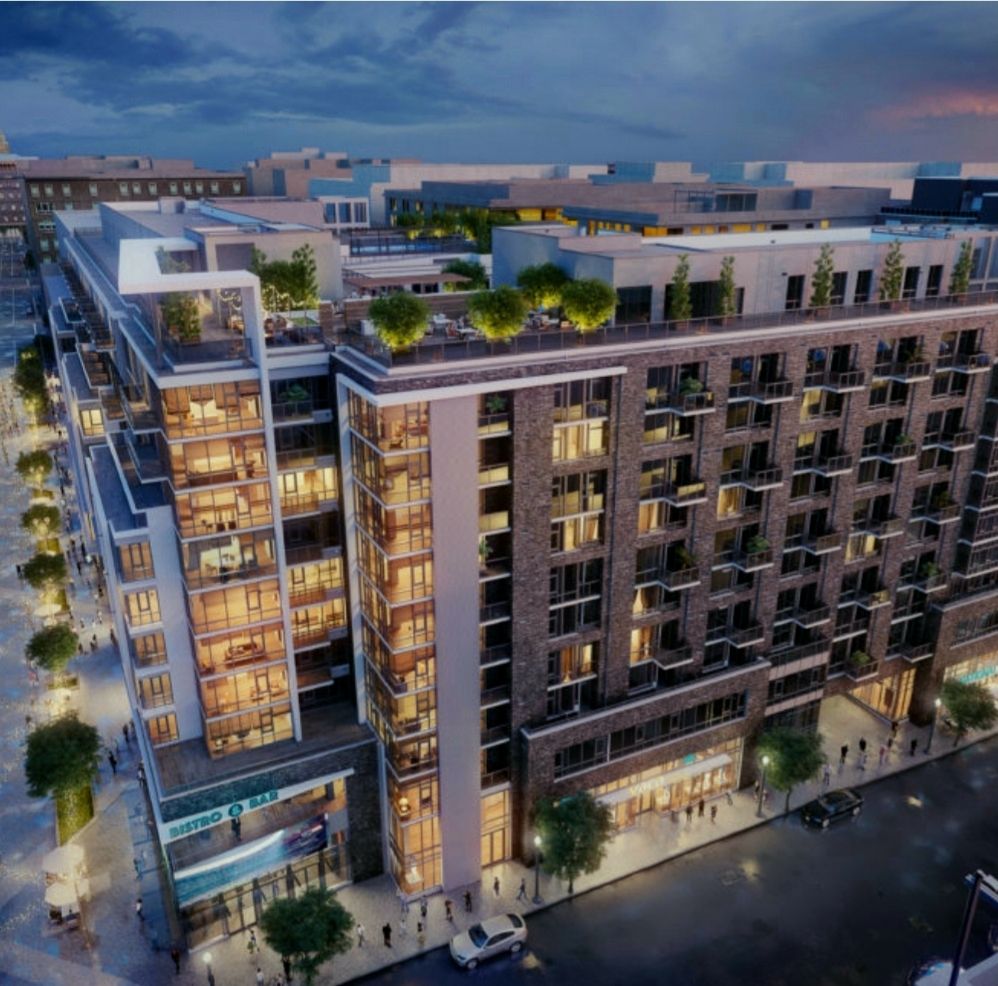 An artist’s rendition of the building upon completion 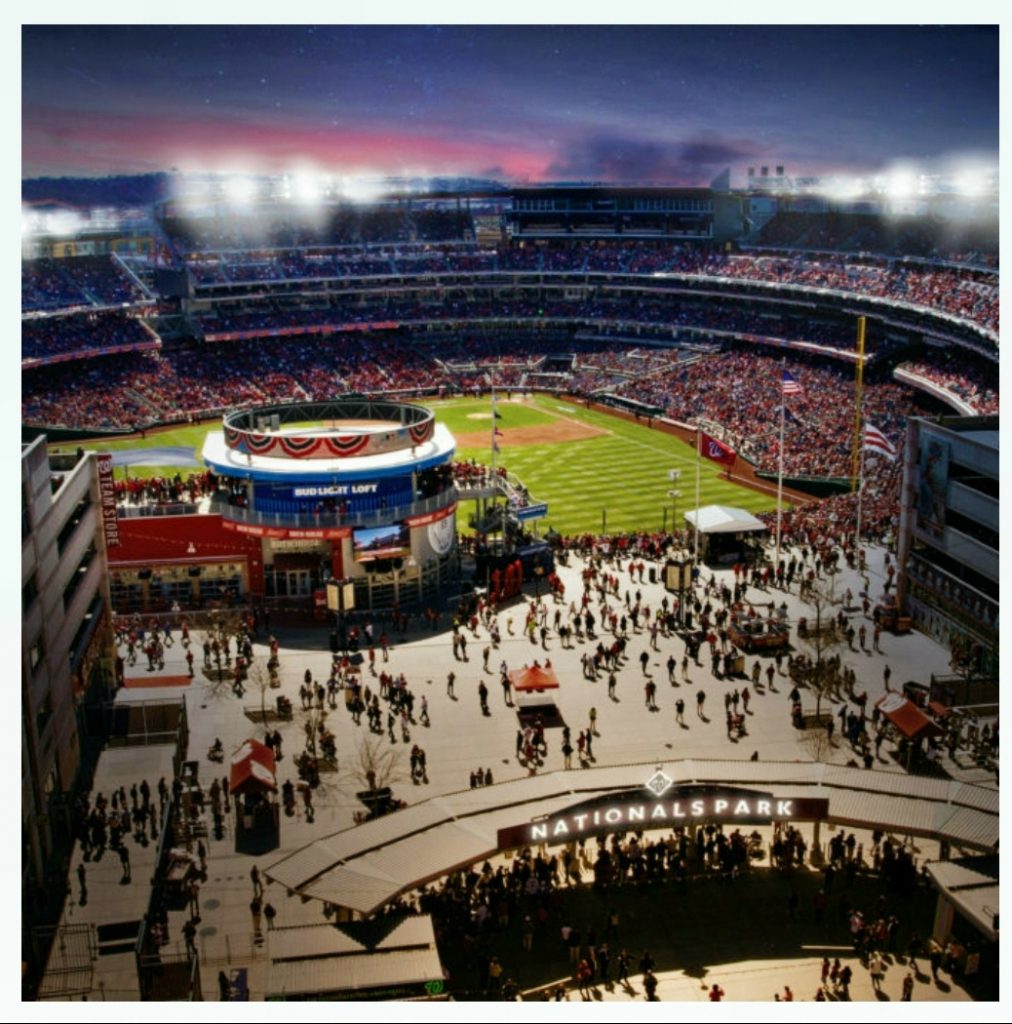 An actual view from the Envy Condos