Trea Turner has surgery on his finger(s) and he was one of 2019’s miracles! 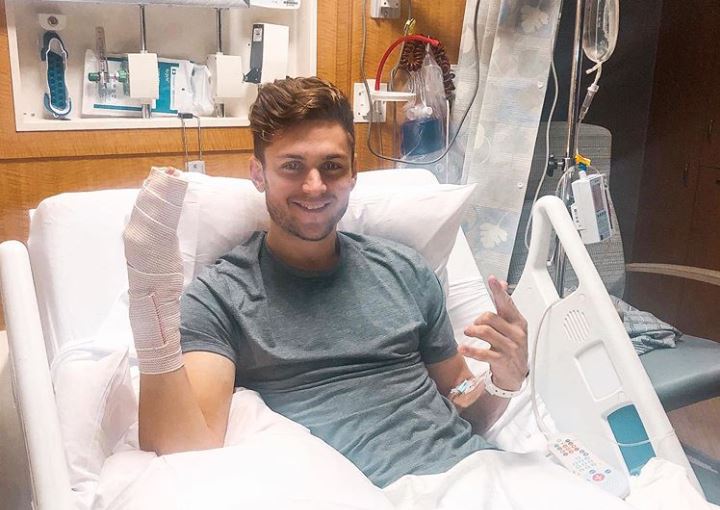 Baseball fans have seen Jim Abbott pitch and field with one arm, and in 1945 there was Pete Gray who batted with one arm and hit .218 for the Browns and was out of baseball after seventy-seven games as a fill-in during World War II. There is no comparison with the feats of Abbott and Gray to Trea Turner playing with eight healthy fingers, but what Turner pulled off was rather impressive given what he had to overcome.

Never one who would complain, Turner of the Washington Nationals played most of the season with eight healthy fingers which was quite the trick considering he finished the season batting .298 with 19 home runs.  As you can see in the photo (above), Turner was all smiles after his surgery to repair his previously non-displaced fracture in his index finger on his right throwing hand that never healed properly after it was broken along with his middle finger in the first week of the 2019 season. Turner’s right hand sustained the injury on a hit-by-pitch against the Phillies while Turner was attempting a bunt. In total, Turner missed 39 games on the IL and returned quicker than he should have. As they say, it usually takes 50 at-bats to get your timing back, and Turner was wrestling with his timing while also feeling comfortable holding the bat. But the fact is that he was only gripping the bat with his left hand and three fingers on his right hand as his teammate Anthony Rendon joked, “He has eight fingers right now.” What he accomplished was miraculous.

Ten games after his return from the IL, Turner’s batting average dropped from .357 to .238, and his once promising season where he was picked by some analysts to be an MVP candidate looked like a totally disastrous season in the making if the struggles continued plus his throws on fielding plays were taking a “hit” as he made some errant throws as he got used to throwing the ball without the full feeling in two of his fingers. The shortstop who hit the walk-off on “Opening Weekend” against the Mets for the first Nats win of the season was zapped of his power as he acclimated to his 8-finger grip. He persevered and finished the season with a strong .298 batting average and an .850 OPS and a +3.5 WAR from Fangraphs. Extrapolate some numbers for the ¼-season missed, and you can easily get to a value closer to a +5.0 WAR with the time missed and the devaluation from those rehabbing games in May that eroded his stats.  A +5.0 WAR would have put him behind only Rendon in top team WAR for position players although even with his actual +3.5 he was finished as the third most valuable Nats position player behind just Rendon and Juan Soto.

Privately, Turner’s teammates knew he was “taking one” for the team when he came back to the struggling Nats who as you know were an abysmal 19-31 after play on May 23rd. Publicly, nobody in the clubhouse talked about Turner’s fingers until September when the timing was right for Turner to do a one-on-one interview on the road with The Athletic’s Britt Ghiroli. She got Trea to talk about the situation even though he was guarded and did not give up too much info at that point. Maybe it was a weight lifted off of his shoulders that much of the story of his finger(s) was now out there. His teammates and hitting coach Kevin Long spoke to what Turner endured. After the postseason was done, Turner actually showed the world on MLB Network what those mangled fingers looked like from a side view as he could not fully bend that index finger on his right hand.

“The season’s done, I’m good now,” Turner said after the World Series win on MLB Network. “We’re going to figure it out.”

Figure it out they did as Turner had a surgery scheduled with a hand specialist for mid-November. The video embedded in the Tweet (above) by the MLB Network showed the fingers that Trea demo’d for the world to see that he could not bend his index finger fully, and last week he had the corrective surgery on the index finger performed by Dr. Michelle Carlson who is an orthopedic surgeon specializing on hands and fingers at the Hospital for Special Surgery in New York City overlooking the East River in Manhattan.

Neither Turner nor the Nationals gave specifics about his timetable for his recovery, and it still is not known if the surgery was to repair the ligaments in the finger or the bone itself. Spring training is a little over 90-days away for position players, but keep in mind, players generally are in their pre-season routines in January. This time nobody wants to rush Turner’s recovery. He will be ready when the doctor says he is ready. Fortunately, Opening Day for 2020 is 128 days away so Turner has four months to get ready.

In 2018, Turner posted a +4.8 WAR, and it looked like 2019 was going to be his breakout season. In a way it was as his level of “clutch” included three walk-off hits during the 2019 season which helped propel the Nats to the postseason. Without those three wins, who knows, but Turner found a way to help his team. He did not steal enough bases for some, and he explained why he sometimes will not steal a base in order to open holes for his teammates as Turner is held on-base and wreaking havoc on the pitchers timing. It seemed to work as his teammate Anthony Rendon still drove in Turner 37 times which was the most of any teammate and that factored in Turner only playing in 122 regular season games.

If the livelier Rawlings manufactured baseballs of 2019 make it to the umpire’s ball pouches in 2020, Turner should certainly hit 25+ home runs with fully functional fingers. With his speed, he could even join Ronald Acuña in the exclusive 30/30 Club if he can ratchet up the power to get to thirty dingers. With those types of numbers, Turner would join Acuña as an MVP candidate in 2020.

The future is certainly bright for Trea Turner, and he was an integral part of the 2019 World Series championship season. When he gets his World Series ring, it should fit perfectly on that ring finger on his right hand!

“Only took 7 months to get this finger fixed but now my ring will fit better!” Turner wrote on Instagram.

Fangraphs is projecting a conservative +4.1 WAR for Turner’s 2020 season in which he should get a sizable raise in his second year of arbitration as a Super-Two to $6.5 million to $8.0 million. He is under team control for 2020 and two more years after that. Turner, Juan Soto, and Victor Robles now make up the young core on this team as they figure out who will play third base if Rendon does not return as well as Turner’s doubleplay partner up the middle as Brian Dozier is not expected to return. For Turner’s part, he adapted well to the rotating second basemen as manager Dave Martinez split up playing time between the three different second baseman who all got a fair amount of playing time between Dozier, Asdrubal Cabrera, and Howie Kendrick. All of those second basemaen are now free agents, and even with Kendrick playing part-time, he was the fourth most valuable Nats position player in terms of WAR in 2019. In fact Ryan Zimmerman is a free agent also at this point making Turner the only regular infielder who is under team control right now in 2020.

“He’s tremendously important to us,” Rendon said. “He has so many freakin’ talents. He can hit for power; he can play both sides of the ball. When he was out for that 1 1/2 months, we definitely missed him.”

Freakin’ talents for sure, and we look forward to a healthy and productive 2020 season for Trea Turner!