Aaron Barrett helps his team; Unfortunately the next reliever into the game gives up 3 runs! 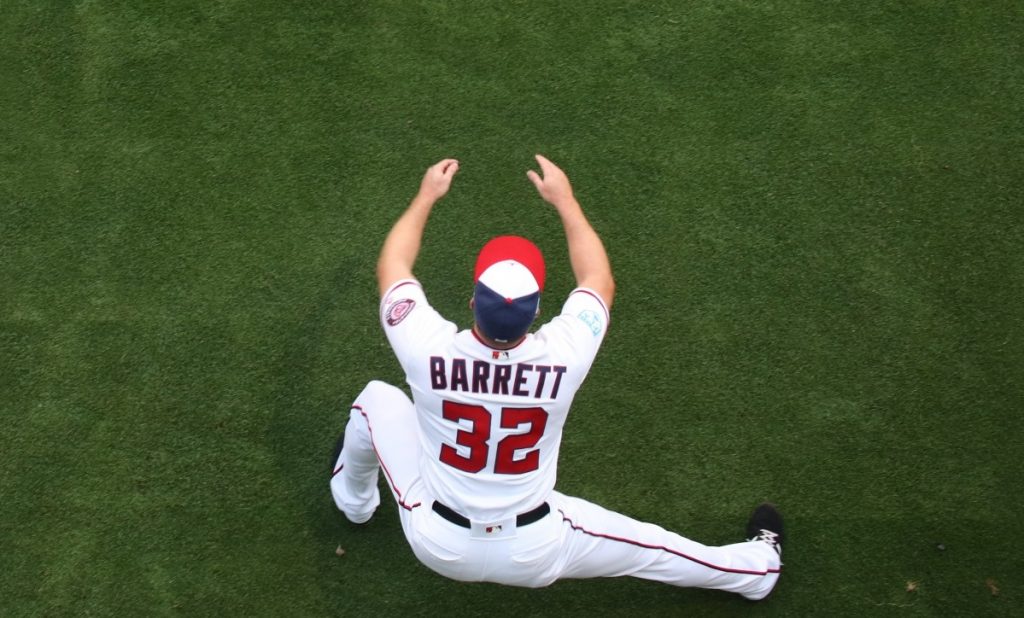 Another one-run loss happened again tonight for this 2019 Washington Nationals team, and they are now mired in a 4-game losing streak. This team got a very nice start from Austin Voth (2 earned runs), and an emotional scoreless inning of relief from Aaron Barrett. It was definitely a special moment to have Barrett back after four years of rehabbing from arm injuries. That was all great until the 2-1 game was handed to Hunter Strickland who gave up two home runs and three runs and the game went to 5-1 in favor of the Braves. The Nats then loaded the bases with no outs in the top of the 7th inning against a struggling Sean Newcomb who loaded the bases on walks, but Ryan Zimmerman swung over a center-cut curveball against the lefty and bounced it into a tailor-made doubleplay to kill the inning. In the next inning, the Nationals started another rally as Juan Soto would clear the bases in the 8th inning to make the score 5-4. Unfortunately the Nats could not score again and lost their 21st one-run game.

Only three Nats batters had hits tonight in what amounted to five total hits, and three of those came from Trea Turner who had two doubles and a single. The other hits were from Asdrubal Cabrera who got the Nats on the board with a long home run, and Juan Soto had the team’s fifth hit, driving in two runs which were historic as he notched his 100th RBI joining Mel Ott, Al Kaline, and Ted Williams as the only players to ever hit their 100th RBI in a season before turning 21.

Some more bad news in the game was Kurt Suzuki hurt his arm as he felt pain in his throwing elbow. He was removed from the game, and the Nats had to go to Raudy Read as their third catcher as Yan Gomes had already been replaced by Suzuki. This has to possibly point to a call-up of Spencer Kieboom who was put on the Double-A IL with an undisclosed injury that a source told us was a minor arm injury.

On Tuesday, Ryan Zimmerman seemed to get the monkey off his back in bases loaded situations as he cranked a two-run double against the Mets in a pinch-hit spot, but now he has struggled two nights in a row with bases loaded.  Zim has rolled into devastating doubleplays with bases loaded bringing back the questions of what has happened to him? He is now 7-44 in bases loaded spots since 2016 and that is a putrid .159 batting average. Maybe this is all one bad coincidence, but the fact is there is a four year history there of some poor at-bats.

For some good news, Sean Doolittle added back his toe-tap in his delivery and looked much better as he made some big pitches. The velo isn’t there but he was locating his pitches better. He got Brian McCann on a groundball, and then two strikeouts on Johan Camargo and Billy Hamilton. Doolittle’s velo went from 91.7 on his fastball to 93.7 mph.

“Doolittle threw the ball well, manager Dave Martinez said. We’re going to need him. That was a big spot for him, and he came in and did well.

With the Disney moment, the Aaron Barrett inning was magical. He walked the first batter he faced on four pitches then faced the opposing pitcher and in a 1-0 count he was gifted a strike then he locked in a got out of the inning, and even had a strikeout of Ronald Acuna.

Aaron Barrett after first MLB appearance in over 4 years. pic.twitter.com/DR3kEVmTJO

After the inning, Barrett headed to the dugout and was seen crying from the moment. It was special for anyone who knows this kid and what he has gone throw from an elbow injury and broken bone in his arm. From over four years of rehabbing, he now has a 0.00 ERA in the Major Leagues in 2019.

“It was a moment I will never forget,” Martinez said.  “I’m just really happy I was a part of it.”

You have to wonder who the actor will be portraying Davey Martinez if the Aaron Barrett story ever becomes a Disney movie.