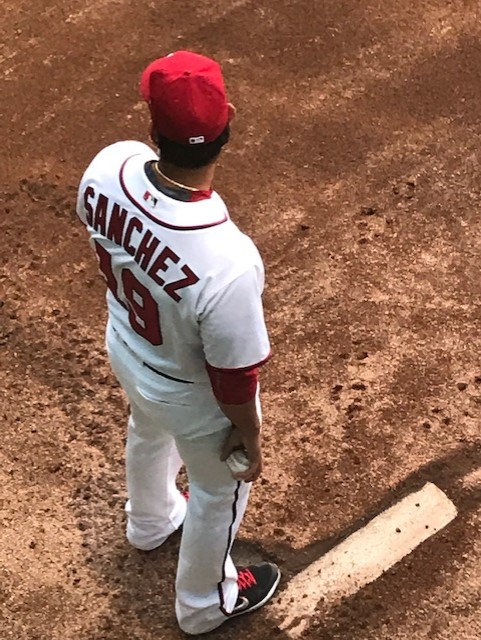 The Nationals nineteen game season series against the rival Mets came to a conclusion today with a loss to make it a dozen on the season against the Mets with only seven wins. The Nats made the Mets starter Zack Wheeler work hard, and he was very inefficient early but only surrendered one run. He gave up seven hits and two walks on 101 pitches in five innings, but Anibal Sanchez gave up seven earned runs in five innings where he just was not locating pitches and the movement was not fooling Mets batters as they torched him for three home runs. This looked like the April version of Sanchez and in his last start he struggled also in five innings of work. Three starts ago Sanchez pitched to a season high of 112 pitches into the 9th inning in a 9-0 game.

The Nats had bases loaded in the second inning with the right man up in a 3-2 count, but Anthony Rendon hit a weak fly to leftfield to end the threat. The pitching let the game slowly get away until it was a 7-1 deficit, and that seemed to motivate the Nationals who put three runs on the board to make it 7-4. That was as close as they were going to get as the final score was 8-4.

Day games after night games are tough for both teams, and after last night’s game, you wondered how the Mets would show up today. They answered the call for sure in this game. For the Nats, there are certainly some question marks going forward for the team including what is up with Anibal Sanchez, Joe Ross and the bullpen. Sanchez will get an extra day’s rest the next time through the rotation, and hopefully he can get back to where he was for most of August.

The other question mark is reliever Sean Doolittle. He got only one swing and miss pitch of his 22 pitches he threw today, and all of his outs were recorded on balls in play. He reached 94 mph on his fastball, but was not getting whiffs where late inning relievers must live. He gave up one hit and one walk, but he was far from dominant as he works his way back. The first batter he faced took him to the warning track, and Wilson Ramos hit him hard up the middle on a ball that Howie Kendrick dove for and robbed Ramos ending his 26-game hitting streak.  There was a scary moment as Doolittle stumbled and fell to his knee after a pitch. He stayed in the game after a visit by the trainer and coaches and completed his inning.  With this outing, Doolittle finished his 86th game from 2018 to now with this 9th inning appearance which gets him 14-games from turning his team option to a mutual option if he reaches 100 games finished.

The Nationals will head to Atlanta shortly where they have a four game series that will begin tomorrow.