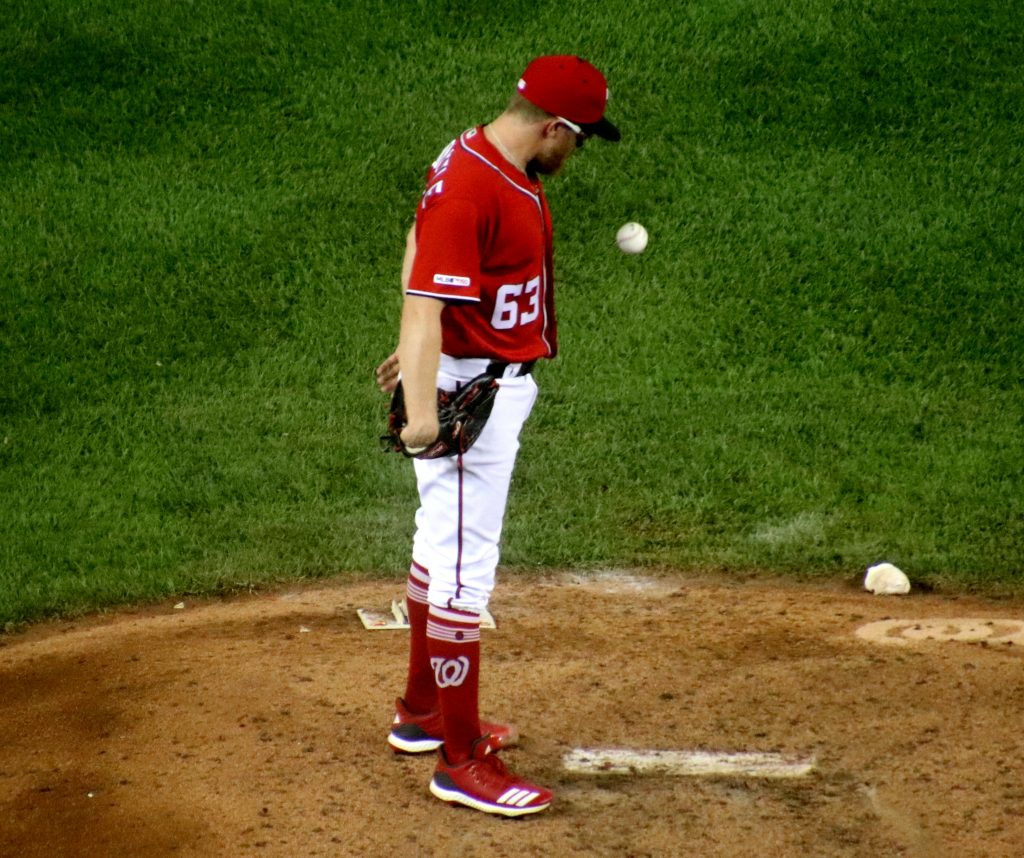 Sometimes the definition of insanity is doing the same thing over and over and expecting different results, and the Nationals once again had a three run lead in the 9th inning like they did eight days ago and five days ago and again tonight and each time Sean Doolittle was brought in to close out the game. In those three games, Doolittle blew two saves and was a run away from another and combined gave up 10 earned runs. Why has manager Dave Martinez followed the same game plan in each game? The last two fastballs that Doolittle threw tonight had diminished velocity at 91 and 90 mph which are well below his season’s average 93.6 mph.

Somehow this time, the Nationals would get a shot in the bottom of the 9th inning, and the Nats tied up the game to push it to extra innings. Earlier in the game, starting pitcher Anibal Sanchez gave up five runs and after a Juan Soto two-run home run and an Adam Eaton three-run home run the Nats tied the game. Reliever Matt Grace took over and gave up three runs and Trea Turner hit a three-run to take a 9-8 lead and Howie Kendrick hit a two-run home to make the score 11-8 and that is when Doolittle gave up his four runs to make the score 12-11. The crowd was electric and numbered 36,953, but as this game went to four hours and beyond it thinned out.

Eventually the game finished at five hours and forty minutes well past midnight with the Nats on the wrong side on this one. The Nats offense and defense got Doolittle off the hook so to speak just like they did with Matt Grace and Anibal Sanchez. The only one of that group with initials next to his name was Doolittle with a BS6 which in baseball scoring means his 6th blown save. His ERA — an unhealthy 4.33 for a closer but even worse when you look at the 7.36 it has been since the All-Star break.

And @Boporter16Bo said it well, "This team is in a pennant race. You want Sean Doolitle to be your closer. You want him to be successful but right now I don't think he's able to do it because of the workload in which he had earlier in the season. It has caught up with him."

The Nationals would not give up in this game.  Victor Robles tied the game in the bottom of the 9th inning, and the game played on. In the 13th inning, Christian Yelich hit a solo home run off of Javy Guerra, but then the Nats clawed back and Victor Robles launched a sacrifice fly to tie the game again to push the game to the 14th inning. The Brewers in the top of the 14th in this battle of attrition got to Javy Guerra for a two-run home run to make the score 15-13. The Nats almost made it back but fell short at 15-14.

You can certainly fill in the rest of the back and forth in all of the innings as both teams had their chances, and the Nats had multiple chances even in the 9th inning to walk-it-off.

“This team is definitely competitive.  They don’t quit,” Martinez said.

The star of the game was Victor Robles who tied the game twice but also had two outfield assists in this game to nail runners. Every position player contributed and every pitcher did also.

“I definitely want to have a conversation with Doo and figure something out what’s best him —  what’s best for the club, ” Martinez  said. “And make sure he’s ready because as far as I’m concerned we have a lot of baseball left. If we’re going to move forward and do the things we want to do, he’s a big part of that. So we gotta make sure we take care of him.”

Figuring out what to do with Sean Doolittle has to be a priority for his own health and the performance of the team.

Doolittle said more than that but sometimes your eyes tell you all you need to know. He has a lot to figure out and so does his manager, pitching coach, and general manager.