A 4-inning pitcher’s duel turns into a bloodbath as Nats score 10 in the 5th for the win! 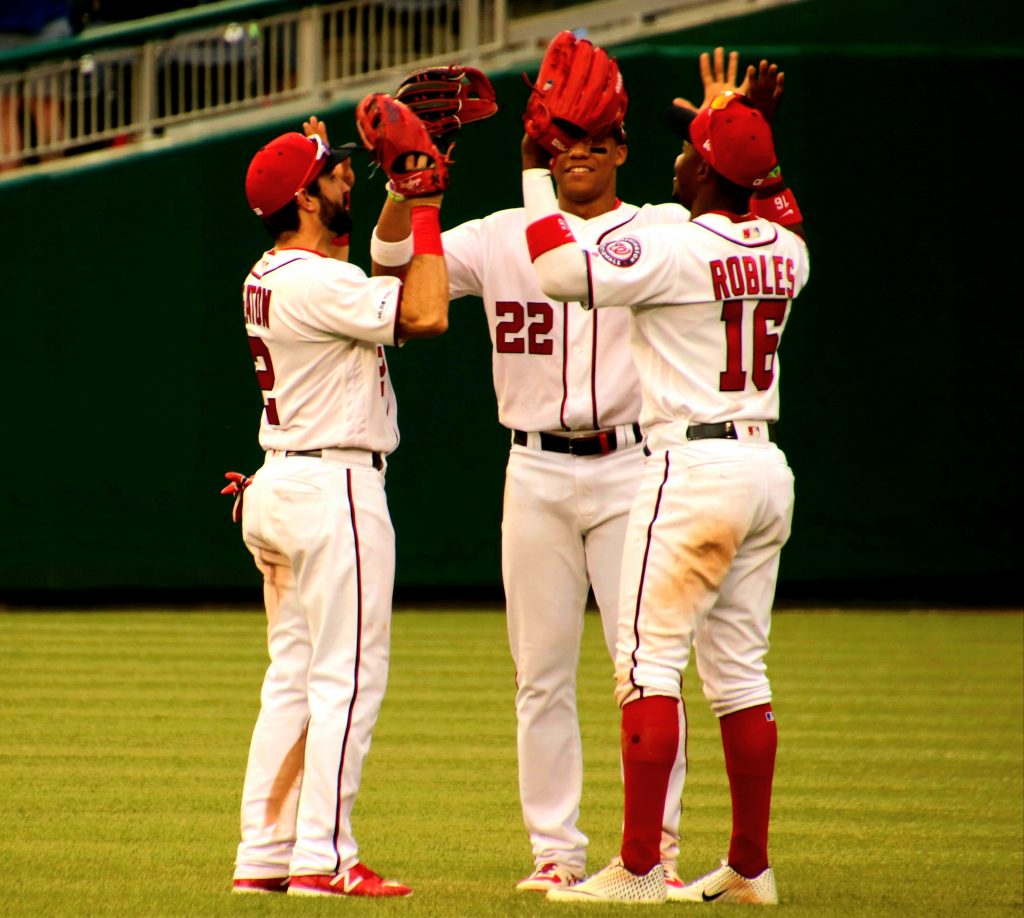 This game had the look of a classic pitcher’s duel between Stephen Strasburg and Trevor Bauer as they went to the bottom of the fifth inning in a 1-1 game. Both runs were scored without a hit, and this game looked like the next mistake by either team could be the difference in the game. But the bottom of the fifth inning would change everything with one out and Stephen Strasburg up to bat with 2 strikes and runners on third and second base, the former Silver Slugger served a forehand over the second baseman to score one run to make it a 2-1 game as the wheels were about to come off. The Nats then hit a single, Adam Eaton 3-run home run, Anthony Rendon solo home run, single, walk, and finally a pitching change at a 7-1 game. The Nats continued to roll and finished the inning at 11-1 while putting 9 earned runs on Bauer’s ledger in 4 1/3 innings. That 10-run fifth inning set a record for these 2019 Nationals for runs scored in one inning.

Maybe the only negative in the game was that Strasburg, who had a very long layoff between innings, came out sluggish for the sixth inning and had words for his manager and stayed in the game to struggle to 110-pitches and exited at 5 2/3 innings with four earnies. After the inning, catcher Kurt Suzuki and Strasburg had words and exited to the clubhouse in an 11-4 game.

“He didn’t want to come out,” manager Dave Martinez said. “He wanted to finish the inning, so I just told him, ‘All right, you got one more hitter. Let’s go. This is it.’ He was fine after that. I think he was just a little upset he couldn’t get through the inning. But you know what, he’s competing out there, and he knows what’s going on with our club, and he wanted to get through that sixth inning.”

In the bottom of the sixth inning, the Nats would tack on six more runs, and the stats were getting padded in this one with every starter with at least one hit and each starting position player had exactly two runs scored by each. Several Nats had multi-hit games. Victor Robles continued to stay hot going 3-5 while raising his batting average above .240.

With the large lead, Matt Grace closed out the sixth inning, and Javy Guerra worked the last three innings which earned him a save. Yes, a save. That is an MLB scorekeeper’s rule that a “save” is awarded to a pitcher closing out the final three innings of a win. With the day-off tomorrow, this blow-out allowed manager Dave Martinez to rest everyone except for Grace and Guerra from the bullpeners. It will work out well for Sean Doolittle who will have a much needed three calendar days-off leading into Friday, and that is where this unexpected blow-out had the perfect timing from a game that looked like a low scoring pitcher’s duel. For Strasburg, he won his 15th game of the season and with 42 games remaining in the season, Strasburg will get seven to eight more starts and a chance for 20 wins.

The final score was 17-7 in this one. Did we mention that the Nats took all three games in this series from the Reds for the sweep? The Nats extended their winning streak to four games and improve to their best mark of the season at 10-games above .500.