Fedde holds his own while the bullpen almost gives it back; Trea puts 4 on the board! 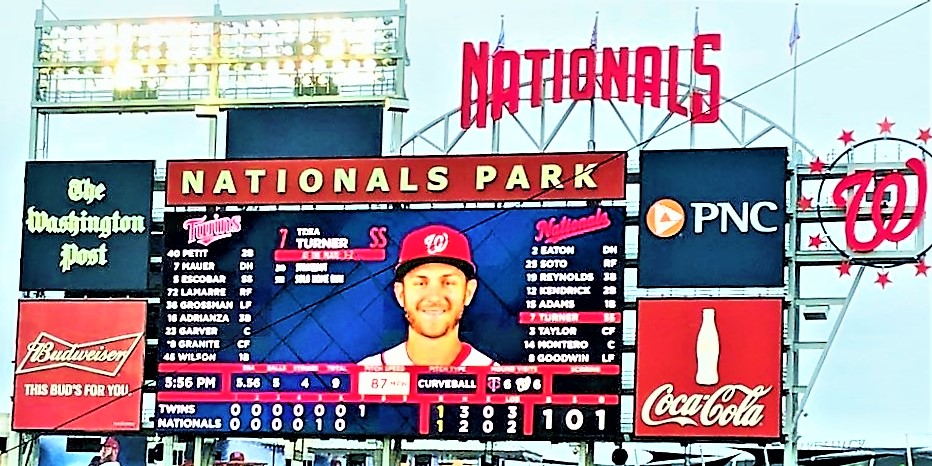 The Washington Nationals won this game by a final score of 7-6, but it should have been a blow-out win. Starting pitcher Erick Fedde went 6.0 innings only giving up 2-runs and departed with a 6-2 lead which almost fully evaporated in the bullpen. Fortunately Trea Turner‘s 3-run home run and RBI single in the 7th inning made the difference in the end. The first batter of the game ambushed Fedde on the first pitch of the game for an oppo home run, and Fedde settled down after that with some help of his defense. It also helped that he had a lead to work with after Matt Adams hit a 2-run home in the first inning.

Situationally, the Nats offense put together eleven hits and four walks to give themselves opportunities, and one of the biggest hits came from Fedde who singled in front of Trea Turner to keep the inning going with two outs and that is when Trea hit his 3-run home run. Everyone in the lineup had hits except for Kurt Suzuki and Anthony Rendon who struggled with the bat and in the field today and that will happen in a long season and his teammates picked him up.

For the bullpen, Javy Guerra threw a scoreless 7th inning, but Tanner Rainey entered with a 7-2 lead in the 8th inning, and he struggled and walked the leadoff batter in the inning which turned into two runs when rookie sensation Aristides Aquino mashed a 98 mph fastball down the center of the zone into Section 143 about 15 rows back for a monster home run that cut the lead to 7-4. Before the home run, Rainey could have been out of the inning as he got a possible doubleplay ball that was too hot to handle for Rendon who bobbled it and only got one out which kept the inning going.

For the 9th inning and a 3-run lead, manager Dave Martinez went with his closer, Sean Doolittle. He struggled from the first pitch that pinch-hitter Phillip Ervin hit deep for a home run. With anther hit, the tying run entered the batter’s box, and the stress meter ramped up. Doolittle got to two outs and got Joey Votto on a foul tip that would have ended the game, but catcher Kurt Suzuki could not hold onto the ball giving Votto second life. As you surmised, Votto then hit an oppo flyball that stayed in the yard by a few feet and was catchable but Gerardo Parra took a bad route in front of the visitor’s bullpen and did not glove the flyball allowing the sixth run to score.

Votto just misses a HR. Doubles off the wall instead after a grinder of an AB. It is now 7-6.

This is where the game got real interesting for manager Dave Martinez in the 9th inning. He decided to walk  Eugenio Suarez to put the winning run on-base in order to give Doolittle a lefty-lefty matchup against the rookie Josh VanMeter, and he fouled out to end the game. It was perhaps one of the best moves by Martinez in this chess game.

While Doolittle is pitching at usages he has not achieved since 2014, he is also well on his way to deciding his own fate after the season if he finishes just 17 more games due to a clause in his contract where his team option would convert to a mutual option at 100 combined games finished for 2018 and 2019.

One of the big hits of the game came from Howie Kendrick who returned from a 10-day stint on the IL, and he promptly crushed a double off of the out-of-town scoreboard and scored on the Trea Turner single in the 7th inning.

On defense, the star was Victor Robles who put his mark on the game in the first inning that could have spiraled out of control. Robles uncorked a heater to home on a rope at 99.5 mph from 220 feet (according  to Statcast) to nail Joey Votto even before he got to the plate as Votto just surrendered himself without a slide. The throw ranked as the fourth fastest of the year among outfield assists. For Robles, it was his eighth assist of the season which is tops in the National League. That throw cutdown Votto at the plate in a spot which could have turned to a disastrous inning if not for Robles who also had a single and a double in the game to make it a great night for the toolsy rookie.

In the pregame, Martinez said that Juan Soto was available to pinch-hit. Soto sprained his ankle yesterday, but prepared in the pre-game to play even though he was not in the starting lineup. Soto did not emerge from the dugout in the 8th inning with two men on-base and the pitcher’s spot up at that point versus a right-handed pitcher. Martinez inserted Brian Dozier who was supposedly sick with the flu so it begs the question, where was Soto? Oh well, the important end to this evening was a Nationals win and valuable space gained in the standings. The Nats moved to 63-55 on the season and a ½ game above almost every team as the rest of the NL East was idle tonight as were all of the teams considered in contention for the Wild Card.

Holland has minors deal with Nats