A laugher, but not much fun for Stephen Strasburg and the #Nats

Posted on August 3, 2019 by SaoMagnifico 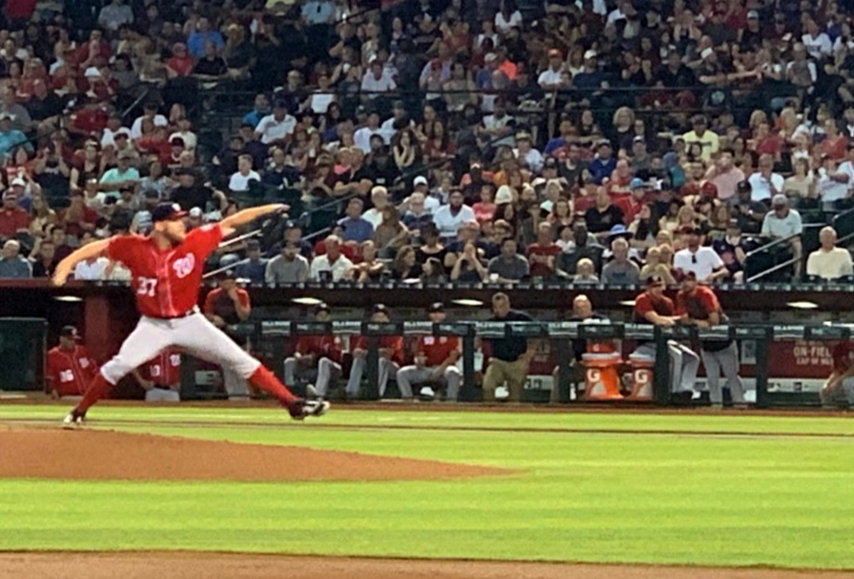 The Arizona Diamondbacks annihilated the Washington Nationals tonight in a game that was so one-sided that it saw not one, but two Nationals position players pitching in the bottom of the eighth inning.

Fresh off being crowned NL Pitcher of the Month in July, Stephen Strasburg followed up one bad appearance against the Dbacks earlier this year with an awful one tonight. He gave up eight runs before leaving the game in the fifth inning, and Matt Grace immediately allowed a home run to cash in an inherited runner, putting nine earnies on Strasburg’s line for the night.

The Nats actually got on the board first against Robbie Ray, leading off the game with back-to-back hits and then a sac fly, but while three runs were enough to win last night, four wasn’t even close to enough tonight, as the Dbacks came out swinging for the fences. Arizona smacked five homers today, including a three-run blast by Eduardo Escobar on a Brian Dozier knuckleball. Yeah, this game got really weird.

After Tanner Rainey melted down with four walks in the seventh inning, newly acquired Daniel Hudson made his Nationals debut to strike out David Peralta, improving to 24-of-25 inherited runners stranded for the season.

In the eighth, Davey Martinez turned to Gerardo Parra, who has always wanted to pitch an inning in the big leagues, and it just didn’t work out. Parra came out firing lefty heat, hitting 92 mph, but his command was spotty and just deteriorated after Christian Walker reached base on balls. After Parra walked reliever Zack Godley to force in a run, Martinez handed the ball to Dozier, who let in five runs but at least got through the inning.

Anthony Rendon homered off Godley in the ninth to bring the Nats back within eleven runs, and Juan Soto and Kurt Suzuki reached base to force Godley out of the game an out away from a three-inning save. If only Dozier had gotten on against against T.J. MacFarland, then Parra hit a grand slam, then the Nats loaded the bases up two more times and hit two more grand slams without making another out, they could have given Sean Doolittle a chance to record the save.

The final score was 18–7, and the Nats will look to former Diamondback Patrick Corbin to secure a series win tomorrow after Strasburg couldn’t get it done tonight. To add insult to injury, the Atlanta Braves won to extend their division lead back to seven, and the Chicago Cubs and Philadelphia Phillies won to leave the Nats tied with Philadelphia for the second wild card. The New York Mets and San Francisco Giants won too. It was not a good day.

Mike Rizzo announced before the game that, as feared, Roenis Elias “tweaked” his hamstring yesterday and will be reevaluated tomorrow. If he goes on the injured list, it’s unclear who will replace him, but the Nats could select the contract of recently DFA’d Javy Guerra, who was outrighted to Triple-A Fresno but did not appear in the Grizzlies’ twelve-inning marathon in San Antonio today.