The #Nats bullpen will look much different on Friday

At some point today at the Nationals’ team hotel in Scottsdale, Arizona, there will be some new guests checking-in by the last names of Hudson, Elias, and Strickland. These are the new bullpen pitchers who the Nationals traded for yesterday. Rarely do you see a one day change where a bullpen will have 37.5% or more turnover. If they arrive early enough, they might get in some golfing at Camelback or just relax at the pool where they could run into some new teammates, and at some point they will shake hands with general manager Mike Rizzo, manager Dave Martinez, pitching coach Paul Menhart, and bullpen coach Henry Blanco. Hopefully  the new guys can meet up sooner than later with their catchers, Yan Gomes and Kurt Suzuki, and get a few minutes with each. Tomorrow, the real work starts as the Nationals have their pitcher’s meeting for the new series against the Arizona Diamondbacks. The acclimation period is short, and like most teams the catchers have been provided with analytics on their new pitchers.

For the right-handed Daniel Hudson, he throws a fastball that sits at 96 mph, and he can touch 98 while also mixing in slider and changeup. The newest lefty acquisition is Roenis Elias who inherited the closer position after Edwin Diaz was traded from the Mariners. For Elias, his repertoire is a 94-95 fastball, a curveball and a changeup, and occasionally he will throw a sinker. He likes throwing his breaking pitch high and let it drop. The last time the Nats saw Hunter Strickland it was in a pile on a mound in San Francisco after a brawl  with Bryce Harper in 2017. There will be some mixed emotions for sure with him no matter how you feel about Harper, and Strickland is the same guy who broke his hand after punching his locker in 2018. Strickland is a high octane fastball and slider guy when he is on the mound. Those players will replace three players who will come off of the roster. The Nats have told us only that Javy Guerra and Michael Blazek have been DFA’d which means there will be one more roster move. We believe that Erick Fedde will be optioned which gives general manager Mike Rizzo five days before he needs a fifth starter. It could be Wil Crowe‘s chance unless Max Scherzer is feeling well enough to return. Scherzer’s move to the 10-day IL was retroactive to July 26th. 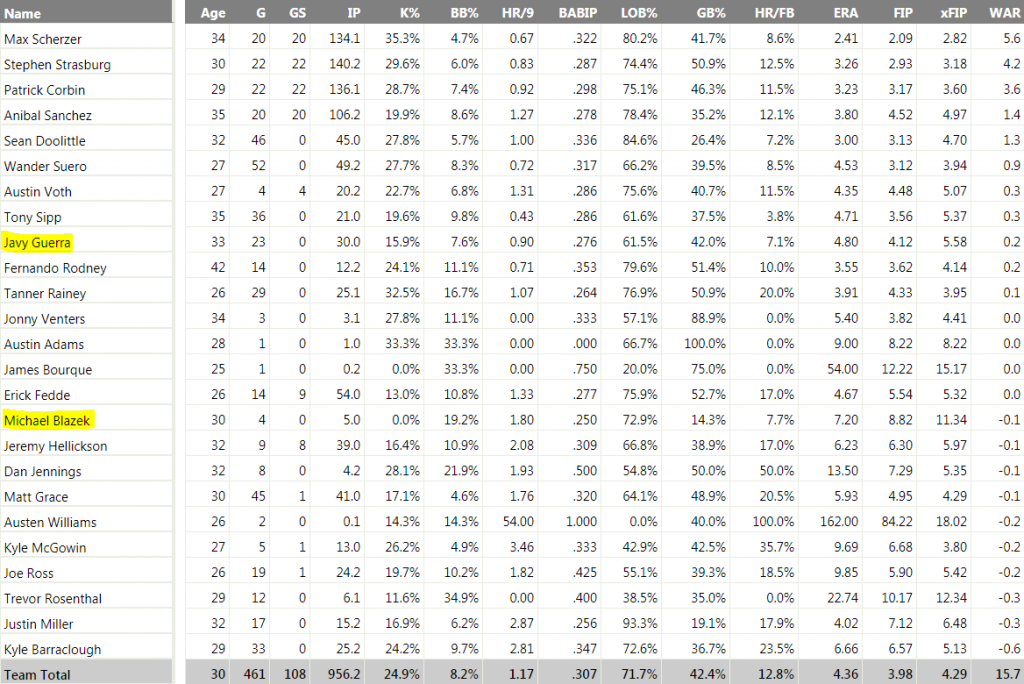 As we compare relative values of the incoming trio of players compared to the departing Guerra and Blazek, it is not an apples to apples approach by any reasonable measure. Hudson recorded a +0.4 WAR and Elias at +0.2 and Strickland in his four games is at -0.1 for a cumulative +0.5, but they replace Guerra and Blazek who were a combined +0.1. The difference is +0.4. The ‘pen arms who did the most damage are gone like Trevor Rosenthal, Justin Miller, and Barraclough is back in the minor leagues. Collectively, those three cost the Nats -1.2 in WAR. If you compared the new trio versus that departing trio you would think incrementally the new bullpen is so much better, but the Nationals bullpen has been improving for a while now even though they are far from perfect.

“We definitely want to bring in a guy that’s going to help us win games,” Martinez said.

For the season, the bullpeners are still hovering in the stratosphere of awfulness at a 5.99 ERA which is still last in baseball, and the Sabremetrics xFIP is also a league worst 5.07 xFIP. Yes, this is much improved from the 7.43 ERA they were at in mid-May. The real damage has been in the loss column, and the negative -7.98 WPA (win probability added) in this case is actually “win probability subtracted” meaning the bullpen as a group has not won games for the team rather they have lost a mind-blowing 8 games (rounded up 0.02).  Those 8 games are the difference between this team being 57-51 and 65-43, and pushing for the best record in the National League if they had a positive WPA.

The Nats lost another game yesterday with their best reliever, Sean Doolittle, on the mound. He did not throw a bad pitch as it was outside the zone but not as high as Kurt Suzuki wanted the pitch and yet somehow the batter extended his arms and body and somehow got it over the centerfield wall. Baseball can be a cruel game. Doolittle’s odometer is being ratcheted up, and you just hope the new pitchers can ease some of the use at the back of the bullpen and more evenly distribute the load.

“Every time I go into a game now, I’m setting a new high in games pitched and in innings pitched as a National,” Doolittle said. “So we’re all feeling it a little bit. It’s that time of the year. It will be good to have some new toys.”

When the dust settles, you can expect the bullpen to stay at 8-men, and right now the roster has nine. We know Doolittle, Fernando Rodney, Wander Suero, Tanner Rainey, Hudson, Strickland, and Elías are all in unless there is some Rizzo surprise or 10-day IL move. Then there is the last spot for a lefty which favors Matt Grace for his flexibility over Tony Sipp — but we will see.

“These guys are all qualified to pitch the 7th, 8th, and the 9th inning,” Rizzo said. “They all have saves on their résumés, and they’re all ‘stuff’ guys that can get big outs at big times. The role system, I think that’ll kind of work itself out. We’re just kind of getting our arms around the new acquisitions and see where it goes amongst the way we’ll rotate them in the bullpen.”

When Davey Johnson had his 2012 Nats on a hot streak, he had a bullpen of virtual unknowns beyond Tyler Clippard. No big fastballs except for Henry Rodriguez (MPHRod) who had no idea where the ball was going, and mostly he had pitch-to-contact guys in his bullpen. Brad Lidge was a DFA before the All-Star break, Ryan Perry had a 10.13 ERA, and Rodriguez did not make the postseason roster. The Nats went to the postseason with Drew Storen as the closer, Clippard as the key set-up man with Craig Stammen, Tom Gorzelanny, Christian Garcia, Ryan Mattheus, Sean Burnett and Mike Gonzalez. Those eight arms changed the course of every game, and only Clippard stepped up and was better than his regular season stats. The difference between 2012 and now is that Mike Rizzo stepped up at the trade deadline and got his manager a new set of pitchers. Now Davey Martinez must make this work. This team was built for the postseason, and now must show that they have what it takes to turn that WPA to a positive number!