Game #94 Erick Fedde gets the call-up for today and a rant about the schedule! 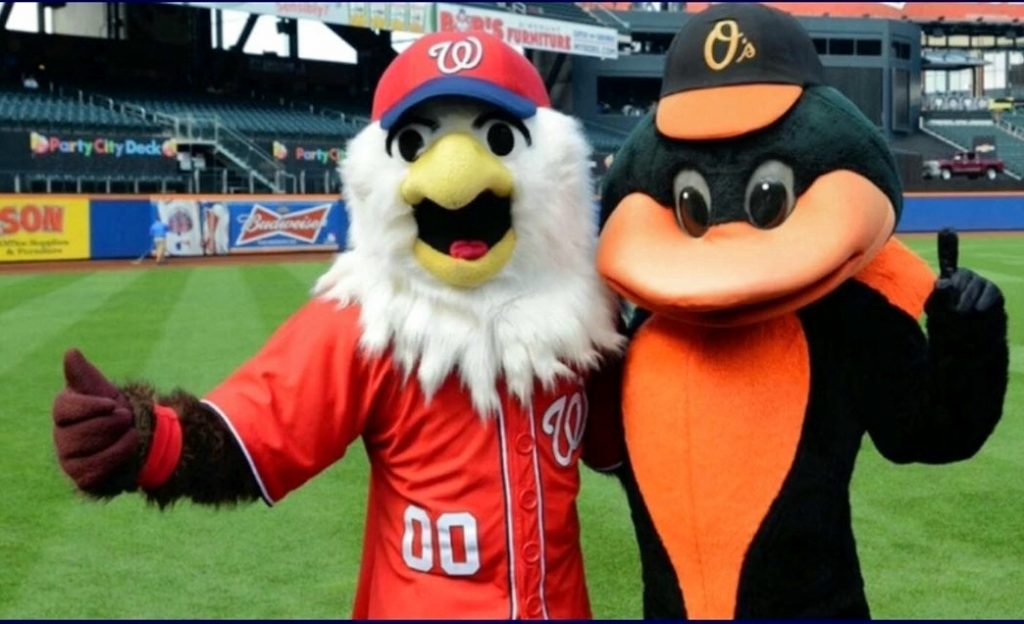 This series between the Washington Nationals and Baltimore Orioles was once a good rivalry, and MASN hyped it as the “Battle of the Beltways” which was a catchy moniker for the main event if it was a heavyweight fight. On paper today this is more like a street fight with the big kid (the Nationals) and the little kid (the Orioles). The baseball schedule has these matchups monthly due to the disparity with teams that are “tanking” like the Orioles, Royals, Tigers, and Marlins. The names on the Orioles roster are unrecognizable for the most part, but yet, you play the games and in the 162 game schedule, these are the games the “big kid” must win.

The Nats were dealt a cruel hand when Max Scherzer went on the 10-day IL giving the Orioles a much fairer fight to face some of the Nationals minor league pitchers who are callups to pitch in this series. Last night, it was Austin Voth who was called up, and he started off shaky and loaded the bases with one out and fortunately for the Nats got out of the mess on the way to an 8-1 Nats blow-out win. Tonight the Nationals will call-up Erick Fedde who is on extra rest from his recent stint in Harrisburg Double-A. Fedde, has a starter’s ERA this season of 3.94 and had been pitching well until his last two starts where he faced two powerhouse offenses with Arizona and Philadelphia.

For Fedde, he started off this season looking like he figured it out. After one of his good starts he credited his success to being aggressive and going after batters. Then he got away from that plan and was nibbling which resulted in a carousel of walks issued. The Nats still have the #5 slot open on the roster with Jeremy Hellickson still on the 60-day IL, and the Nats braintrust has some interesting decisions to see who pitches in the number five spot next time around in the rotation. While many have counted out Joe Ross, he finally put together a promising start in Triple-A last night going 7.0 innings of 2-run baseball with little help from his defense. If Max Scherzer can pitch this weekend, the 5th starter will be needed on Monday in Nats Park against the Rockies. If Max cannot go, Anibal Sanchez will pitch on Saturday and most likely Voth will pitch on Sunday in Atlanta.

Tonight, the Orioles will pitch the 29-year-old Aaron Brooks who has 17 career starts to his record.  He was recently released by the Oakland A’s after he posted a 5.01 ERA. The righty made his debut with the Orioles four days ago as an “opener” and will return on short rest to make this start. As the story on MLB Network Radio said, this is the former New Orleans Saints quarterback, it is not — if they were joking, they made me do the research.

While MASN and the Orioles continue hyping this game as “The Battle of the Beltways”, the Nationals can roll their eyes at this watered down game as these two teams are on distinctly different paths. Last night’s attendance in Orioles Park at Camden Yards was reported at 23,362, and there was probably less than half that showed up and based on the applause after the Matt Adams and Juan Soto home runs — there were plenty of Nationals fans as part of that number. In fact, before last night’s game, the Orioles had posted an average attendance of 17,173 a game so they got a near 33% windfall of over 6,000 additional fans. That influx of extra fans and revenue for the Orioles is most likely part of the reason today’s game which is a getaway game for the Nationals was scheduled in the evening instead of the afternoon. Contrast that with the Nationals opponent tomorrow, the Atlanta Braves, and they got an early afternoon game in Milwaukee. The Nationals will arrive at their hotel probably between 3 am and 4 am, and the Braves will be tucked into their beds before Jimmy Fallon comes on the air.

That is what this is probably all about to the Orioles side — a big money grab. Incite the fan loyalty from I-695 that this is still a “Battle” and maybe they will show up for a Brooks Robinson bobblehead or a giveaway condiment t-shirt and that is not a farce — that truly is the sponsored giveaway for tonight. Yah, that’ll do it. Don’t forget to buy a Natty Boh on your way out with your $1 hot dog. In the meantime, the Nationals will fly out of the region to Atlanta sleep deprived. 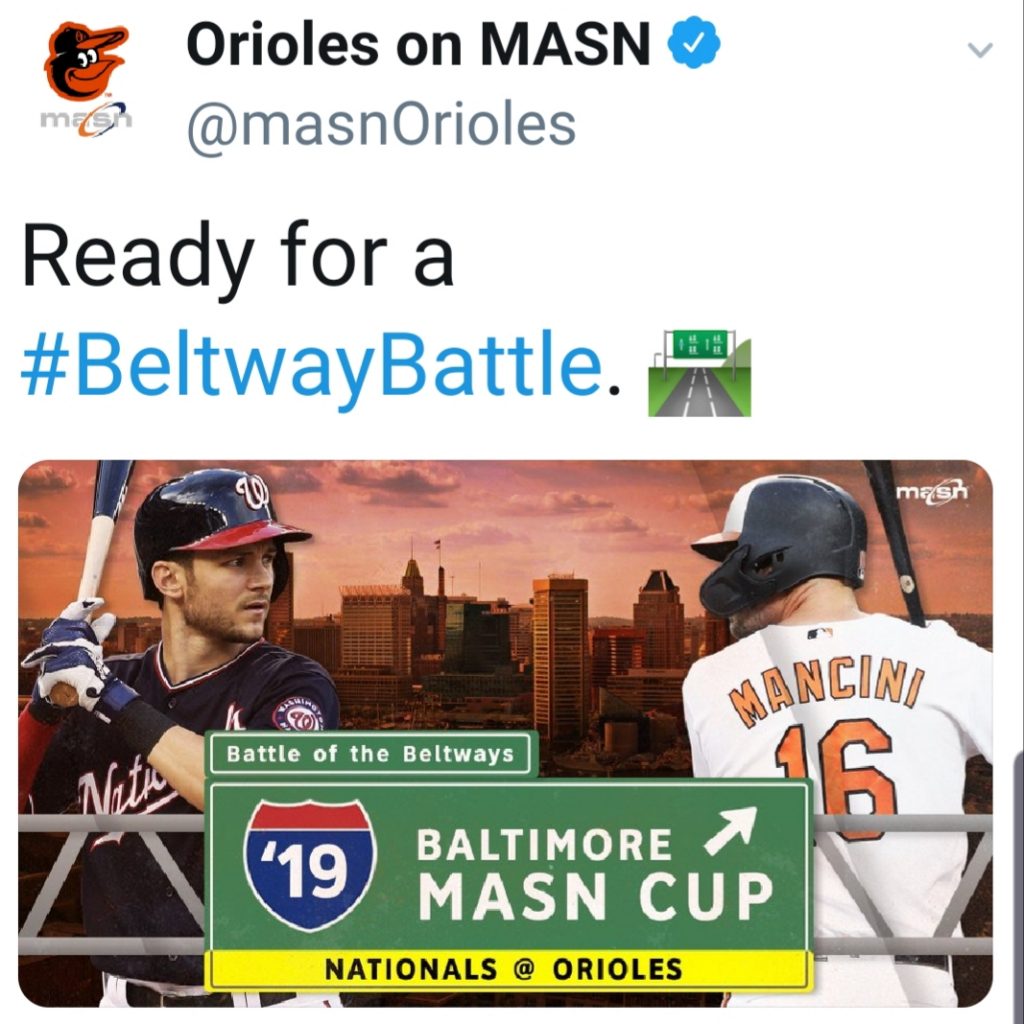 The MLBPA changed the labor rules beginning in 2018 that if a flight is more than 2 1/2 hours to the next destination that the home team must move up the start time. Since the Nationals flight to Atlanta is less than 2 1/2 hours, the Orioles kept this as a night game. In an interview that ESPN did with union chief Tony Clark, he said the improved travel rules were “fundamental to the health and performance” of players and were negotiated “against the backdrop of keeping guys on the field as often as possible” and the new rules were put in place to protect players’ health against sleep deprivation and wear and tear. Yes, it is a big deal. On top of that, the Nationals will go through sleep deprivation again on Sunday night because their game against Atlanta was flexed to the ESPN Sunday Night game. Those are the required inconveniences when you are a good team. Unfortunately, that is two sleep deprived nights in a five day span.

While the owners of the respective teams are still embroiled in the ongoing MASN lawsuit, rumors emerged that the Nationals were interested in a trade for back-end reliever Mychal Givens. As most fans of these two teams know, they have never traded a player between each other. They have signed each others players as free agents or on the Orioles side they have feasted on the Nationals DFA’s which included most recently Pedro Severino. The Nationals track record of signing ex-Orioles free agents like Matt Wieters and Nate McLouth has not worked out well. The last franchise trade was all the way back in 2001 when Tim Raines was traded from the Expos to the Orioles. According to the quotes that Washington Post writer Barry Svrluga obtained, there are no ownership edicts on either side that dictates that the GM’s cannot trade.

While it is doubtful either team will trade with each other, the teams will wrap-up this short two-game series late tonight, and they will see each other for two-games in Nationals Park at the end of August. Interestingly enough, the second game of that series in D.C. is a night game, but both teams have days off the next day.