The Nats “Big Four” is going FOR it! 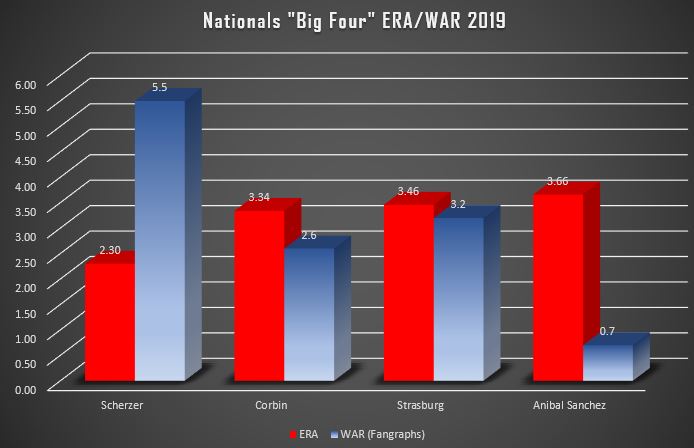 Pitching, pitching, pitching, and pitching. This Washington Nationals team since 2012 has been built on starting pitching, and that is paying big dividends now. Last night it was Stephen Strasburg who just threw another shutout for this staff. Is there a better starting four than Max Scherzer, Patrick Corbin, Strasburg, and Anibal Sanchez? It is debatable as the Tampa Bay Rays and the Los Angeles Dodgers rank one and two in overall starting pitching ERA, and the Nationals rank third (3.51) due to the issues in the number five spot in the rotation. The Nats claim to fame is a “Big Four” that could be the best the team has ever had, and the group is quietly doing it with little fanfare. Only Scherzer was named to the All-Star squad out of this group. Certainly not shocking.

“They’ve carried us throughout the season and will continue to,” general manager Mike Rizzo said. “Our roster is based on them performing well. The ‘Big Four’ guys have pitched terrific for us. Patrick had a two or three game little blip right there, but he’s been outstanding. Since Anibal’s back from that hamstring injury and went on the IL, he’s pitched extremely well — a lot of soft contact — exactly the guy that we thought we were getting in free agency. But I think the most important thing that we’ve improved upon, we are playing much better defense. That’s helped the bullpen and the starting pitching. We are playing much cleaner games.”

Last night was the perfect example of how the confluence of defense and analytics has come together resulting in improved pitching. The defensive positioning especially with Juan Soto playing deeper has paid-off again as we saw last night when Soto caught a Rhys Hoskins‘ ball above the wall that robbed him of extra bases, and Brian Dozier had a defensive gem himself at second base. In football they say that “defense wins championships” and the Nationals are parlaying that into wins.

The current concern for the Nationals is the health of Max Scherzer who is suffering from a sore muscle in his upper back in the scapula area. Scherzer has already been scratched from his Sunday start, and the hope is he can pitch on Tuesday in Baltimore and in the finale for the four-game series on Sunday in Atlanta which is the ESPN Sunday Night game. Scherzer’s MRI showed no structural issues, and they are treating the sore muscle with treatment and anti-inflammatory medications.

“Tuesday’s realistic. That’s what we’re hoping for,” Scherzer said. “That’s where we are in just a matter of days here. This is not a major thing. We know exactly what this is. We know it’s muscular. The pause for concern is that we tried to get it going for the Kansas City start and wasn’t able to recover from the Kansas City start. Now you got to go on a little different protocol to make sure I’m 100 percent right before I step on the mound again.”

When Scherzer is healthy, the other issue has been the number five pitchers have collectively been horrible for lack of a better word. The number five spot has been filled by Jeremy Hellickson, Erick Fedde, Austin Voth, and Kyle McGowin. Their collective ERA is 5.54, and that is not acceptable because it has been translating to multiple losses every five games and stressing the bullpen. What you hope for is to take the arms you have and keep them fresh and hope for some Fool’s Gold to shine like Voth did during his 2019 debut. Overall, Fedde has performed by far the best in the group with a starter’s ERA of 3.94 in six games, but he has averaged just below 5.0 innings per start. Otherwise, Rizzo could trade for a salary dump arm, and try to find someone near Fedde’s ERA who can provide more innings. That is easier said than done.

Two alternatives would be pairing Voth or Fedde with a competent long-man behind one of them or as we have previously suggested the team could rotate the number fives that the Nationals have between the Majors and Minors in an effort to keep them fresh. The Dodgers have been successful for years rotating players and gaming the IL, but the Nationals have players with Minor League options and do not need to cheat the system.

Most of the teams vying for playoff spots need number one or number two pitchers. The Nationals just need a competent number five and a healthy Max Scherzer, and a back of the bullpen where manager Dave Martinez does not feel like he must pitch Sean Doolittle with a four-run lead in the ninth inning. By the way, with the Nationals bullpen shutout last night, and the Orioles bullpen meltdown, the Nationals are no longer the worst bullpen in the Majors as the Orioles take the current crown with a 6.05 ERA. 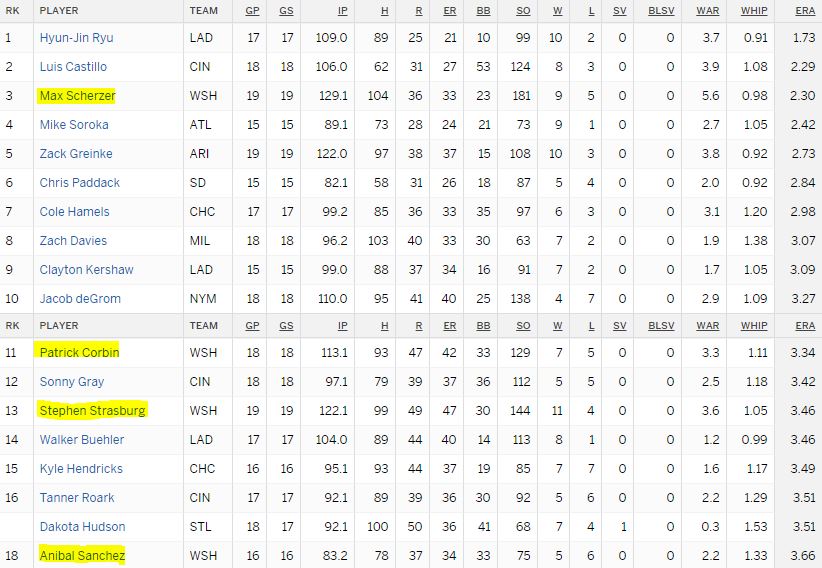