Max Scherzer pitches another gem to wrap up his pre-All-Star game record! 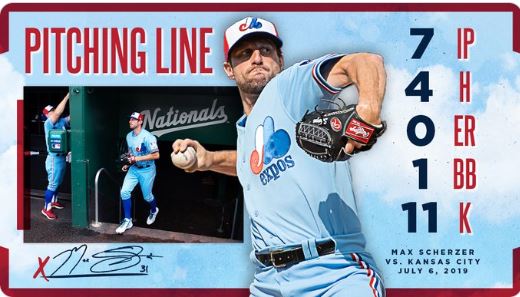 On Expos Day, it was a good day as Max Scherzer got the Washington Nationals back in the winner’s circle with a gem of a game. He struggled in the first inning, but then settled down to throw a 7.0 inning shutout with only 4 hits and 11 strikeouts. Scherzer is now 3rd in the Majors in ERA at 2.30 trailing only Hyu-Jin Ryu at 1.73 and Luis Castillo at 2.29. Scherzer only trails Castillo by the smallest of margins by .01. Of course Scherzer leads all pitchers with 181 strikeouts. More importantly,  Scherzer has now win seven consecutive starts for his team. By going 7.0 innings of “no drama” baseball, the Nationals got him 6-runs of support, and Scherzer did the rest in this 6-0 win whole resting most of the bullpen.

The Nationals offense got to Glenn Sparkman early and often, and really should have won by a larger margin except for baserunning blunders from Adam Eaton and Max Scherzer. Yes, Scherzer had a stolen base but then wandered off the base when Trea Turner hit what would have been an infield single and Scherzer was thrown out at second base. Eaton ran threw a stop sign in the first inning and was thrown out at home. Fortunately, the six runs scored were enough and powered by a 2-run home run by Kurt Suzuki.

Because Scherzer went so deep and low stress, Tanner Rainey and Matt Grace closed out the game resting Sean Doolittle for the third game in a row, and giving much needed rest for Fernando Rodney and Wander Suero.

The Nats close-out the series tomorrow with Patrick Corbin on the mound for a 1:35 start time before the All-Star break begins.