A bullpen save like you have never seen before! 5-in-a-row! 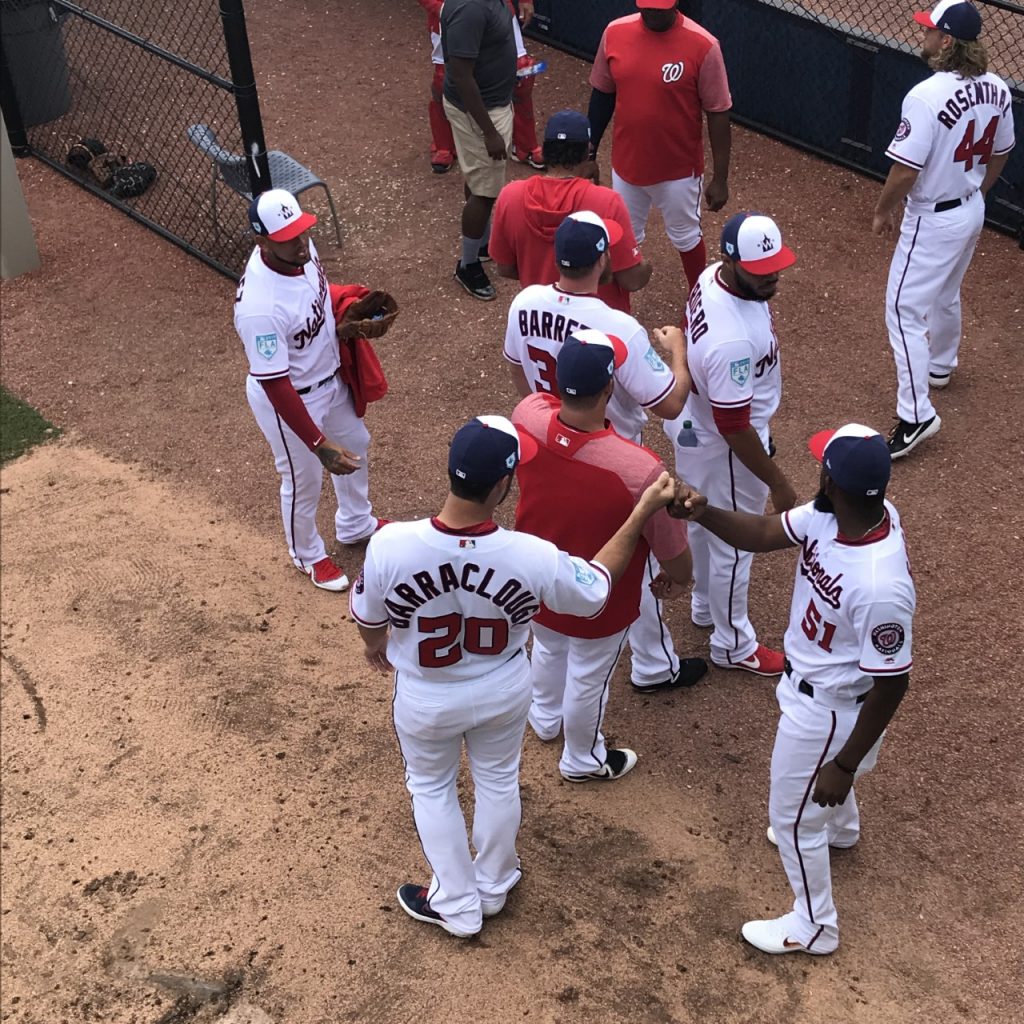 Who says baseball is boring? Stephen Strasburg departed with a 4-3 lead and handed the bullpen the ball to get the final nine outs with a one run lead against one of the hottest teams in baseball. Getting those nine outs were must-see baseball. The issue at-hand was that manager Dave Martinez did not have most of his bullpen available due to the heavy workload necessitated by the doubleheader two days ago and a taxing 5 1/3 innings the bullpen had to cover  yesterday due to Erick Fedde‘s short outing. The term “bullpen save” had multiple meanings in this game. Saving and redemption have a much deeper meaning. Maybe Trevor Rosenthal did not literally rise up from the ashes like some mythological character, but this could be the start of his save.

“As you guys are all aware, we had a couple of the guys in the bullpen who were [not available] and the rest of the guys stepped up just like I said, and in a big inning you need them all,” Martinez said. “Like I’ve told you before, we just can’t go with three guys. All of these guys have to pitch and do their jobs, and they proved it tonight.”

For the first call to the bullpen was Javy Guerra  who got the 7th inning, and he was nails. For the 8th inning, it was the lefty Tony Sipp who gave up a double while getting two outs, and Martinez called on the shaky Trevor Rosenthal to face the rookie Austin Riley who already had a two-run home run in this game. When Martinez handed the ball to Rosenthal, he told him “this is your moment — enjoy it.”  For those who do not remember, this is the same Rosenthal who had an ERA of infinity for his first four appearances of the season and entered the game with a 19.50 ERA including no high leverage appearances and was put on the 10-day IL and left in the minors for the maximum 30-days to rehab. Rosenthal dotted a 100 mph fastball that lit up the stadium radar gun (99.8 in actuality) and Riley rolled over the ball for the third out as he stranded the inherited runner at second base which was the potential tying run. That was one of the top moments of the season as Rosey exited the field to applause and congratulations from his teammates who understood the enormity of that one out. Next it was time for Wander Suero who had — zero — career saves before tonight got the 9th inning, and the umpire went to a postage stamp strike zone. Suero gave up the dreaded lead off walk then a single with no outs then got the next two batters. With two outs and two on-base, Suero induced a shallow pop-up into the “Bermuda Triangle” and out of nowhere Victor Robles slid towards the infield catching the ball in the play of the year for the final out and Suero’s first save.

At one point in this game, the Nationals were behind 3-0 then they clawed back into the game with great defense behind Strasburg and some timely hits and it was the Nats who scored four unanswered runs to make that final score 4-3. Stephen Strasburg earned the win and in Dallas Keuchel‘s 2019 debut, he took the loss. It was a tremendous comeback win that could have been spoiled at any time if the Braves came through just once in a RISP spot. They finished 0-9 in the game with runners in scoring position. Much of the credit to the Nationals pitchers, defense, and defensive positioning. Small plays in the game like pinch-hitter and previous thorn in the side of the Nats, Charlie Culberson, hit a top-spin liner to rightfield that looked like a game tying single in the 9th inning and Victor Robles was playing him shallow. How? There was no margin for error in this one-run thriller and sometimes things go your way in this game of inches but you also make your own luck.

There had to have been at least three Web Gems in this one with Juan Soto making a catch at the top of the wall to rob Ronald Acuna on the first at-bat of the game. Later, Trea Turner made a slick diving play behind second base to rob the speedy Ozzie Albies who was ruled safe initially and overturned on a video replay challenge. The third Web Gem was the Robles play to end the game. Not only was the Turner and Robles plays Web Gems, they both got Top-10 on ESPN Sportscenter Top Plays. That was probably the most exciting game ending defensive play by a Nats player since Steven Souza Jr. saved Jordan Zimmermann’s no-hitter, and then there was Roger Bernadina’s unbelievable play when he caught a ball in Houston and ran behind the wall to save that game for Tyler Clippard. The Bernadina catch put the Nats 4-games over the second place Atlanta Braves.

The Nats offense put together a Yan Gomes home run of 447 feet with triples by Juan Soto and Victor Robles, and the game winning RBI was a doink over the shortstop by Anthony Rendon that actually hit the glove and did not stick. Talk about the game of inches. There was also the rare safety squeeze by Michael Taylor that scored the second run for the Nats. The Nats had plenty of baserunners and were a horrific 2-for-15 in RISP spots. Fortunately the lack of clutch by the Nats after the fifth inning did not come back to haunt the team. It was a two-base error by Ozzie Albies that started the Nationals three run rally in the 4th inning so the Nats did take advantage of a huge mistake by the Braves.

Maybe this game was about never giving up and redemption. Struggling players like Michael Taylor and Yan Gomes had big RBIs while Trevor Rosenthal got his biggest out as a Nat.

“Electric night all around,” Rosenthal said. “Just a great baseball game. Great night. Great weather. It was amazing. I think everyone really enjoyed that.”

With this win, the Nats moved within one game of .500, and they picked up a full game on the division leading Braves. The team also takes a season’s best five game winning streak to tomorrow.