A tour of the Negro Leagues Baseball Museum

The story is presented as a timeline, starting pre-Civil War. The baseball story is presented in parallel with other relevant events in US history: the baseball story above, and the timeline below. Artifacts and historical reproductions of photos, newspapers, posters, cartoons, etc., enliven the exhibits. The story continues through the false starts, the organization, management, and eventual demise of the Negro Leagues. There is some film of Negro Leaguers (i.e. East-West Games), and of course film of Jackie Robinson. There are exhibits covering the women who played in the Negro Leagues and the how differently the players were treated when they played elsewhere (Mexico, Caribbean).

So why the timing of this trip?  Well, there was this on-line auction of Yankee memorabilia . . . and one signed ball from the 1982 Negro Leagues reunion. I got lucky because the Yankee collectors didn’t bid on it, and the Negro League collectors didn’t know to look. So I became the lucky (temporary) owner of this ball. Over the winter, I’d rotate the ball, look up a signature, and read about the player in the Biographical Encyclopedia of the Negro Leagues (in lieu of “staring out the window waiting for spring”). But, realistically, this belonged in the public domain, so I planned a trip to the museum to see it and deliver the ball. A pair of signed balls from the 1990 reunion came up on eBay, so I snagged those to go with the 1982 ball. 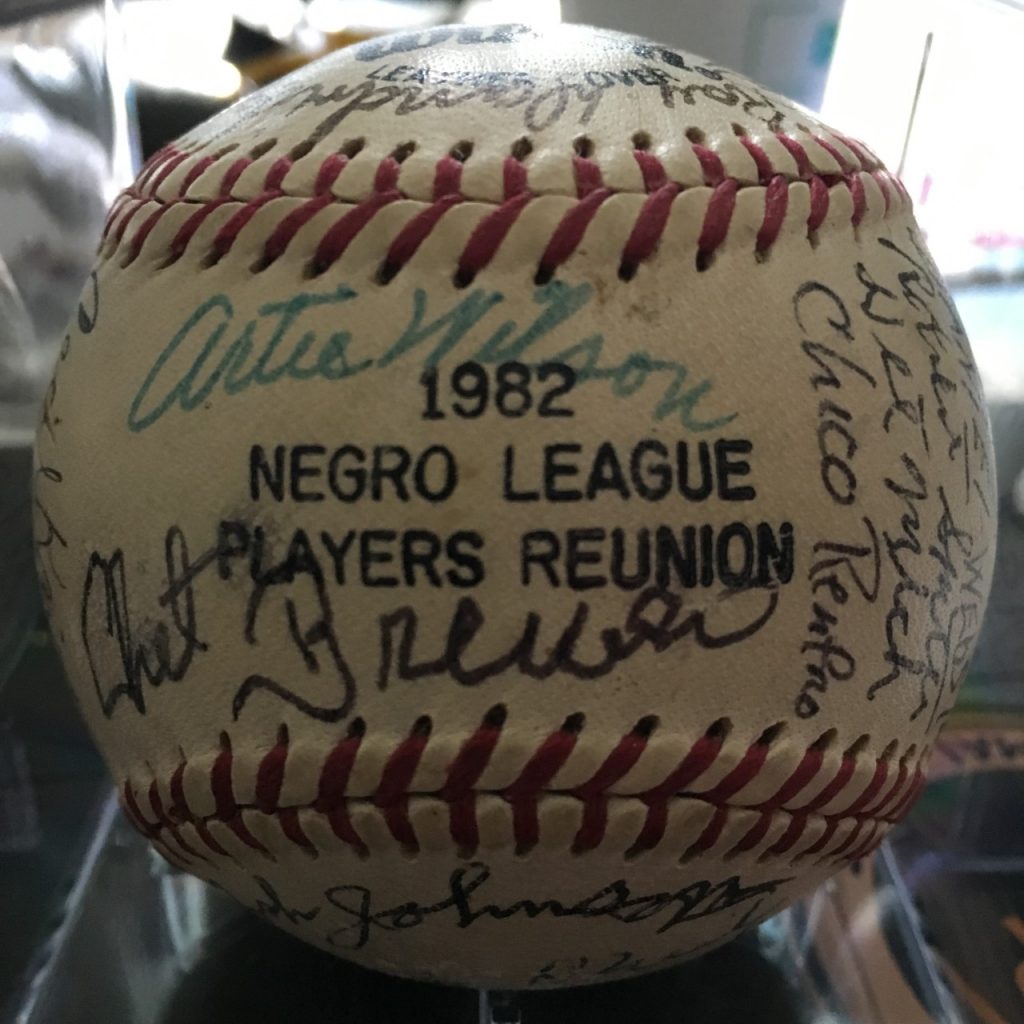 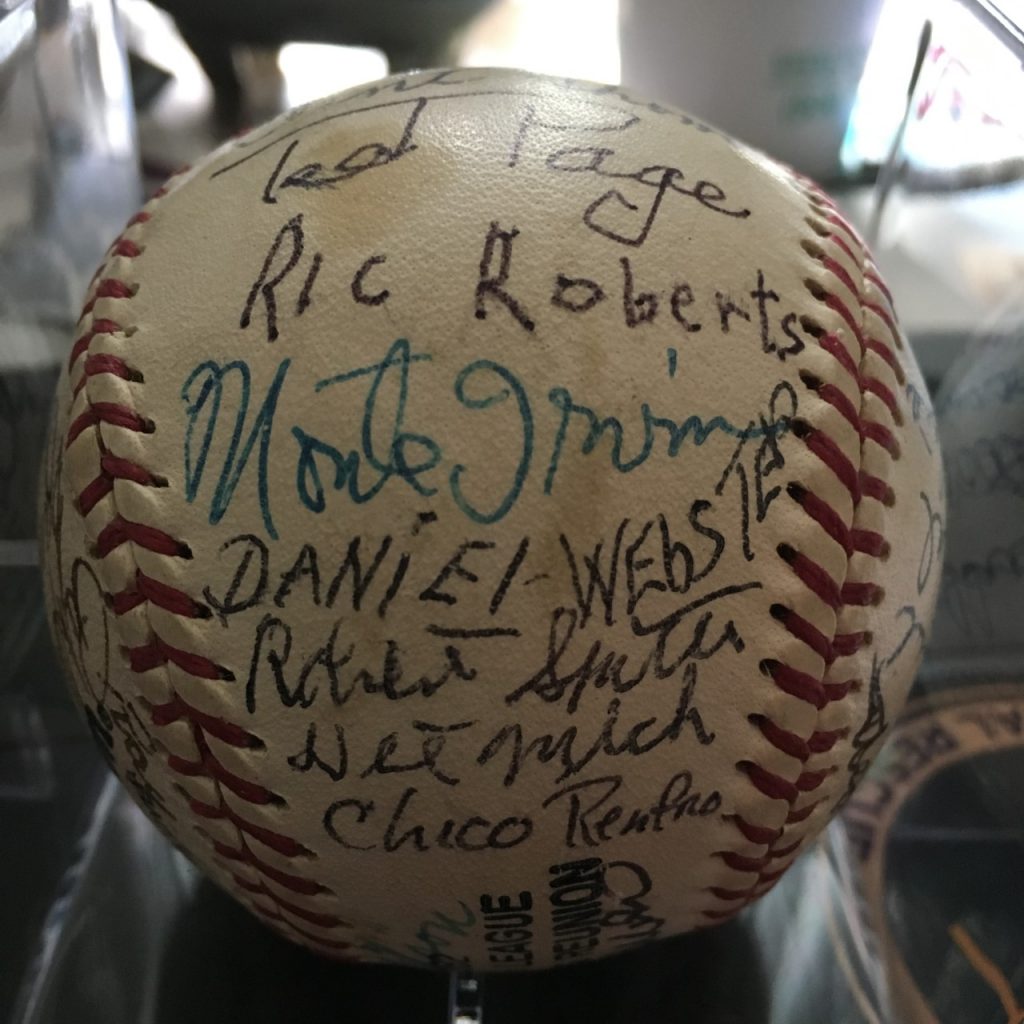 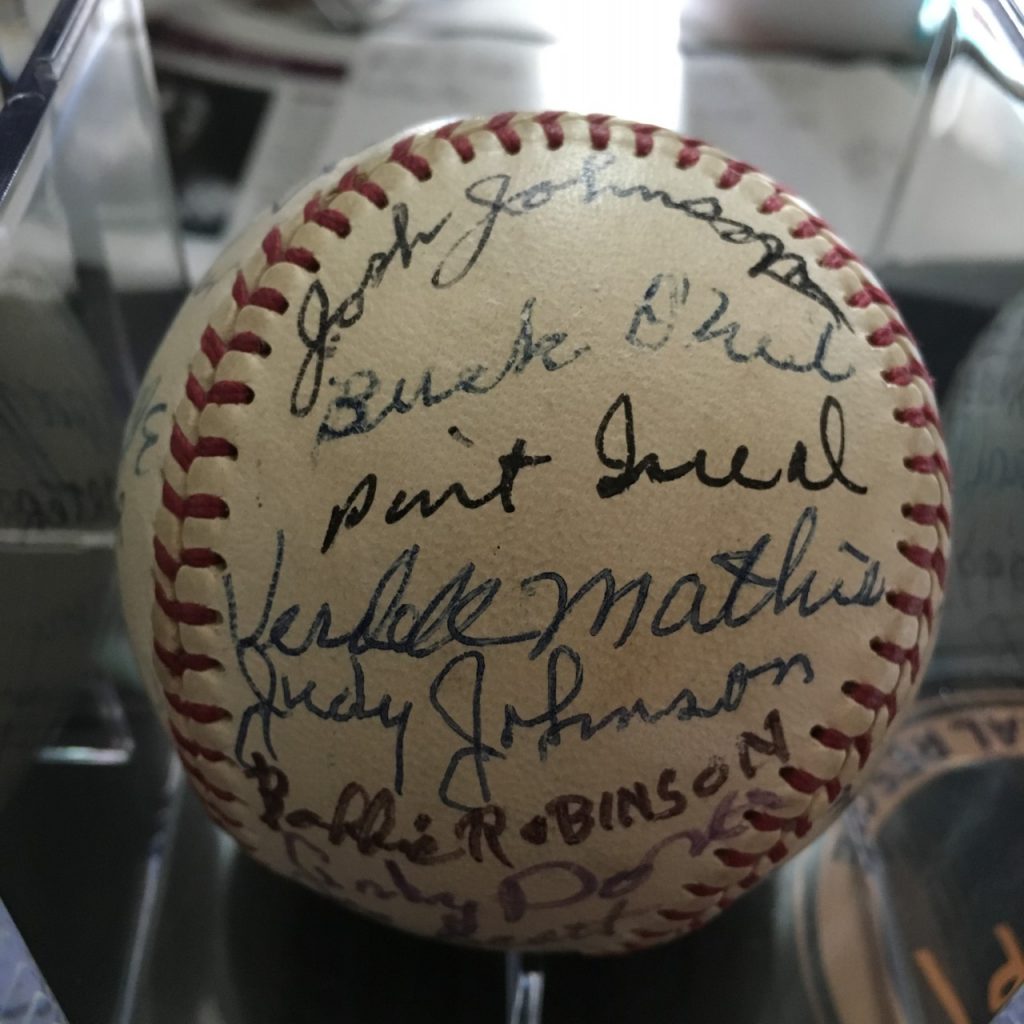 So, since the Nationals didn’t go to Kansas City this year, I went with the second-best choice of cheering the Royals against the Phillies to schedule the trip. (Note: the banner worked: the Royals won the game we went to). 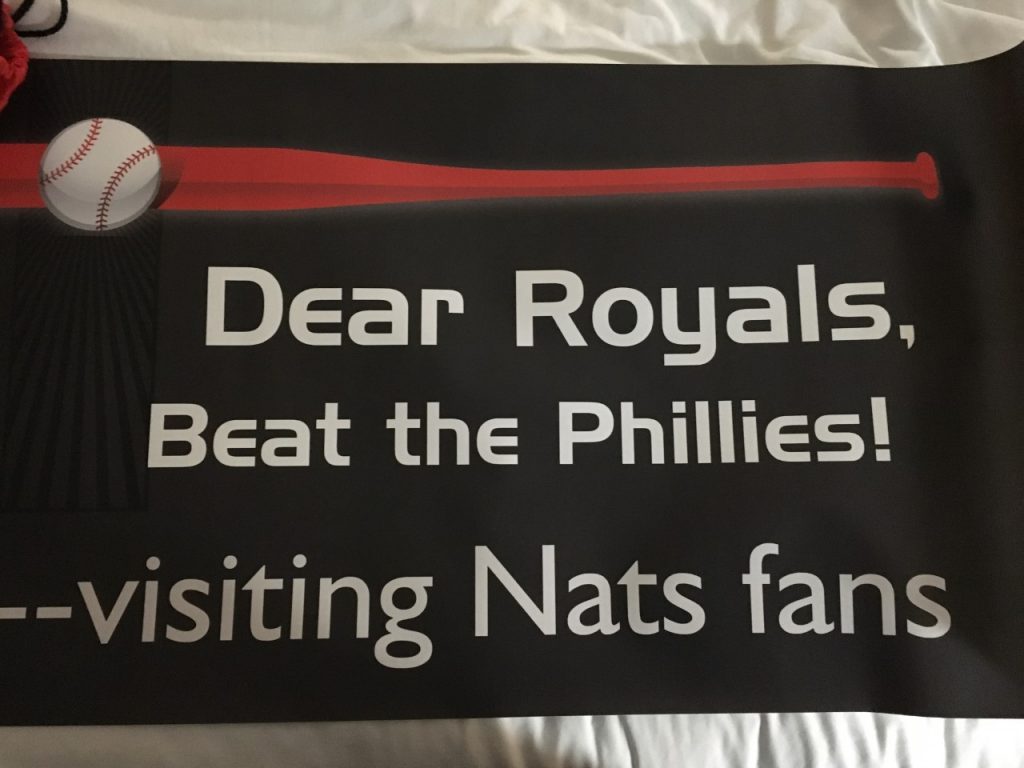 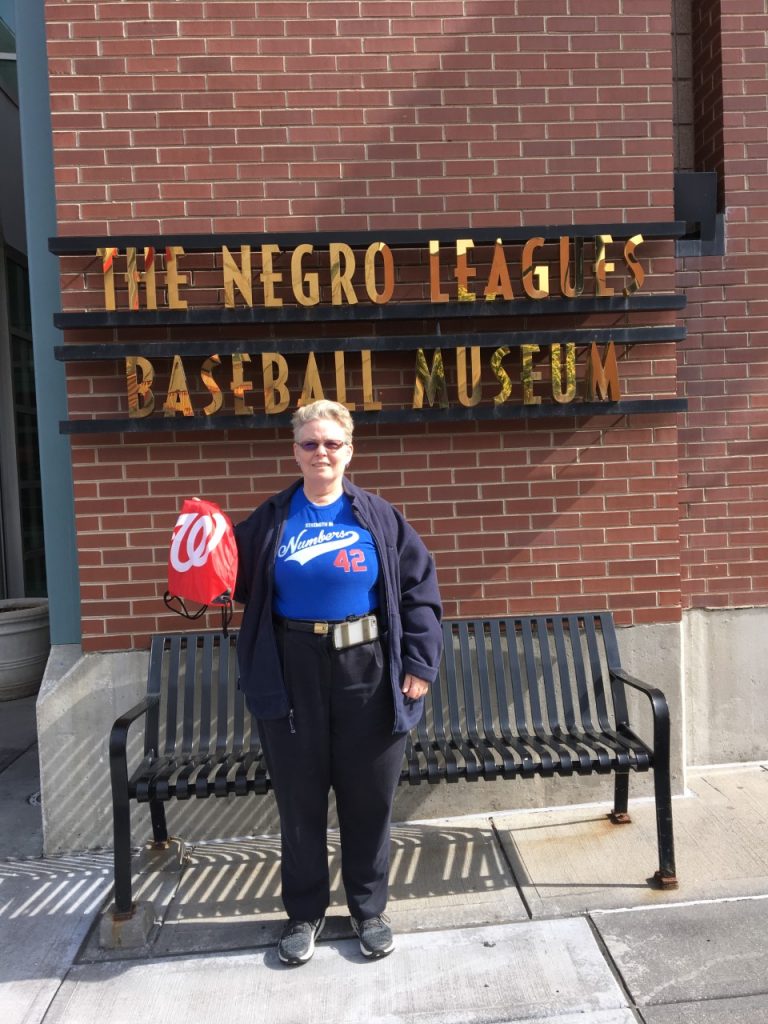 The museum also includes a field of bronze statues of Negro League greats.  Of course, Paige is on the mound. 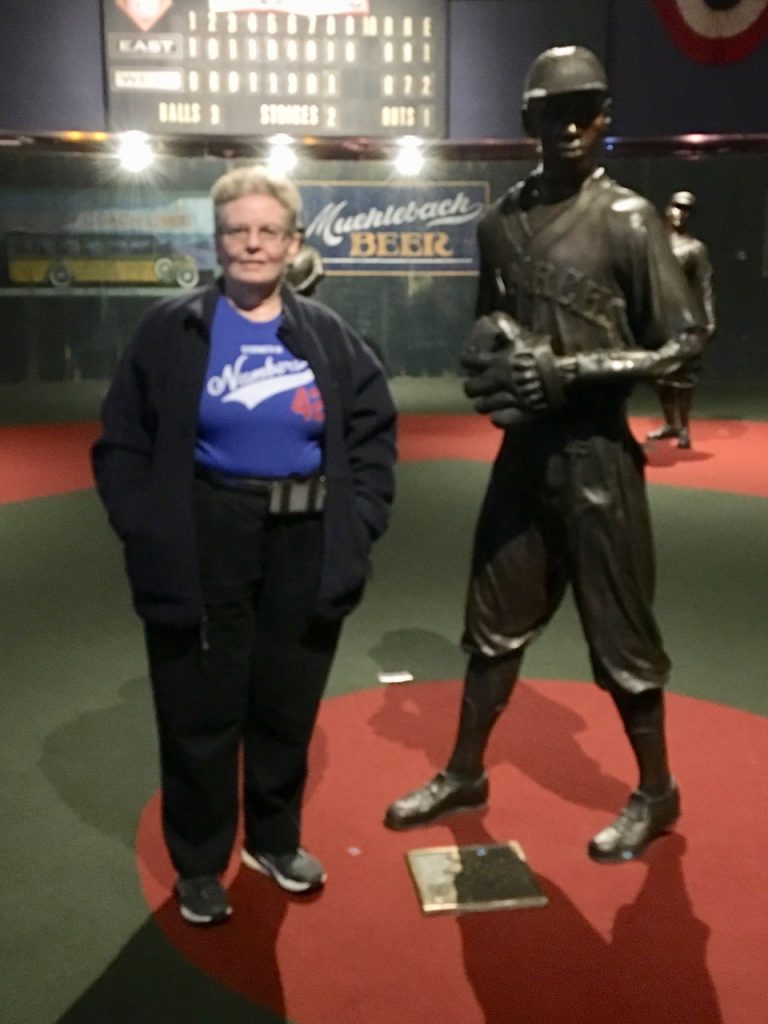 The museum is in the same building as the American Jazz Museum. If you like music, you can spend an entertaining afternoon listening to recordings by the jazz greats (either vocals or instrumentals).  This museum has fewer pieces of memorabilia, but the music samples make up for it.

Other worthwhile stops in Kansas City are the WWI museum (you’ll need a whole day), and the Nelson-Atkins Museum of Art (half to full day, depending on your level of interest). It includes this piece representing the life of Satchel Paige. 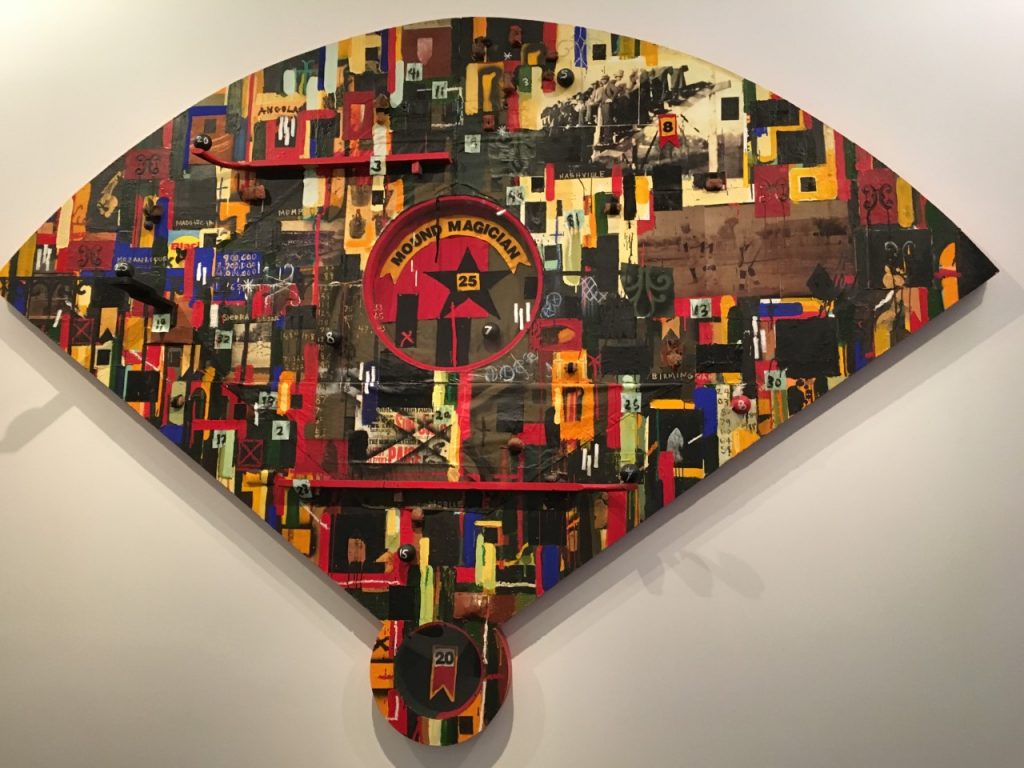