Game #35 Sloppy play must end; Rendon due back today

The player we affectionately call “Tony Two Bags” is due to come off the 10-day injured list today. The Nationals were a .500 team at 9-9 when Rendon was at 3rd base until the day that he was plunked on the elbow. Since, then the team has unraveled with some of the sloppiest play we have ever seen in the history of the Nationals. This team in the past three days has accumulated nine charged errors in the field and several more plays that should have been made. On Sunday it was Jake Noll apologizing for a first inning error that allowed two runs to score, and Carter Kieboom last night botched a grounder and did not snag a liner at glove’s reach that resulted in the only two runs (one earned) against Max Scherzer.

Will the 21-year-old get another chance tonight? Probably not if Rendon is indeed activated off the 10-day IL as the Nationals could decide to play Wilmer Difo at shortstop the rest of the way until Trea Turner returns from his injury. While it is good to hear when a player is accountable like Kieboom was yesterday and Noll the day before, this is not the minor leagues — routine plays have to be made. You might as well replay manager Dave Martinez‘s postgame commentary on a loop because it is same old same old — just a different day.

It got worse when reliever Dan Jennings entered the game as the first reliever into the game. He pitched to contact and Brian Dozier could not corral a grounder on a tough play that resulted in a single to start the 7th inning, and then Kurt Suzuki could not block a pitch in the dirt that resulted in a wild pitch. The misery continued when Yelich hit a grounder to Difo who could not throw a strike to 1st base that was also ruled a single, and you could feel the wheels coming off the wagon — and they did after another grounder found a hole then a fielding error on a swinging bunt that Suzuki botched. In Jennings’ defense, he did not pitch all that poorly, but was bit by the poor defense behind him and in front of him.

The excuses were mounting on the MASN broadcast due to the team’s lack of sleep, however Scherzer was sharp and he got as much sleep as the other players. It just cannot continue on this “Groundhog Day” perpetual motion of mistakes. We were promised the “Little Things” would be executed and the team would not give more than 27 outs, but night after night we are forced to watch minor league quality defense. And where are the spectacular plays? Other than Matt Adams diving play that he resulted in an injury, when is the last time we saw a play that made you go WOW!? We have seen so many bad reads in the outfield that you cannot believe what we are watching then on throws from outfielders we saw another 3-bouncer to the plate last night.

Firing pitching coach Derek Lilliquist has not made a difference rather we have seen the starting pitchers stretched to exhaustion and more inconsistent use of the bullpen.

Last night, we saw two more injuries as both Yan Gomes and Andrew Stevenson had to exit the game. Gomes was hit near his elbow by a pitch, and Stevenson appeared to have hurt his oblique.

For today’s game, Stephen Strasburg is on the mound and the Brewers send righty Adrian Houser and his 8.44 ERA. The Nationals have never faced Houser before. 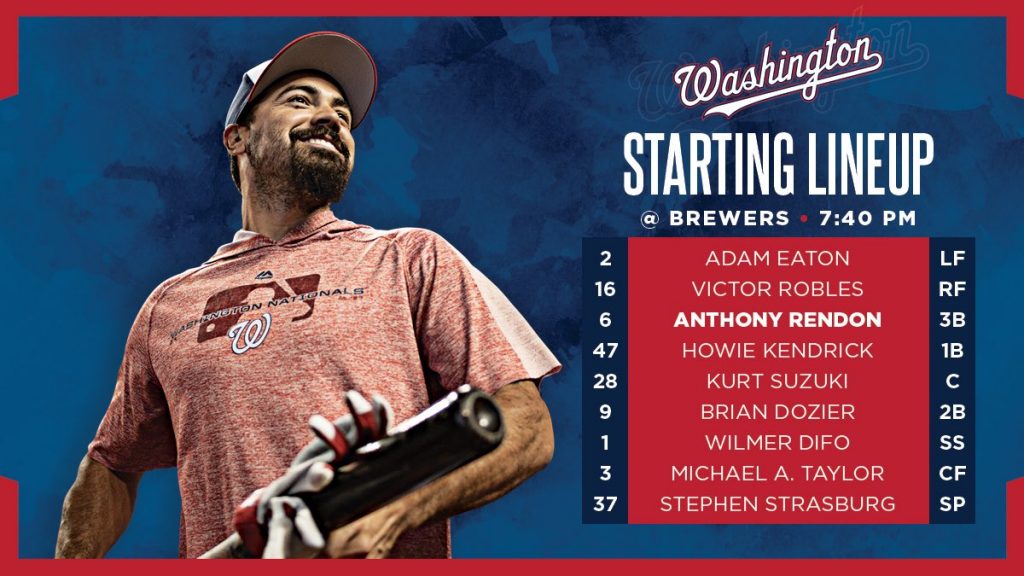